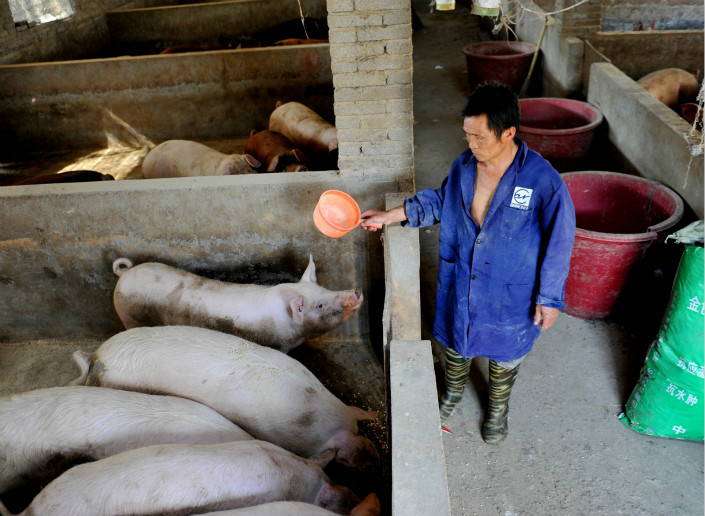 The consumer price index (CPI), which measures the prices of a basket of consumer goods and services, rose 2.3% last month from a year ago, up from an increase of 1.5% in February and marking its highest level since October, according to data (link in Chinese) released by the National Bureau of Statistics (NBS).

The pickup in consumer inflation was mainly driven by food prices, which rose 4.1% year-on-year in March, picking up from 0.7% growth in the previous month. The average vegetable price increased 16.2% year-on-year during a low season for vegetable production, contributing 0.42 percentage points to the CPI growth. The price of pork increased 5.1% year-on-year amid an ongoing outbreak of African swine fever, marking the first rise in 26 straight months.

The producer price index (PPI), which gauges changes in the prices of goods sold by manufacturers and mining companies, edged up to 0.4% year-on-year last month from a near-two-year low of a 0.1% rise in February and in January, NBS data show (link in Chinese).

On a month-to-month basis, the PPI rose 0.1% in March, marking the first increase in five months, the data show. “This was almost entirely driven by a rise in the cost of raw materials, particularly oil,” Julian Evans-Pritchard, an economist with research firm Capital Economics, said in a note.

“We expect oil prices to fall back in the coming months. This will drag down (the) PPI (growth), though we expect the impact on (the) CPI to be offset by a further rise in pork prices,” he said. “Continued economic weakness is likely to keep a lid on broader price pressures.”

African swine fever has led to decreasing pig stocks and reluctance among farmers to breed their animals, causing a pork shortage that has pushed up the price of the country’s favorite meat. Analysts at brokerage Citic Securities Co. Ltd. expect pork prices to be the main driver of CPI growth in the future. But the CPI probably won’t rise significantly as other factors that affect it are likely to remain subdued, they said in a note.

Economists at Nomura International (Hong Kong) Ltd. hold a similar view. “The acceleration of CPI inflation comes mainly from pork prices rather than a general rise in prices,” they said in a note.

Beijing expects the CPI to increase around 3% this year, according to Premier Li Keqiang’s government work report (link in Chinese) released in early March.