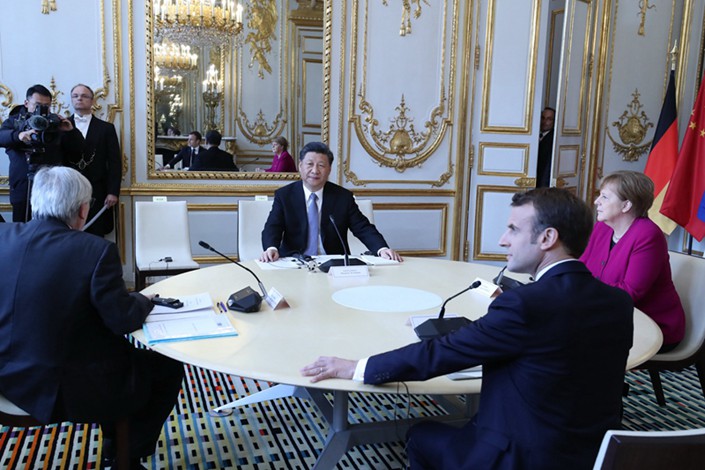 Washington’s trade disputes and on-going negotiations with Beijing are now, even more apparently than late last year, part of a wider American strategy to contain China. The core battlegrounds are wherever Huawei aspires to build 5G networks, and whenever nations consider joining Beijing’s Belt and Road Initiative. The United States’ resistance to Chinese technological development is both political and commercial. Having failed to invest enough in wireless innovation over the last two decades, U.S. telecommunications companies are struggling to build leading-edge, globally-compatible 5G systems to compete with Huawei. Washington strives to restrict China’s ability to acquire Western technology, but underestimates the degree to which China is developing its own.

In 2017 the Chinese government invested the same amount in technological research and development as all other major countries combined, approximately $300 billion. Lacking the disposable financial resources available to China, the U.S. is struggling to contain a country that cannot be contained, maintain the dependence of nations that sense they can no longer rely on Washington, and sustain a prestige that the White House itself diminishes by the month through erratic domestic policies and confused global agendas.

Where China offers investments and increasing purchases from Western countries, the United States largely threatens nations that consider cooperating with China. Some Eastern European nations, Canada, and Australia appear to have thrown their lot in with Washington, but in the face of equivocation on the part of the U.K. and the European Union, it is no longer certain that Washington will succeed in retaining the loyalties of enough of its former Cold War allies for an effective containment strategy.

There is an assumption on the part of Western countries that their shared social and legal systems form an immutable bond, but this is unlikely to endure in the face of Washington’s tactics. The U.S. is pushing its traditional allies away as it focuses almost exclusively on bilateral trade negotiations, and failing to form the alliances that would extract concessions from Beijing more effectively. China will take advantage of the space this offers it to increase its global commercial engagement and secure the resources, technology, and know-how it needs, while diminishing the effects of American pressure.

In this fractured situation, few nations are secure and most are uncertain. The U.S. tends to react from outdated Cold War principles, and China struggles to assess its economic and strategic relationships in a deeper and more nuanced manner. China lacks the diplomats and trade negotiators needed to meet the present demands of dealing with its adversaries and trading partners. This multilateral wrangling has already become the norm, unlikely to change for many years to come. China will need to avoid the stilted, doctrinaire language of the past, and improve its ability to communicate with diverse countries and regions swiftly and with empathy.

On President Xi Jinping’s recent trip to Europe, Italy became the first G7 nation to formally join China’s Belt and Road Initiative, signing deals worth $2.8 billion and agreements to develop the ports of Trieste and Genoa. Vaunted as great successes in the Chinese media, they were not, however, an indication that all Eurozone countries would follow Italy. The deals reflect more Italy’s deep economic stresses than shared preferences for Chinese partnerships in the Eurozone.

President Emmanuel Macron invited Chancellor Angela Merkel and European Union President Jean-Claude Junker to join him in meetings with Xi Jinping in Paris, where discussions about market access and WTO reform were unusually pointed. European leaders seem to understand the considerable benefits of dealing more closely with China, but also see China’s increasing need for friends and economic alliances. They are trying to deal with China from strength and extract what they can, while standing up to, but not alienating, the United States.

France and China signed deals worth 40 billion euros ($45 billion), 30 billion euro of which was for the purchase of aircraft from Airbus, but Macron and his peers pressured President Xi more firmly than in recent years to afford European companies greater access to China’s market. They also asked for fairer regulatory treatment to allow European companies more equal footing with their Chinese counterparts, especially state-owned firms.

Macron and his allies are correct in asserting that foreign firms face issues competing in the domestic Chinese economy, but the Western advocates for more radical change often miss the fact that China’s policy direction is increasingly in favour of more even treatment. China’s need for resources, technology, and markets beyond its own borders means it cannot disengage from global markets and the principle of free trade. No developing country in history has opened its market as swiftly as China has over the last three decades.

China’s ranking in regard to ease of doing business, according to the World Bank, improved from 78th in 2017 to 46th in 2018. After surveying its members, the American China Chamber of Commerce reported in 2017 that 96% of respondents felt that intellectual property rights enforcement in China had improved over the previous five years, compared with 86% in 2014.

Many of the longer-established foreign firms forget the privileges extended to them in the first 20 years of economic reform, such as preferential investment policies, three-year corporate tax holidays, and lesser benefits such as rebates for expatriates for expenditure on housing and education. For more than two decades, most foreign industrial firms shipped kitsets for assembly to their Chinese joint ventures, ensuring offshore corporate profitability even before the containers landed. Foreign pharmaceutical firms frequently made surface adjustments to the formulas of their basic drugs in China, allowing them to sustain patent periods for years after the same patents had expired in the West. China also contends with some ground that it faces increasingly prejudicial policies when trying to acquire assets or expand distribution in the eurozone and the United States.

There are injustices facing foreign companies, particularly in sectors where the Chinese state has made significant investments, and these need to be addressed over time. But when one is accustomed to privilege, even relative equality can feel like injustice.

The United States’ actions risk pushing its relationship with China toward a state of cold war, although direct conflict is far from imminent. Currently, each side imagines and fears the aims of the other, and sees threats and coercion as means to achieve their objectives. The U.S. and China would be better to take confidence in their own histories and systems — focusing less on their differences — to negotiate from strength rather than, in China’s case, a sense of historical victimhood, or for the U.S., anxiety over its diminished influence.