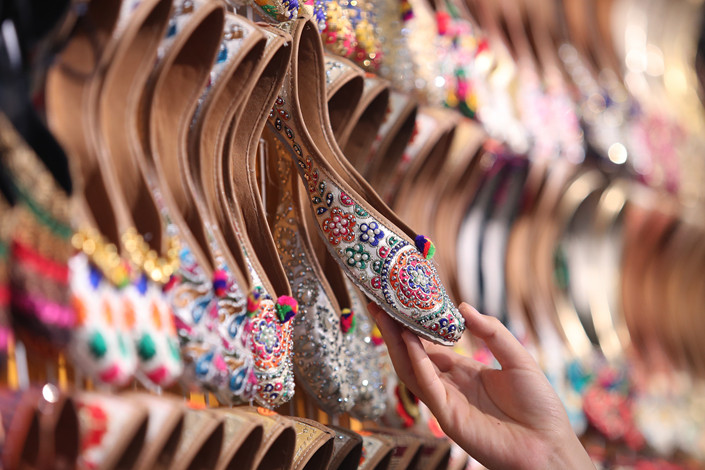 Indian embroidered shoes are displayed at the South Asia pavilion of a trade fair in Kunming, Yunnan province, on June 12, 2019. Photo: VCG

At a time when the United States is withdrawing from the world and many multilateral institutions, while slapping tariffs on allies and adversaries alike, India and China are moving closer together economically out of commercial practicality.

Indian-Chinese trade is booming, growing 34% in the nine months to April 2019. Indian mineral (largely iron ore) sales to China, accounting for one third of exports, exceeded $5 billion, an annual increase of 53%. The next largest category, chemicals, increased by 55%.

India’s trade deficit with China fell over the last nine months from $59.3 billion to $57 billion, although some Indian analysts have asserted that Indian imports from Hong Kong negated any reduction in the Chinese surplus. In the flux of supply and demand, deficits and surpluses are not necessarily good or bad, as long as trading partners’ economies are evolving. It is more significant that Chinese-Indian trade is growing and that consumer demand in India is strengthening.

Too much to lose

In past decades, India’s economic potential was constrained by internal cultural barriers and a lack of national consistency in law, commercial regulation and taxation; but its greatest impediment remains widespread poverty. As the world’s fastest-growing economy, it is evident that India is beginning to overcome some of its problems, just as China in the 1990s overcame its impediments of inefficient state-owned enterprises, an inadequate banking system and relative rural poverty. India has a long way to go, but is gathering momentum.

Although India is poorer than China (its per capita GDP is under $2,500, China’s is $10,000) it possesses abundant mineral reserves that China needs, such as iron ore, manganese, chromite, thorium and bauxite. India has adequate educational institutions, high levels of transparency, intellectual freedom and a vast diaspora, positioning it to compete potentially in the global technology sector. It rose three places in the World Digital Competitiveness Rankings in 2018.

China has much to gain by investing in India, tapping into its young labor force and growing consumer base. While China’s population is aging and its growth slowing, India’s population will remain young beyond 2035. India has increased its infrastructure investment three-fold since 2014, and the Modi government plans to build over 10,000 kilometers (6,214 miles) of national highways and mandate clean fuel for public transport in major cities to alleviate India’s pollution problems.

The Indian and Chinese populations (both approximately 1.4 billion) are their greatest liabilities, but also their greatest resources. China has allowed the thrust of urbanization to drive social change and economic growth, and 600 million people have been lifted out of rural poverty in China in the last 25 years; hundreds of millions more will head to cities over the next decade. Incomes in Chinese cities are three times those of the countryside, incentivizing village dwellers to move to the nearby towns, whereas in India, the increase in urban income is less than two-fold and the high cost of housing deters migrants. Throughout the 1990s and into the beginning of the 2000s, China had the benefit of converting its largely state-owned property to private leasehold ownership and then, through strict zoning, shaping the development of cities. At 90%, China now has one of the world’s highest rates of home ownership.

New Delhi has a fraught political relationship with Beijing, but as trade expands and investment in both countries deepens, the motivation for China and India to resolve their differences is increasing.

Indian GDP is presently equivalent to that of just two provinces in south eastern China. While this highlights the contrast in economic scale of the two countries, India’s annual GDP growth rate of 7% demonstrates its potential to evolve economically and opens up a future where each becomes a dynamic market and partner for the other.

India is often dismissed by the U.S. and Europe as the country that will never succeed, because although it adopted Western systems, such as democracy, its people are perceived as socially less advanced and hindered by corruption and superstition. Despite China’s economic achievements, many in the West think (or hope) that China will ultimately fail because, although it has become Western economically, it eschews many Western political systems. Such views are rooted in ignorance, colored by the West’s desire for global dominance and fear that Western strength will be undermined by the reemergence of civilizations such as China and, to a lesser extent, India.

As long as the world’s two most populous nations, with differing but equally deep contiguous histories, remain strategic adversaries, they will be the weaker for it. China tends to place less importance on India, because it is economically smaller and poorer; the West made the same mistake in viewing China in the 1990s.

If India and China can capitalize on the present increase in trade and investment, and look to their own cultural and philosophical traditions for templates for the future, they may develop new effective social and economic models that will differ, but allow them to form an unparalleled strategic and cultural partnership — not as Western-style nation states, but as two enlivened, reformed, dynamic civilizations.