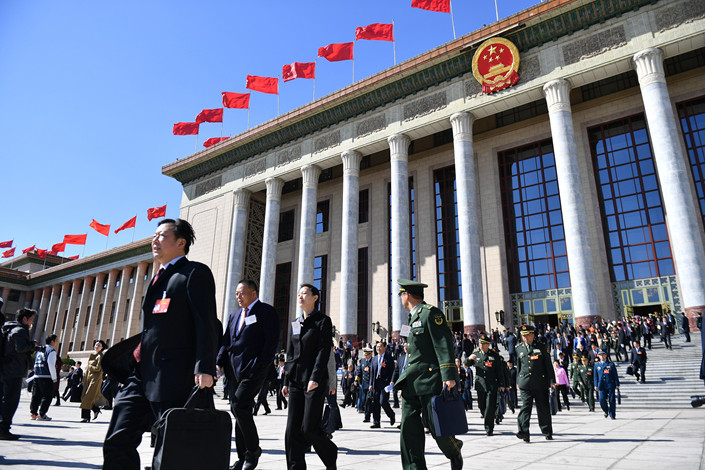 At the beginning of the National People’s Congress (NPC) this March, Chinese Premier Li Keqiang announced policies and set targets that will have considerable impact on the dynamism and balance of the economy. Value added taxes will be cut from 16% to 13%, and taxes on small enterprises will be reduced by up 10%. Premier Li announced that state-owned banks will increase lending to small and medium sized businesses by 30%.

Although these central policies may be distorted in implementation by provincial and city interests, the financial system’s increased attention to the needs of the private sector is encouraging. More policy changes are needed to address the structural flaw that the financial sector is often driven more by local government fiat and intervention than the market. The Chinese government also needs to better enfranchise nonstate banks, needed more than ever now that shadow banking has been curtailed.

It appears that China has gradually been stepping away from its practice of setting fixed gross domestic product (GDP) targets, which provincial officials were incentivised to meet by almost any means, often regardless of the economic value or environmental cost of the projects they initiated. The government has set a GDP growth “band” for 2019 of between 6% and 6.5%. Given growth over the last two quarters, GDP is likely to expand by around 6.2% this year, which is more than adequate for an economy with a nominal GDP of just over $14 trillion.

Many economists and commentators in the West are fixated with the fact that China’s GDP growth is the slowest it has been in 30 years, but the idea that China’s GDP must grow at the rates seen in the mid-2000s to maintain momentum and employment has little relevance to the economy of 2019. Such is the present scale of the economy that when China was growing in excess of 14% in 2007, it added roughly 5 trillion yuan to its nominal GDP, but with “only” 6.6% growth in 2018, China added around 8 trillion yuan.

In some regions, the government has been overzealous in cracking down on shadow financing, to the extent that a lack of credit available to private companies has created a drag on the economy. But it is better in the medium to long-term that the government has somewhat oversteered in its deleveraging than allowed debt to accrue further, which would have sent false growth signals, increased Chinese banks’ and enterprises’ liabilities, and heightened systemic risk.

As the Chinese government faces increased external pressures and the fear that growth may slow too much, some commentators have argued that it might undo the good that deleveraging has brought to the economy and loosen credit substantially, boosting short-term growth but deepening future economic risk. The policies outlined at the NPC indicate that this is not the government’s current intention.

Premier Li warned that 2019 would be a difficult year, citing mounting global protectionism and unilateralism, and forecasting falling domestic consumption. The tariff disputes between the United States and China have had negative effects on their economies, but the more damaging factor has been the loss of business confidence. If business confidence were to deteriorate further, it would risk slowing or even stalling the Chinese economy. In fact Chinese businesspeople and officials need not lose confidence, for even in this environment of increasingly global acrimony towards China, underlying domestic productivity and consumption are strong.

As China comes to an uneasy and probably short-lived truce with the United States on trade tariffs, the present challenges to confidence in China will abate. The White House needs to show the American people it has achieved something significant, after shouldering much of the blame for the federal government shutdown and bungling the summit with North Korea, all the while fielding renewed allegations of presidential misconduct. The current administration will be hoping that in the approaching countdown to a presidential election, even a flawed trade deal may help lift a flagging American economy and boost capital markets.

Beijing is determined to resolve the trade disputes soon, but must resist Washington’s intentions to audit compliance of any trade accord inside Chinese institutions. American demands are so invasive that they would constitute an effective requirement that Beijing relinquish its economic sovereignty.

Many of Washington’s concerns are outdated, such as its allegations that China manages the yuan exchange rate for an unfair export advantage. Short of being fully convertible, the yuan is genuinely open to global currencies in the perimeters within which it trades daily, and therefore is more rationally valued and stable than it has been in years. Washington’s desire to have detailed economic oversight of China is as unreasonable and unrealistic as its aims to contain China’s continued evolution. The World Trade Organisation, not Washington, should be the body to monitor that the details of any agreement are upheld.

The United States will continue to deal with China coercively, regardless of any interim trade deal, or whether the Republicans or Democrats run Washington. But Chinese citizens have a greater capacity than their American counterparts to endure economic downturns that may result from future trade tensions. There is relatively little middle-class household debt in China compared to in the United States. The average savings ratio of Chinese households exceeds that of American households by more than twofold. Chinese household consumption grew by around 8% year-on-year in the final quarter of 2018, and consumption of goods and services accounted for 76% of China’s GDP growth last year, up from less than 50% in 2013. China, despite being inextricably integrated to the global economy, is no longer overly dependent on trade.

Some of the economic policies announced at the NPC lack depth, particularly those related to foreign enterprises. The haste in policy adoption and lack of consultation with foreign chambers of commerce in Beijing is disappointing. At a time when China faces resistance to its international commercial endeavours, it would benefit to do more to show its fairness in dealing with foreign enterprises operating in China. It is not a matter of placating China’s more ardent critics, but equipping those in the West who have more balanced views with evidence that China is not succumbing to the rising global trend of economic nationalism and protectionism. The Chinese government has spent three decades struggling to balance these forces at home, and the potential for their resurgence must not be underestimated. Foreign companies often fail to realise that small and medium-sized Chinese enterprises suffer as much as they do from unfair competition from larger state and privately-owned companies. China’s is a market with too many monopolies. For China to continue to protect its larger domestic enterprises as if they were still flawed entities in a struggling, developing nation demeans them and the country.

The Chinese government can draw comfort from the fact that Asia, with its five billion people, constitutes 50% of global GDP and trades more within itself than with Europe or North America. It is right for China and other Asian countries to be increasingly confident in their economic dynamism, while recognising that the United States and Europe have been vital partners in Asia’s rise. If Western leaders could understand that it is in their nations’ interests to continue co-operating with China rather than struggling to contain it, they might halt the decline that so many of them fear.

David Mahon is executive chairman and Charlie Gao is a partner at asset management and corporate advisory firm Mahon China.