Opinion: Opening the Economy as Critical Now as It Was When Deng Created Private Sector in 1980s 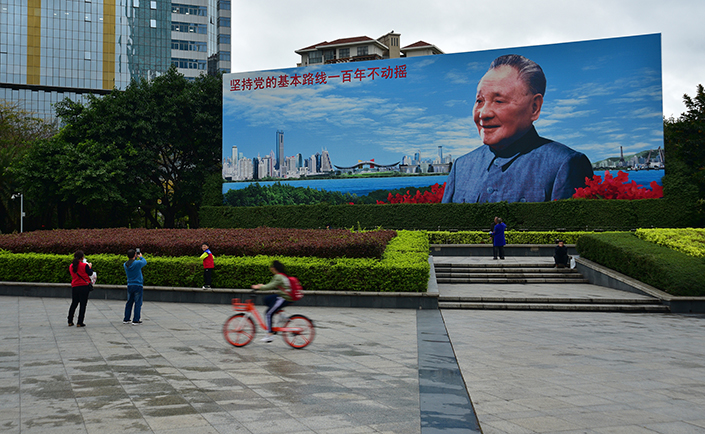 The United States wants China to capitulate to its demands as it continues to dictate punitive terms in the current trade dispute. China should offer greater market access to foreign firms, particularly to its service sector, yet this is no longer a negotiation.

Washington is not working from clear commercial principles but muddled ideology, partly founded on the doctrine of rules-based global free trade, which it does not obey itself, and on a desire to blame its trading partners and particularly China for its own economic imbalances. Ideology is not strategy. The U.S. cannot win this confrontation, but it will inflict damage on the Chinese economy, global economic confidence and its own households.

The current, misleadingly strong economic growth in the U.S. is the result of swinging tax cuts and significant government economic stimuli, not true gains in productivity, and will have to be amortized within the next two years. The U.S. cannot afford a trade war, despite claims that they are “easy to win.”

Perhaps Washington will revert to political and commercial self-interest and reach a temporary agreement with Beijing after the U.S. midterm elections and the year-end peak consumption season. The current U.S. leadership appears to be driven by a single objective — to contain China’s rise as an economic and strategic power. Somewhat normalized trade relations will not change this.

Of the 25 largest exporting companies based in China, some two-thirds are foreign-owned. American corporations exporting Chinese-assembled but U.S.-branded products back to the U.S. — with the majority of profits flowing to the U.S. and other countries (including tax havens) — accounted for over half of the total goods deficit reported by the U.S. government. So far, Beijing is not retaliating formally against China-based American companies, and does not appear inclined to do so soon.

Whatever Beijing intends, generally positive public sentiment toward the U.S. in China is changing to a sense of resignation that a strong commercial and cultural partnership is ending. The Chinese government may be determined to resist U.S. coercion, and Chinese businesspeople have shown themselves in the past to be adaptable in adversity, but there is a growing sense of anxiety about the cost to domestic economic confidence.

The owner of a manufacturing export business in Zhejiang noted: “10% tariffs on our appliances will not make much difference. Our margins are good and we are lowering costs each year through automation. If tariffs increased a lot, we would have to increase our prices, and our customers would pass this onto American consumers. Some of our weaker competitors may eventually go out of business, but there is overcapacity in manufacturing anyway. I worry most about the damage to business confidence here. People are already reluctant to invest and employ new workers.”

An entrepreneur in the automotive sector was more sanguine: “Even if auto-parts companies face higher tariffs, it won’t last. It would take the big American companies years to find alternatives to China. In the meantime, the cost of cars in the U.S. would increase, sales would fall, and U.S. jobs would be lost.”

A Chinese banking analyst in Beijing observed: “There has been so much coverage of the coming trade war that people are no longer shocked. When the tariffs were set at 10%, it was a bit of an anticlimax. Why is America hurting private companies in China, when the ones it condemns the most for unfair practices are state-owned companies? The U.S. should be allying itself with the forces in our economy that it has more in common with.”

To date, the Chinese government has been restrained in the face of the White House’s intemperate threats. It has imposed reciprocal sanctions on imports from the U.S., but has held the currency steady, avoided demonizing America and U.S. companies in the media, and expressed a consistent willingness to negotiate, even as the U.S. has escalated tariffs and its rhetoric.

Less than 20% of China’s exports went to the U.S. in 2017, and since the Chinese economy no longer derives significant value from exports (net exports accounted for 2% of China’s gross domestic product [GDP] in 2017), the direct economic impact of the U.S. tariffs is still limited. UBS has estimated that the currently announced U.S. tariffs could exert a 0.5% drag on real Chinese GDP growth in the next 12 months.

The Chinese government nevertheless faces complex economic challenges. Statistics enumerating Chinese trade flows and foreign exchange reserves do not reflect the critical role the global economy and international institutions such as the World Trade Organization play in China’s growth and stability. China did not rise alone over the last 40 years; it rose in collaboration with its trading partners, particularly the U.S.

As the U.S. isolates itself behind tariff walls and abandons the World Trade Organization (WTO) and other international bodies in the belief that embracing economic nationalism will help it recover some lost idyllic era, China must do the opposite. The principles of “opening-up” and “reform” are as critical in this trade dispute today as when Deng Xiaoping used them to create a private sector in the 1980s. There are some in China who believe that the Chinese economy can function in relative isolation because its economic model is unique. This fallacy is as potentially damaging to the economy as the erosion of business confidence.

When China joined the WTO, it was the world’s 16th-largest economy; now it is the world’s second-largest — and largest by purchasing power parity. The Chinese government can afford to be open more to Western investors and exporters.

Some Western companies mistake the loss of former preferences over local firms for present prejudice, and references to aggressive policies forcing foreign firms to surrender technology to Chinese partners are often apocryphal. Many foreign investors’ concerns in China are, nevertheless, valid. These include the closed nature of the Chinese services sector, Chinese banks’ relative lack of support for foreign enterprises, often more-stringent application of industrial and environmental regulations on foreign companies versus Chinese companies, and a politically influenced commercial legal system.

China lost considerable faith in the Western economic model after the global financial crisis and sought to protect itself from economic contagion. Given the current trade impasse with the U.S., Beijing may consider embracing a more-collaborative approach in international forums, further toning down its economic nationalism, and communicating its progress in allowing foreign firms to compete more freely in the domestic economy. Many in the Chinese leadership know that their country is inextricably bound to the global economy, and for millennia, China flourished when it was open to the world, and was vulnerable when it was closed.

Chinese policymakers are pragmatists and tend to understand long-term strategies well. China must act from strength, but with patience — particularly when its former partner manifests the opposite.