Reflecting Anxieties About the Future, Chinese Sci-Fi Finds Its Feet 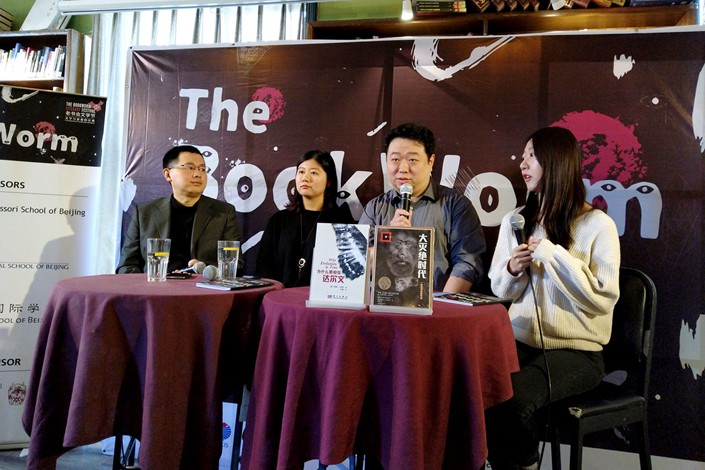 (The Straits Times) — In the 2013 space movie “Gravity,” an astronaut played by Sandra Bullock has only one chance of returning home from low Earth orbit after a catastrophic accident — in a Chinese spacecraft.

Floating past pingpong bats, an ink wash painting and other cultural signifiers, she stares in frustration at a control panel labeled with Chinese characters, exclaiming in Spanish, “No hablo Chino” (I don't speak Mandarin), as a Buddha statue smiles benevolently.

It is only by sheer luck that she makes it back to Earth in one piece.

In the real world, more English readers are today devouring Chinese science fiction despite the language and cultural gaps, as the once-tiny genre has grown in international acclaim and repute.

British readers, for instance, set a new record in sales of translated fiction last year, with Chinese science fiction and fantasy a key contributor to the 20% year-on-year growth, according to Nielsen Book research published last month.

Chinese authors are also doing well in the short story space, a traditional bastion of sci-fi writing. For the second year running, Chinese science fiction edged out Spanish and French ones to be the most translated, said website SF in Translation.

Observers point to Liu's seminal work “The Three-Body Problem” as the beginning of the current wave of global interest in Chinese science fiction. While the 2006 serialized novel generated much domestic buzz and kicked off a trilogy, it was only a 2014 translation into English that brought the new age of Chinese science fiction into the global consciousness.

Liu went on to become the first Asian author to win the Hugo Award, run by the World Science Fiction Society and which is the highest honor for science fiction works alongside the Nebula Award, for which he was also nominated. The Nebula Award is voted on by members of the Science Fiction and Fantasy Writers of America.

Chinese science fiction proved it was no flash in the pan when author Hao Jingfang clinched another Hugo Award — beating fellow nominee and best-selling author Stephen King in the process — for her novelette Folding Beijing, which depicts the Chinese capital divided by social class.

Another watershed moment happened this year, when a movie adaptation of “The Wandering Earth,” a novella by Liu, turned out to be an unstoppable box office juggernaut. Released over the Lunar New Year holiday, the film starred action hero Wu Jing and made over 4.5 billion yuan (S$908 million) to become China's second-highest grossing movie of all time behind 2017's “Wolf Warrior 2,” and its international distribution rights were picked up by Netflix.

That aside, observers said there are two key reasons for the growing popularity of Chinese sci-fi abroad: more readers are looking to understand a rising China, and more nuanced translations by people native or bilingual in both Mandarin and English are now available.

China's growing mastery of cutting-edge technologies, such as artificial intelligence, means its authors are well placed to write about how such technologies might shape human life in the future, author and biologist Gu Di said at a panel on science fiction here last month.

His book, “The Hearts Behind,” delves into the concept of transferable consciousness and putting one's body up for rent as a way to explore the limits of the sharing economy, which, like bike sharing, was pioneered by Chinese companies.

What makes Chinese science fiction unique is that the genre often reflects many Chinese people's anxiety about how technology has shaped and will shape the future, said fellow author Chen Qiufan.

Chen's stories, for instance, include one on how smog — the by-product of China's fast-paced growth — affects a city's denizens on a psychological level, while also being a meditation on the role of non-governmental organisations in Chinese society. Another short story, “The Year Of The Rat,” both presaged China's current trade war with the United States a decade ago and can be seen as criticism of China's education system.

Better translators and more recognition for them by international organizations, such as the Man Booker International Prize, are other factors that contribute to greater readership, said Asia Literary Review managing editor Phillip Kim. “Translating a technical document where you are just trying to get the facts across is one thing; it can be wooden, awkward and clunky, but what really matters is that you are getting the facts across,” he said. “But literature is an art form, it's a language, it needs rhythm, it needs nuance.”

For instance, the first and third books of “The Three-Body Problem” as well as “Folding Beijing” were translated by China-born American author Ken Liu, himself a heavyweight of the genre with Hugo, Nebula and Locus Award wins.

Liu, a proponent of the vibrancy and diversity of Chinese sci-fi writing, has warned against attempts to pigeonhole or define “Chinese science fiction.”

“It is true that there is a long tradition in China of voicing dissent and criticism through the use of literary metaphor. However, this is but one of the purposes for which writers write and for which readers read,” he wrote in the foreword of “Invisible Planets,” one of two anthologies of Chinese science fiction that he has edited.

Instead, like authors everywhere, today’s Chinese writers are concerned with topics such as globalization, technological development and wealth disparities, Liu said.

Chen noted that while the trigger for a Chinese sci-fi story might be a local issue — such as how a town neighboring his childhood home became the electronic waste recycling capital of the world — the issues and themes discussed, ranging from bioengineering to stark inequality, are universal.

“That's what science fiction is made for — to discuss these bigger issues through individual narratives that cut across different languages and cultures,” he said. “It’s not only about Beijing or some small village somewhere in China, but also a metaphor for human beings in general.”

But the genre’s success has come with greater scrutiny and new expectations. Chinese science fiction’s growing popularity abroad means that even the state, which in the 1980s cracked down on its writers under the banner of the anti-spiritual-pollution campaign, has sought to co-opt the genre as a cultural export.

“Chinese science fiction has become so popular that I would go as far as to say that both the Chinese side and the American side are using science fiction as a cultural battlefield,” said translator Emily Jin.

China is definitely trying hard to export culture through science fiction because for many Americans, the only contemporary Chinese literature they know is “The Three-Body Problem,” she said.

On their part, US editors wield a lot more power than their Chinese counterparts and sometimes engage in what Ms Jin calls “counter-censorship” by urging an author to change his writing to fit their own conceptions of China.

She recalled one story where she had to go through 14 drafts with the author before both sides reached a compromise. “It's hard; you have to make compromises. You have to try to struggle your way through to survive, while at the same time being politically sensitive, and to not be led in the wrong direction by people,” she said.

Avid sci-fi reader Milena Lombardi, 28, said she hopes the increased attention on Chinese science fiction will not strangle the genre, which has always been more exciting to read as writers have had more leeway than in other genres that have to be grounded in reality.

“There has been quite a large degree of freedom because until recently not many people had paid attention to it, and also because you can argue, ‘Oh, I'm not talking about the present but a possible reality 100 years from now,’” said the student, who is pursuing a master's at Tsinghua University. “It’s very nice to read because it's writing about Chinese society, but in ways that are very difficult to find in other genres, especially in today's political environment.”