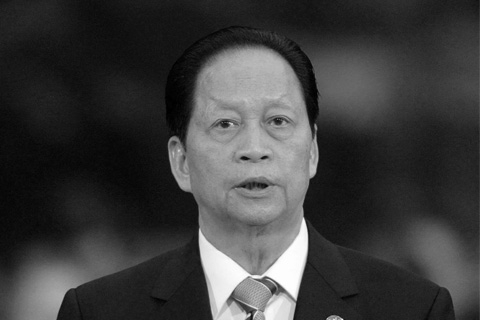 Xiao was praised by state-run Xinhua News Agency as “an excellent member of the Communist Party, a loyal communist fighter and an outstanding leader at China’s political and justice front line.”

In a legal and judiciary career commencing in 1983 when he was 45, Xiao pushed through judicial-system reforms at the provincial and national levels, initiated a movement that led to China’s adoption of rule of law as official policy in 1997 and reclaimed the right of review of capital cases for the Supreme Court, resulting in a dramatic reduction in executions in China.

Xiao was born in August 1938 in Heyuan, a city in the southern Chinese province of Guangdong. After graduating from one of the top Chinese universities, Renmin University of China, with a law degree in 1962, he was assigned to a teaching position at a political leader training school in the western Xinjiang region.

The Xinjiang school was soon closed, and Xiao returned to Guangdong and took various positions in local governments.

At age 45, Xiao was appointed the deputy prosecutor-general of the Guangdong Provincial People’s Procuratorate. Three years later, he was promoted to prosecutor-general of the province, where he initiated a series of reforms in the judiciary system, including the launch of an economic crime reporting center in Shenzhen and the country’s first anti-corruption and bribery work bureau in Guangdong.

Xiao rose to deputy prosecutor-general of the Supreme People’s Procuratorate in 1990 and was appointed Minister of Justice in 1993. Under his leadership, the ministry’s legal counsel department went through a transformation from a state-owned system to a market-based law firm system. As the justice minister, he also promoted the establishment of a legal aid system in China.

Xiao proposed to the central government to hold legal lectures for the top leadership, which ultimately led to the birth of the idea of “governing the country according to the law,” which officially became a new guiding principle of government at the party congress in 1997.

Lawyer Shen Yachuan called Xiao “a real reformer” for promoting a market-based lawyer and notary industry even though doing so could hurt the interests of certain parts of the Ministry of Justice.

In 1998, Xiao was elected the president of the Supreme People’s Court of China, where he led completion of two five-year reform plans, including 89 reforms in the judiciary system. He retired as Supreme Court president in 2007.

One of the key reforms under Xiao’s leadership was the Supreme Court’s takeback of the right of review for death penalties from the provincial-level courts in 2007.

China’s top legislature, the National People’s Congress, had decentralized the review system in the 1980s, allowing provincial and regional high courts to have a final say on cases involving capital punishment, which had led to some speedy but wrongful executions.

The move was part of the “strike hard” anti-crime campaign launched nationwide amid a surge in serious felonies such as murder, rape, armed robberies and arson attacks in the earlier years of the country’s reform and opening-up.

During this period, judges — many of them former police officers or demobilized soldiers without legal training — were often told to expedite trials or to impose harsh punishments, well in excess of those prescribed in the law, for the sake of “maintaining social order.”

Chinese academics estimate the number of death sentences handed down has dropped sharply since 2007 after the Supreme Court took back the right of review.

This reform reduced the number of death sentences by half and even two-thirds in some regions, according to Professor Chen Guangzhong at China University for Political Science and Law in Beijing.

In his various essays on judicial reform, Xiao stressed his belief that the vitality of the judiciary system comes from justice and that the principle of justice is for the people.