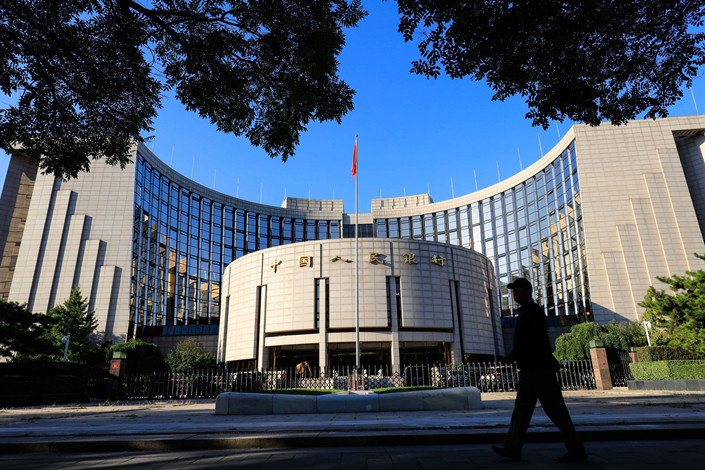 Through a newspaper it runs, the central bank said that it has no plan for a new targeted reserve requirement ratio cut. Photo: IC

The central bank on Wednesday injected cash into the financial system, in what has been seen as a measure to ease short-term liquidity pressure on banks, after it dismissed speculation that it would make a more aggressive move to cut the reserve requirement ratio for some lenders.

The cash injection reinforced analysts’ view that the central bank is now backing away from further loosening monetary policy after the recent release of key economic indicators showed the economy stabilized in the first quarter.

The People’s Bank of China (PBOC) provided 267.4 billion yuan ($39.8 billion) to some large and midsize banks through its targeted medium-term lending facility (TMLF) on Wednesday to reward them for enhancing credit support for small and private companies in the first three months of this year, the central bank said in a statement (link in Chinese).

The PBOC will allow banks to extend the one-year TMLF loans twice, letting them hold the extra cash for three years. It set the rate at 3.15%, 15 basis points lower than the rate for the 200 billion yuan injection that it made last week through the medium-term lending facility (MLF), which does not require banks to lend more to small and private companies.

The TMLF loan was aimed at cushioning a short-term squeeze on banks’ liquidity, analysts said. On Wednesday, banks are due to repay 160 billion yuan from a maturing seven-day reverse repo. The following day, they face a further outflow of funds as they have to lock up a portion of new deposits received in April to meet reserve-ratio requirements. In addition, 367.5 billion yuan from a one-year MLF loan granted in April 2018 came due last week.

The TMLF operation came after the central bank on Tuesday night dismissed rumors that it was going to lower the amount of cash that banks must keep in reserve by 1 percentage point for some rural financial institutions, dampening hopes for further monetary policy easing. Through a newspaper it runs, the PBOC clarified (link in Chinese) that it has no plan for a new targeted reserve requirement ratio (RRR) cut as yet.

“Monetary policy has shifted away from its previous loose stance to a position of maintaining neutral cash injection with a loose bias,” said Ming Ming, a fixed-income strategist with Citic Securities.

By stopping short of imposing another RRR cut and reducing the size of medium-to-long-term cash injections, the central bank intends to “cool the credit market and constrain banks from rushing to lend,” he added.

Sheng Songcheng, a former head of the PBOC’s Financial Survey and Statistics Department, said last week that a further RRR reduction could inflate property and equity prices now that growth in the Chinese economy has stabilized.

China’s gross domestic product (GDP) growth came in at 6.4% in the first quarter, snapping a slowing streak in the past three consecutive quarters, official data released last week showed. It also beat economists’ expectations as market confidence recovered on the back of policy support and progress in Sino-U.S. trade war negotiations.

At a meeting of the 25-member Politburo chaired by President Xi Jinping last Friday, China’s top decision-makers dropped the phrase to “stabilize employment, the financial sector, foreign trade, investment and market expectations” from its post-meeting statement. The phrase had become a fixture in past statements, which analysts interpreted as favoring policy stimulus.

The most recent statement instead emphasized that policymakers aim to “stabilize demand through supply-side structural reform,” adding that monetary policy must be balanced.