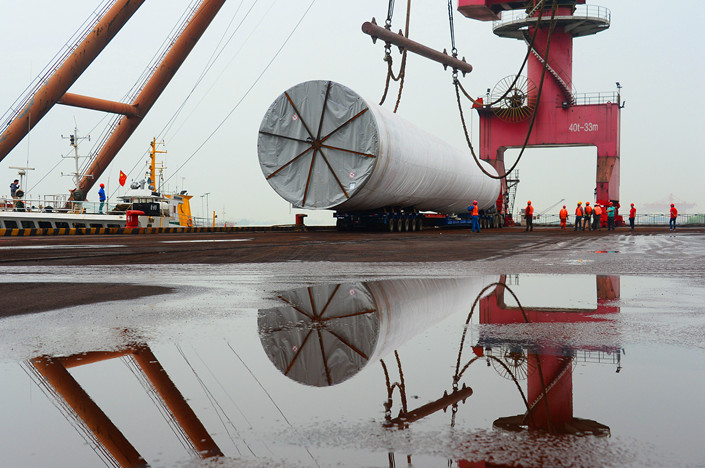 A Chinese manufactured component of an offshore wind turbine gets lifted at a port in the eastern city of Nanjing on Tuesday. Photo: IC Photo

China will push centrally administered state-owned enterprises (SOEs) to pay closer attention to the quality of their Belt and Road projects, a central government official said at a conference.

The State-owned Assets Supervision and Administration Commission (SASAC) under the State Council, China’s cabinet, will ask SOEs directly administered by the central government to improve the quality of their projects under the Belt and Road Initiative, said Xia Qingfeng, director-general of SASAC’s publicity bureau.

SASAC will also ask the SOEs to strengthen cooperation with governments and corporations in countries that have signed up for the initiative, Xia said Wednesday on the sidelines of the Belt and Road Forum for International Cooperation.

The Belt and Road was first proposed by President Xi Jinping in 2013 with the stated goal of developing global transport and trade infrastructure using Chinese expertise and financing.

Xia said that China’s central SOEs are managing more than 3,100 Belt and Road projects. From 2013 to 2018, Chinese companies’ total direct investment in countries involved in the initiative amounted to more than $90 billion, according to a SASAC statement (link in Chinese).

Infrastructure construction has been one of the major focuses of the initiative. Central SOEs have built crude oil and natural gas pipelines in countries like Russia and Myanmar; they have raised power transmission lines in neighboring countries including Russia; and they have completed a railway in Kenya, according to Xia.

China’s central SOEs account for more than 60% of the infrastructure projects under or awaiting construction that Chinese businesses have undertaken in Belt and Road countries, Xia said.

However, concerns have emerged over the debts that countries have had to take on for some Belt and Road projects. Malaysia recently resuscitated a stalled multibillion-dollar railway project with China after managing to reduce the costs by one-third from the initial plan due to the Southeast Asia country’s concerns that the project would saddle it with excessive debt.

A recent report by the Grandview Institution, a government advisory research group in China, has advised domestic companies that invest in overseas ports to strike a better balance between commercial and strategic interests in future Belt and Road projects. So far, port investment has been dominated by China’s state sector, the report found, with central SOEs accounting for 82% of investment.