By Zeng Jia and David Kirton 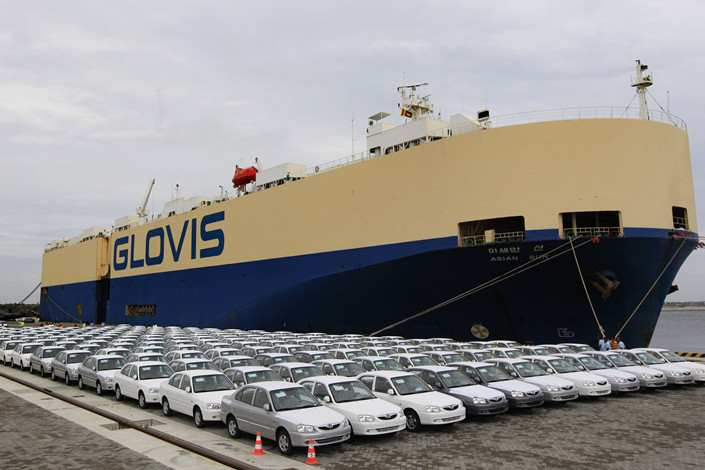 Hyundai cars manufactured in India are parked after being unloaded from the carrier ship Asian Sun at Hambantota Port, Sri Lanka on June 6, 2012. Photo: IC

*A recent report from a research group said that many Belt and Road Initiative port projects have suffered from a “premature mentality,” in which investors jump in without adequate research, and could “stimulate regional political conflicts”

*Chinese firms have invested in 42 ports in 34 countries since 2013 as part of the initiative, the report said

(Beijing) — Chinese companies investing in overseas ports need to do a better job ensuring their projects make money or they risk turning locals against them, a new report said.

The report by the Grandview Institution, a government advisory research group that calls itself independent, advised companies to strike a better balance between commercial and strategic interests in future Belt and Road projects.

Investment in port infrastructure has a priority place in China’s Belt and Road Initiative, with Chinese companies investing in 42 ports across 34 countries since 2013, according to the report. The initiative aims to develop global transport and trade infrastructure using Chinese expertise and financing.

While praising these projects for supporting the development of international trade, the report said that many have suffered from a “premature mentality,” in which investors jump into a project without adequately researching the returns it can realistically expect or the potential for a project to fall into debt. The report also criticized projects for “a lack of information transparency” and “a lack of evaluation on the impact of regional social culture.”

“These problems are not conducive to sustainable commercial profitability, which could stimulate regional political conflicts and unfavorable public opinion, and at the same time trigger some social problems,” the report said.

The report discusses the Hambantota Port, a Chinese-financed and developed project frequently cited by critics as an example of the supposed perils of Belt and Road projects after debts spiraled out of hand, forcing the Sri Lankan government to hand over control of the port to state-owned China Merchants Port Holdings Co. Ltd. on a 99-year lease.

According to the report, the project entered difficulties because, after being conceived in 2012, Sri Lanka’s subsequent “change of government, swinging policies, insufficient management experience, [and] a lack of business and industry” gave passing vessels few good reasons to dock at the port. Problems arose largely because of poor planning and political uncertainty, it adds.

The report praises China Ocean Shipping Group’s role in developing Greece’s Piraeus port into a major transshipment hub and one of the world’s fastest growing ports, which is expected to provide 30,000 more jobs over the next 10 years. Yet it also notes that Chinese companies need to be mindful that workers’ unions such as that at the port are more powerful than many investors realize, and that European countries place a higher premium on the rule of law and transparency.

So far port investment has been dominated by China’s state sector, the report found, with central enterprises accounting for 82% of investment, local state-owned enterprises accounting for 10%, and the private sector just 8%. This is largely because investment has been driven by strategic concerns, rather than sufficient consideration of commercial operations so far, with the deep-pocketed state sector moving to secure valuable port real estate such as in Djibouti. Now that footholds have been established, it is likely that investors’ emphasis will turn to the commercial returns of projects, said Tian Qiubao, one of the report’s lead writers, during a press conference this month.

The report also encouraged Chinese companies to do more to share information about their investments to reduce fears about China’s intentions in these projects. “The information transparency of Chinese enterprises is far from enough in project investment to prevent the international public opinion and local people from having unnecessary imagination about the corruption of the projects. Such an issue exists in many investment cases,” it said.

Transparency issues will likely feature at the second Belt and Road Forum, scheduled to be held in Beijing from Thursday through Saturday.