By Zhang Qi and Isabelle Li 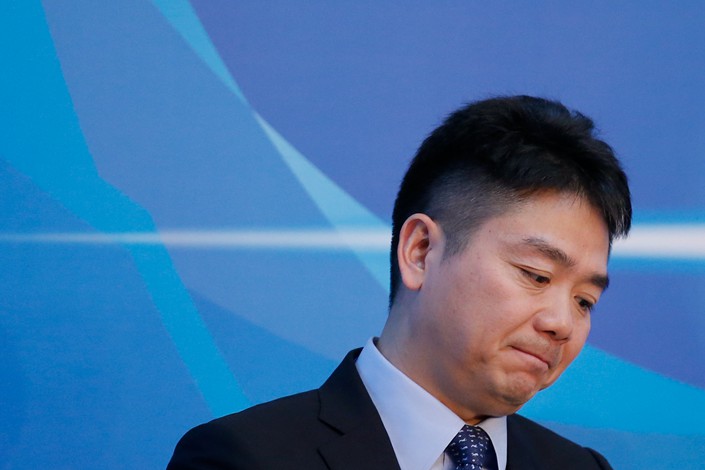 The 22-year-old woman who is suing JD.com CEO Richard Liu said in an interview with Caixin earlier this week that she had never consented to having sex with the tycoon when they met in late August in the U.S.

In an exclusive interview with Caixin, Jingyao Liu said she had barely spoken to the billionaire before the boozy dinner that preceded an encounter during which she said Richard Liu raped her.

Jingyao Liu said she had seen Richard Liu when she was working as a volunteer for Carlson Management School at her university, but they had no direct contact until the networking dinner. During that event, Richard Liu told her that he liked her a lot, and wanted to fly her to New York for a few days before his return to China. The e-commerce tycoon also invited her to join JD.com Inc. as a management trainee after graduation.

Jingyao Liu told Caixin she had also sought help from Richard Liu’s assistant during dinner, telling her in the ladies’ room everything he said that made her nervous and scared, wondering if the assistant could help her leave the dinner properly. But the assistant, named Alice, hinted that she was powerless too — “I’m just an assistant, what can I do?”

According to the lawsuit she filed on April 16 in a Hennepin county court, Jingyao Liu accused Richard Liu of raping her in her apartment after the dinner. After police arrived at the apartment to investigate, Richard Liu tried to intimidate her in an exchange recorded on the officers’ body cameras, leading her “to fear not only for her own safety but also for the safety of her family in China,” she alleged in the lawsuit.

In her interview with Caixin, Jingyao Liu said she was afraid to annoy Richard Liu on the ride back to her apartment after the dinner. She thought he was just sending her home, and did not expect he would refuse to leave after entering her apartment. She said she had tried to convince him to stop the assault by reminding him of his wife and child, but it did not work. Richard Liu ended up staying in her apartment from about 9:30 p.m. on Aug. 30 until around 3 a.m. the next day, she said.

This week, Caixin obtained footage from the body cameras of the police officers who responded to Jingyao Liu’s apartment on Aug. 31. The footage, taken early that morning, shows that after officers escorted Richard Liu from the apartment, one stayed behind to question Jingyao Liu. In the footage, her speech was incoherent and confused, but after repeated questioning, she told the officer that she had sex with Richard Liu voluntarily.

Jingyao Liu told Caixin she initially planned to play down the incident. The tycoon was rich and powerful and she was afraid of retribution, which led her to waver instead of accusing him when the police arrived at her apartment in the early morning of Aug 31. The police officers ended up sending Richard Liu back to his hotel.

When Richard Liu’s assistant contacted her later in the day and asked for her passport information to arrange a trip to New York, Jingyao Liu got angry. Encouraged by her school teachers, she decided to call the police, who arrested Richard Liu. He spent the next 16 hours in jail before being released.

In a statement in December, Richard Liu and his lawyers said everything that occurred that night with the student, whose name was not known publicly at the time, had been consensual. They insisted that student did not refuse Richard Liu or show any sign of reluctance during the sexual encounter. “Everything that happened in the room was voluntary,” the statement said.

In Richard Liu’s statement to police on Sept. 7, which Caixin obtained, the tycoon said Jingyao Liu had told the responding officers that the incident was a huge “misunderstanding.” Richard Liu had returned to China before police completed the investigation and cooperated over the phone, the statement said.

On Monday, security camera footage emerged on the microblogging platform weibo that showed a recognizable Richard Liu accompanying a young woman inside what appears to be a residential building. The video, which was posted on an account opened in January, showed the two walking to the door of a room and entering together.

In her interview with Caixin, Jingyao Liu acknowledged that the video was authentic, but said it had been edited to create false impressions. She said the same about an anonymously supplied audio clip that sounds as if it could be her talking with Richard Liu’s lawyer. The audio clip surfaced on a domestic newspaper’s website on Tuesday.

The clips stirred up speculation online, with many suggesting that she sought to trap Richard Liu. Jingyao Liu denied those accusations.

In December, Minnesota prosecutors announced that they had decided not to press felony rape charges against Richard Liu because of insufficient evidence, concluding a three-month investigation. Prosecutors said they had concerns about proving the case “beyond a reasonable doubt.”

Richard Liu, JD.com, and their attorneys previously denied any wrongdoing.

JD.com referred requests for comment to their lawyer who did not respond to Caixin by the time of publication on Friday.