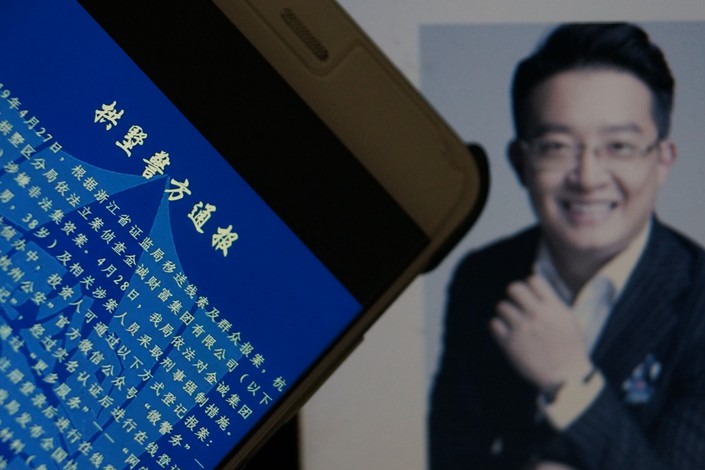 JC Group and its affiliates raised as much as $4.5 billion from investors as of last May. Photo: IC Photo

* The 38-year-old controller of the company, identified only by his surname Wei, was put under “criminal coercive measures” on Sunday

(Beijing) — The head of a private fund company in billions of yuan of debt is under police investigation for illegal fundraising, in the latest scandal to hit China’s fraud-prone private investment industry.

A probe was launched Saturday into suspected illegal fundraising by JC Group, which is based in Zhejiang province’s capital of Hangzhou, after police received reports from the eastern province’s securities watchdog and whistleblowers, Hangzhou police said in a social media post.

The 38-year-old controller of the company, who was only identified by his surname Wei, was put under “criminal coercive measures” on Sunday along with an unidentified number of other “relevant people involved in the case,” the police statement said. Under Chinese law, criminal coercive measures may include summons by force, bail, residential surveillance, detention and arrest.

An investor in the company, who declined to be named, told Caixin that company controller referred to in the police statement is Jay Wei, founder and chairman of JC Group.

JC Group and its affiliates control at least six private fund management firms and one fund sales company. The six management firms had a total of 128 products in operation by the end of March, according to figures provided by the Asset Management Association of China (AMAC), an industry self-regulatory body overseen by the country’s securities watchdog.

The company and its affiliates raised as much as 30 billion yuan ($4.5 billion) from investors by last May, according to a report on the initial findings of a securities watchdog investigation seen by Caixin. The report showed that by October they had missed repayment on more than 17 billion yuan.

JC Group and its affiliates claimed most of the funds were invested in private-public partnership projects that included the development of tourist towns and low-income housing. However, a lot of the money was actually used to pay interest on short-term fixed-income products sold by the companies or to refinance their borrowing, some investors interviewed by Caixin said. Some was even funneled into real estate by Wei and other senior managers of JC Group, investors said.

Several JC Group customers said that more than 3,000 investors have bought funds managed by the company and its subsidiaries.

Signs that JC Group was facing a crisis emerged in the second quarter of last year, when Zhejiang’s securities watchdog punished some fund companies linked to it for refusing to cooperate with the authorities in on-site inspections and exaggeration in marketing activities. The regulator ordered JC Group’s fund sales company to suspend its business for six months.

JC Group later started to bar investors from redeeming some fund products and asked customers to sign an agreement to allow the company to extend the repayment period, a September statement (link in Chinese) from the company showed.

China’s private fund industry has been rattled by multiple scandals in recent years. In one of the most notorious cases revealed last year, Shanghai-based private equity firm Fuxing Group was found to have bilked investors out of billions of dollars.

In October, the industry’s assets under management dipped for the first time since the AMAC began publishing figures about the size of the sector in January 2015. From the first figure in early 2015 to the industry’s peak in August, the sector’s assets under management went from 2.11 trillion yuan to 12.8 trillion yuan due to a lack of regulation and bold investment tactics.

The private fund sector’s assets under investment totaled 12.78 trillion yuan (link in Chinese) at the end of last year, up 15.1% from the year before. The growth was the weakest since AMAC data became available and compared with 2017’s rate of 40.7%.