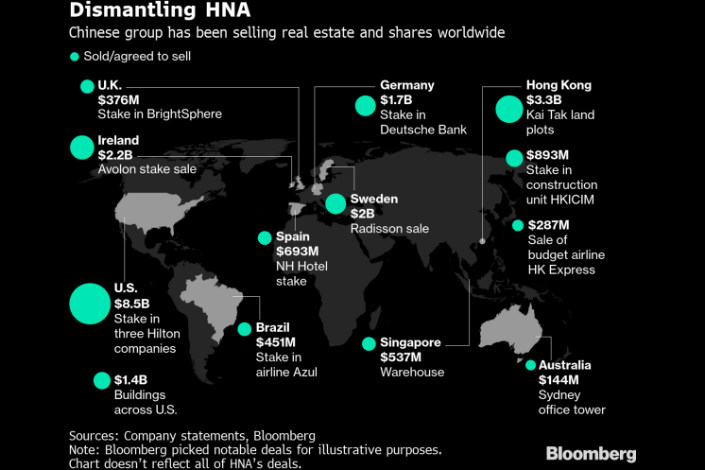 (Bloomberg) — Even for a company that’s been through as many crises as HNA Group Co., it’s been a rough few months.

In April, creditors of the embattled Chinese conglomerate took the extraordinary step of seizing golf courses and other assets after a unit missed a loan payment. The group’s also been embroiled in an increasingly bizarre power struggle over control of Hong Kong Airlines, while people familiar with the matter say HNA shelved the sale of a container-leasing business after failing to find anyone willing to pay the $1 billion-plus price it was seeking.

For HNA, the setbacks underscore how the group is still struggling to deal with the fallout of a global acquisition spree that pushed it deep into debt. Despite agreeing to sell more than $25 billion in assets since the beginning of 2018, HNA’s travails more broadly show how China’s two-year deleveraging campaign continues to rock some of its biggest targets, many of which emerged during a period when the government was encouraging private enterprises to seek out overseas assets.

"The situation is dire,” said Brock Silvers, managing director of Kaiyuan Capital, a multi asset advisory and investment firm focused on China. The missed loan payment by CWT International Ltd., a Hong Kong-listed investment holding company HNA controls, “reveals the depth of HNA’s current predicament. At this point there are no safe harbors for HNA investors.”

Like many of China’s once high-flying conglomerates, including Waldorf Astoria-owner Anbang Insurance Group Co. and the ever-shrinking Hollywood giant Dalian Wanda Group Co., HNA has been selling off assets after the government scrutinized their debt-fueled expansions and the financial risks tied to them. None have faced harsher punishment from Beijing than Anbang: its founder was jailed and the government has temporarily seized the business.

For its part, HNA — which started out as an airline — said it’s made substantial progress bringing its focus back to its roots, cutting debt and strengthening its balance sheet in the past year. “As the company looks ahead, it will continue to take a thoughtful and disciplined approach to realigning its portfolio and rebalancing its strategy to optimize performance over the long-term,” HNA said in a statement to Bloomberg.

There’s no doubt the asset sales have helped reduce HNA’s debt. But it may not be enough. Based on the group’s latest available financials — the six months ended June 31 — HNA still held about $80 billion of debt. Of that amount, $25 billion was due within a year, or more than what the company held in cash, equivalents and short-term investments combined. The company’s profits couldn’t even cover its interest payments.

“While the company seeks further liquidity, it may become increasingly selective in honoring obligations,” said Silvers, who is based in Shanghai. “It’s possible that HNA might not survive 2019’s planned debt obligations in its current form.”

The company has sold or agreed to dispose of more than 40 assets since 2018, according to a Bloomberg tally. And, there’s likely more to come.

Bloomberg reported in November that HNA was marketing more than $40 billion of its domestic and international holdings, including more than 90 assets in China, the U.S. and U.K. Among the priciest assets on the list were the 245 Park Ave. skyscraper it bought for a near-record $2.21 billion, the yin-yang-shaped Pearl Island in Hainan and Shanghai’s HNA Plaza.

Compounding HNA’s problems is that the company likely overpaid for many acquisitions, said Ronald Wan, chief executive at Partners Capital International Ltd. “Even if they sell all assets, they could still be in deficit,” he said. “It’s unrealistic and impossible to sell them at a profit.”

HNA is also facing unusual disputes. Zhong Guosong, a former director of HNA-backed Hong Kong Airlines, has said he has taken control of the carrier, proclaimed himself chairman and accused HNA of various acts of malfeasance — accusations that HNA has denied. Hong Kong Airlines has said it doesn’t recognize Zhong’s chairmanship but acknowledged that the dispute has seriously disrupted order at their offices. Flights were operating normally, it said. Complicating matters, Zhong is chairman at Hong Kong Express, the carrier that HNA has agreed to sell to Cathay Pacific.

Trouble has also brewed in HNA’s flagship unit. On March 15, Hainan Airlines Holding Co. said a Chinese court froze shareholdings in the company as a result of a contract dispute with a local aircraft leasing firm. Additionally, HNA has been behind on its aircraft lease payment. The carrier last month revised its 2018 net loss forecast to as much as 4 billion yuan ($594 million) from an earlier forecast of as much as 500 million yuan, due to asset impairment and fewer subsidies.

“HNA has clearly lost the battle to maintain its existence as a separate company,” he said. It’s “being taken apart piecemeal.”