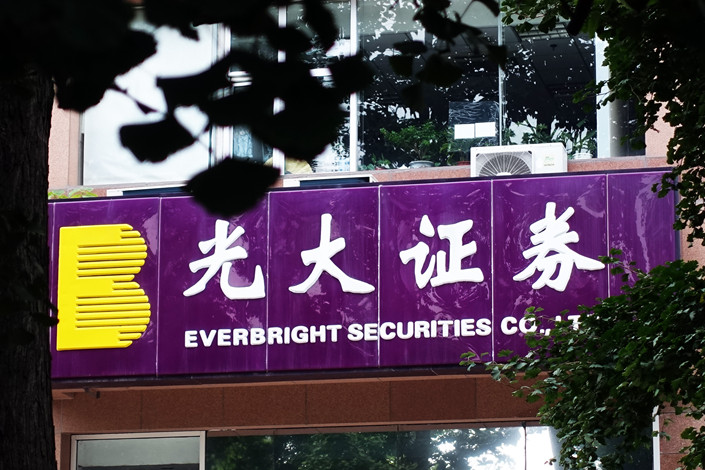 * Xue’s downfall has its roots in a deal to purchase a 65% stake in London-based sports rights distributor MP & Silva for 5.2 billion yuan in 2016

* In October, MP & Silva was declared bankrupt and liquidated after it lost key contracts and its main dealmakers left for rival companies

(Beijing) — The chairman of Everbright Securities Co. Ltd. has resigned after a derailed European media deal likely to saddle the company with huge losses cast a spotlight on the state-owned brokerage’s lax risk controls.

Xue Feng, 51, resigned as chairman and executive director of Everbright Securities on Sunday due to “work arrangements,” the company said in a filing with the Hong Kong stock exchange late Monday. He will be succeeded by 48-year-old Yan Jun pending regulatory approval, the statement said. Yan replaced Xue as Everbright Securities’ Communist Party chief, one of the other top roles at big state-owned companies, several months ago.

Xue’s role at the brokerage began fading long before the latest resignation. His downfall has its roots in his company’s participation, through a subsidiary, in the purchase of a 65% stake in London-based sports rights distributor MP & Silva Holding SA (MPS) for 5.2 billion yuan ($771.4 million) in 2016.

In October, MPS was declared bankrupt and liquidated after it lost key contracts and its main dealmakers left for rival companies. That and suspicious deal-making in the acquisition led two investing partners to seek 3.5 billion yuan from the brokerage in February as compensation for failure to recoup their investments with promised returns.

While the brokerage only entered the deal with a minority investment of 60 million yuan, it has had to take 1.52 billion yuan in provisions for contingent liabilities and impairment losses, according to its 2018 report published in late March. As a result, the company’s net profit plummeted nearly 97% to 103 million yuan last year.

In March, the Shanghai bureau of the China Securities Regulatory Commission sharply criticized the company for its (link in Chinese) “poor management and control of subsidiaries,” “flawed internal control,” and failure to “strictly follow the internal decision-making procedures on major incidents.” The regulator pointed out that Xue was responsible for those problems, and summoned him to give him a reprimand.

A source close to the brokerage told Caixin that Xue would help manage the MPS cleanup as needed even after his resignation.

David Kirton contributed to this article.