By Zhang Erchi and Wu Gang 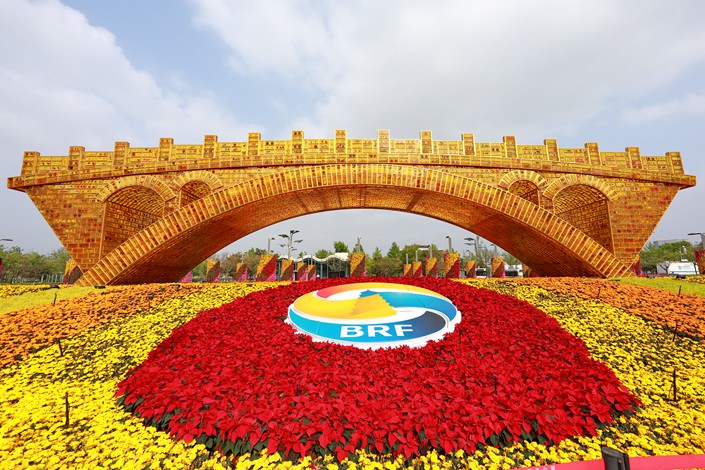 The Belt and Road "cultural bridge" is seen outside the media center for the Second Belt and Road Forum (BRF) for International Cooperation in Beijing on April 23, 2019. Photo: IC Photo

The second Belt and Road Forum concluded in Beijing over the weekend, with China announcing that it has reached nearly 300 deals and agreements with dozens of countries.

The three-day summit’s bigger theme, which caught worldwide attention, is the strategic shift in this mammoth program initiated by President Xi Jinping in 2013.

As Xi noted in his speech opening the forum on Friday, the basic framework has taken shape and it’s now time to focus on key projects and improve the quality of each project.

At the August commemoration of the fifth anniversary of the Belt and Road Initiative, Xi indicated China’s desire to change course from “freehand brushwork” to “meticulous painting,” or go from rough outlines to working on the details.

The initiative, which aims to enhance China’s trade connections, is entering its second phase. What does it mean for the initiative’s projects, most of which involve infrastructure, being undertaken by Chinese state-owned companies all over the globe?

Xia Qingfeng, an official with the State-owned Assets Supervision and Administration Commission (SASAC), the government body that oversees the largest state-owned companies, said on April 24 that the companies in future will focus more on key projects and channels, lower the proportion of infrastructure projects “appropriately,” and gradually enhance industrial cooperation with local countries.

“China’s experience of development has always been to start with infrastructure, which will be followed by development moves in other aspects that creates a sustainable cycle,” Xu Haoliang, UN assistant secretary-general and the UN Development Programme’s Asia Pacific chief, told Caixin. “A lot of infrastructure projects have been built in the first six years of the Belt and Road Initiative, the logic behind this is (the Chinese saying) ‘if you want to get rich, build a road first.’”

It is true that many roads and ports have been built, including the 480-kilometer (298 miles) Mombasa-Nairobi railway in Kenya; the 750-kilometer railway Addis Ababa-Djibouti that gives Ethiopia a link to the sea; and Hambantota port in Sri Lanka. If China just leaves these projects behind and only waits for the return of the money these countries have borrowed, the local economies may not do well enough to sustain such epic projects — the case of Tanzania-Zambia railway that was built in the 1970s but is now on the brink of a breakdown because of poor management and lack of maintenance, could be repeated.

It’s widely agreed among Belt and Road participants that the focus of the next step will be industrial cooperation, in which Chinese investment will help partner countries develop sustainable businesses, make money, and create jobs to benefit local people.

Qian Keming, vice minister of commerce, said at a forum on overseas economic cooperation on April 25 that there are already more than 30 countries which have told the Chinese government that they would like to learn from China’s experience and build economic and trade zones to grow their economies.

Pakistan, for example, said at the Belt and Road forum on April 26 that its flagship cooperation project with China, the China-Pakistan Economic Corridor, will step up from the building of ports and airports to poverty alleviation and business development.

China’s Shenzhen Special Economic Zone, which after its creation in 1980 helped spearhead four decades of China’s economic reform and opening-up, is an example that many countries would like to replicate. Especially at a time when a country lacks resources, a special economic zone can lead to industrial facilities being built first and also offer preferential policies to attract investment. Then the concentration of industrial supply chains will trigger the development of nearby areas.

Chinese companies had helped build more than 100 economic and trade cooperation zones in other countries by the end of 2018, investing more than $40 billion. These projects have generated more than $3 billion in tax revenue to local governments, and created more than 300,000 jobs, according to Ministry of Commerce data.

However, since the first such zones were built over a decade ago, only 45% of these overseas economic cooperation zones have started to turn a profit, and it will be a long time before many other projects will see a return on investment, according to a Ministry of Commerce survey released on April 25.

Following the first stage of Belt and Road cooperation, foreign governments and business circles now have higher expectations of China’s overseas projects. During the Belt and Road forum, many said they hoped Chinese projects could be more open and more environmentally friendly, so as to be better prepared for political risks in host countries.

The Chinese side has responded positively. Xiao Yaqing, head of SASAC, said on April 25 that the government will encourage state-owned companies to seek complementary cooperation with local companies in the Belt and Road countries. The two sides can establish joint ventures or industrial alliances based on market principles in order to seek deeper and wider cooperation, Xiao said.

“We cannot only seek cooperation in each other’s markets, we can also jointly explore third-party markets, including those outside the Belt and Road routes,” Xiao said. He emphasized that the Chinese government has requested state-owned companies hire as many local employees as possible, and provide them with professional training.

The Chinese central bank’s Governor Yi Gang also said China will thoroughly assess the capability of each country to handle debt from projects. “We will strengthen the debt and risk control to ensure sustainable development,” he said.

China has so far provided a total of more than $440 billion for Belt and Road projects, according to Yi.