After Fatal Explosion, Jiangsu Chemical Firms Ordered to Relocate Away From People 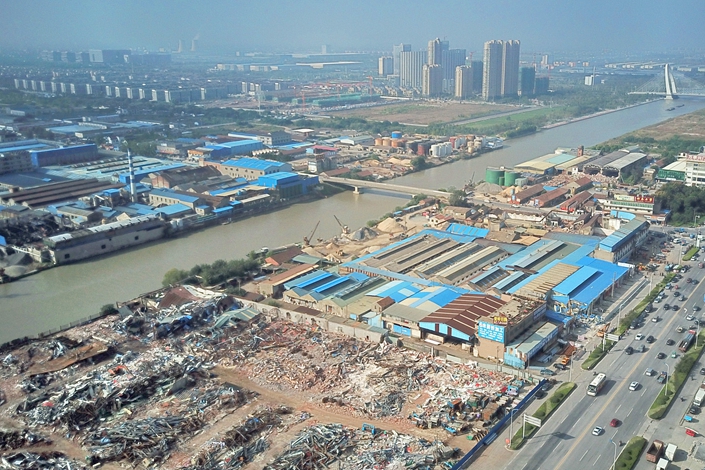 Authorities in the eastern province of Jiangsu are telling chemical firms to move away from population centers or shut up shop, as they respond to the deadly explosion that killed 78 and injured hundreds more in March.

The blast at the Jiangsu Tianjiayi Chemicals fertilizer and pesticide plant in Xiangshui county left a 100 meter-wide (328 feet) crater and released hazardous chemicals into the air and water nearby. The cause appears to have been the improper storage of inflammable hazardous waste. Inspectors flagged safety risks at the plant in a visit a year earlier.

But this time the provincial government has told the region’s chemical companies to clean up their act for good. “In order to learn lessons from the ‘3.21’ major incident at the Xiangshui Chemical Park and to establish ‘safety-first,’ people-centered development … the provincial government will enact a new plan immediately” it said in a notice (link in Chinese) this week.

According to the plan, the government will speed up the relocation of smaller chemical companies away from densely populated urban areas, and those that stay open will have to beef up security standards or close their doors by 2020. Chemical plants located within a kilometer (0.6 miles) of the Yangtze River will also have to relocate or close by the same date.

As of mid-April, police had detained at least 26 people in relation to safety lapses at the Xiangshui site. Most were employees of Tianjiayi Chemicals. Yet locals have long complained about lax safety standards among the smaller chemical plants that thrived in the north of the province in the early 2010s thanks to local government encouragement. A blast at the same park killed eight people in 2008, and a chlorine leak harmed dozens three years later.

Chemical products contribute around a tenth of Jiangsu's business revenues, according to HKTDC Research.

Chemical blasts caused by lax storage standards have been a frequent issue in China in recent years. In November, a blast caused by a vinyl chloride leak at a chemical plant in North China’s Hebei province killed 24 and injured 21. At least 165 people died when chemicals in a shipping container exploded at the port of Tianjin in April 2015.

The government is currently supporting the development of a more advanced petrochemicals industry as part of a wider effort to upgrade China’s manufacturing sector. However, these are mostly being built on a larger scale and face tougher environmental standards.