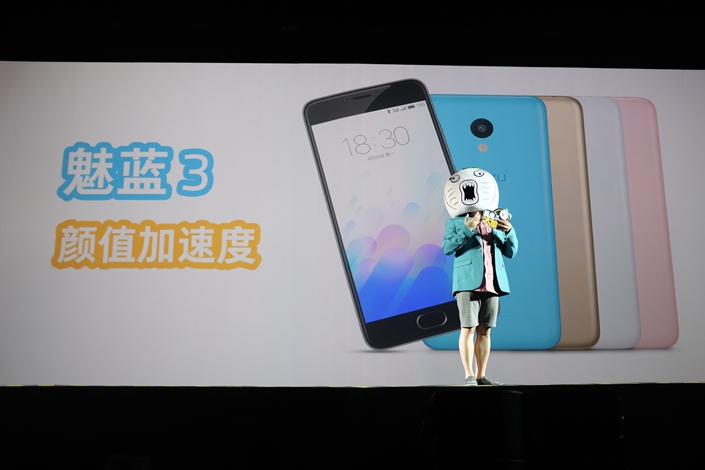 Meizu holds a launch event for a new smartphone model in April 2016, one of three it held that month. The rapid increase of the company’s smartphone line that year was a major factor behind its current troubles. Photo: VCG

A fund backed by three state-owned entities has provided new money to Alibaba-backed smartphone maker Meizu Technology Co. Ltd., throwing the former highflyer a lifeline as it struggles with plunging sales in an oversupplied global market.

China has become home to some of the world’s top smartphone-makers, led by the likes of Huawei and Oppo, as companies rushed to enter a market where maturing technology lowered barriers to entry. But that rush has led to a glut, especially at the lower end of the market. Broader market saturation has caused sales to decline globally, putting pressure on second-tier players like Meizu.

On April 29, the company sold 2.09% of itself to Honghua, a fund set up just a month earlier by a trio of state-owned investment entities in Meizu’s hometown of Zhuhai, across the border from Macau, according to a disclosure on a local Zhuhai commercial website. No amount was given for the investment, which marked the first major one for Meizu since October 2016.

In addition to the stake, the Honghua fund will get one spot on Meizu’s seven-member board, according to the company’s amended charter after the investment. Following that investment, Meizu’s founder Huang Xiuzhang is the company’s largest shareholder with a 49% stake, while Alibaba is No. 2 with about a 27% stake.

Founded in 2003 as an MP3 music player maker, Meizu was one of the earlier firms to join the smartphone craze, entering the field in 2007 and rolling out its first model two years later. It quickly became a major player, and made headlines during its A-funding round in 2015 when Alibaba invested $590 million. It followed with a second round a year later that included leading Taiwan telecom chipmaker MediaTek, valuing Meizu at 30.5 billion yuan ($4.4 billion) at that time.

Honghua was the only participant in the latest investment round, reflecting how much the sector has cooled lately in the eyes of investors.

At its height, Meizu was one of China’s top smartphone-makers. It earned 16.8 billion yuan in revenue on shipments of 20 million smartphones in 2015, making it the sixth biggest of domestic Chinese manufacturers. The figure rose to 22 million units in 2016, a year when Meizu became profitable.

Around the time of its two major fund-raisings, Meizu began significantly boosting its smartphone product line — a strategic decision that would come back to hurt it as the addition of numerous new models caused inventories to build, said smartphone analyst Sun Yanbiao. As that happened and it started to feel a cash crunch, it began laying off workers and closing shops around 2017.

Last year, the company only sold about 5.5 million smartphones worldwide — down 74% from the previous year, according to data tracking firm IDC. Its sales fell an even sharper 79% in China, its most important market, though it was still the sixth-largest player there, IDC said.

Meizu’s struggles come as other second-tier smartphone-makers also face similar challenges due to consolidation of the market around top players. The latest IDC data showed that the world’s six top brands — Samsung, Huawei, Apple, Xiaomi, Oppo and Vivo — accounted for more than three-quarters of the global market in this year’s first quarter, leaving the rest to smaller players like Meizu. Another similar-sized player, Gionee Communication Equipment Co. Ltd. has already gone bankrupt and is currently in the process of liquidation.