Opinion: China Should Stay Steady on the Yuan 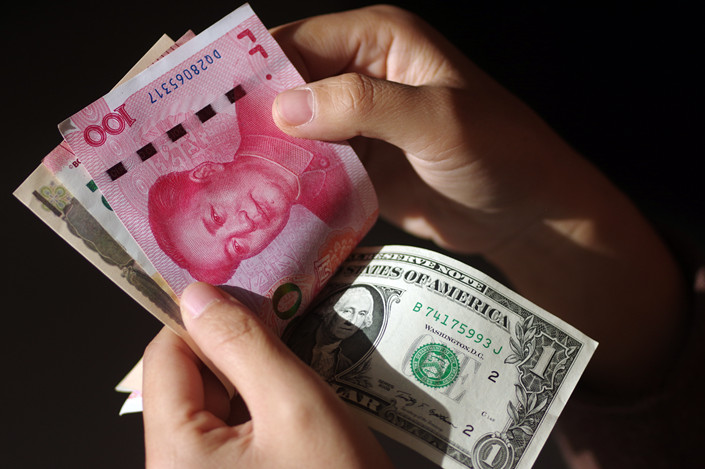 If the yuan weakens too much, it will do a lot of damage to market confidence, increase capital outflow pressure, and even give the U.S. government a chance to question China in future negotiations. Photo: VCG

Trade war uncertainty has intensified as the U.S. has raised additional tariffs on Chinese goods, putting more pressure on the yuan’s exchange rate. Now China has to worry about excessive yuan depreciation. It’s not in China’s interest and would do more harm than good to the country for the yuan to depreciate beyond 7 to the U.S. dollar.

If yuan weakens beyond this key point, it will do a lot of damage to market confidence, increase capital outflow pressure, and even give the U.S. government a chance to question China in future economic and trade negotiations. Yet yuan depreciation has only a limited effect on improving China’s foreign trade. It’s far more effective for China to improve trade by enhancing the competitiveness of its products than by obtaining a price advantage by devaluing the yuan.

Drawing lessons from Japan, China should avoid financial frictions with the U.S. because they are difficult to reverse. It should neither guide the yuan into depreciation nor allow a sharp appreciation. China should treat current yuan depreciation, which is a normal market reaction to the latest U.S. tariff hikes, in a rational, prudent manner.

China’s economy has gradually stabilized, a trend that won’t be easily changed by the U.S. tariff hikes, so there’s no economic foundation for yuan devaluation.

The U.S. has increased additional tariffs on $200 billion of Chinese goods to 25% from the previous 10%. According to market estimates based on its static impact on China’s export sector, the U.S. move will drag down China’s gross domestic product (GDP) growth by 0.2 to 0.65 percentage points. But if each side imposed an additional 25% tariff on all its imports from the other, China’s GDP growth would fall by 0.5 to 1.5 percentage points, the International Monetary Fund said in its World Economic Outlook report.

However, if one takes a more multifaceted view of the situation, the actual impact of U.S. tariff measures may be smaller than expected because of subsequent adjustments in the total value and structure of bilateral trade, transfers of the tariff effects among goods, as well as changes in the yuan’s exchange rate. Market participants always seek ways to reduce transaction costs, which helps hedge the effects of additional U.S. tariffs.

In the trade sector, export destinations for Chinese products have become increasingly diverse. At the same time, China’s trade in services has continuously grown. In the first four months of this year, the U.S. accounted for 11.5%, 5.9% and 16.4% of the value of China’s total foreign trade, imports and exports, respectively. Those figures are down 2.2, 1.3 and 2.8 percentage points, respectively, from the whole of 2018. In contrast, the EU and ASEAN countries accounted for 15.7% and 13.4% of China’s total trade value in the same period, respectively, up 0.9 and 0.6 percentage points from last year. Countries along the Belt and Road accounted for 28.7% of China’s total trade value in the January-to-April period, up 1.3 percentage points year-on-year. In the first quarter of this year, China’s trade deficit in services fell 14.3% year-on-year, with service exports jumping 10.3%.

Meanwhile, China has made continuous progress on adjusting its economic structure, with domestic demand becoming a main driver of growth and exports contributing little. Last year, China’s trade surplus narrowed to $351.8 billion from $422.5 billion in 2017, with net exports making a contribution of -8.6% to GDP growth. By comparison, final consumer spending contributed 76.2% to GDP growth in 2018, up 32 percentage points from 10 years ago.

Depreciation does no good to opening-up

Currency depreciation usually causes a lot of problems that outweigh any gains. Maintaining the basic stability of the yuan’s exchange rate at a reasonable and balanced level is conducive not only to international macroeconomic policy coordination, but also to generating positive spillover effects and promoting mutually beneficial cooperation between China and other major economies, as well as its trading partners.

Currently, foreign investment in China has grown steadily and its structure has gradually grown more optimized. The basic stability of the yuan is the fundamental condition for maintaining this momentum. In the first four months of this year, more than 13,000 foreign-invested enterprises were established nationwide, and China’s actual use of overseas capital (excluding investments in banks and securities and insurance firms) rose 6.4% year-on-year to 30.5 billion yuan ($4.4 billion). In the same period, the actual use of foreign capital in high-tech manufacturing and service industries reached 33.4 billion and 52.5 billion yuan, respectively, up 12.3% and 73.4% year-on-year. That shows international investors have confidence in China’s future development.

Capital flows have had an increasing impact on the yuan’s exchange rate in recent years. Market expectations have become a crucial factor affecting the yuan. From a market transaction perspective, if the yuan weakens beyond the key threshold (of 7 to the U.S. dollar), it would trigger a large number of stop-loss transactions. What’s more, an official devaluation of the yuan would cause market participants who had been sitting to the fence to start shorting the currency. All of these factors would lead to excessive yuan depreciation. Once the key psychological threshold is broken, it would trigger readjustments in market expectations and further dampen market valuations for the yuan. Given the self-reinforcing characteristics of expectations, China cannot ignore the key threshold’s impact on market expectations.

Currently, the U.S. hasn’t labeled China as a currency manipulator and doesn’t want to see a sharp depreciation of the yuan. China needs to keep the yuan more or less stable at a reasonable level and let the market reasonably allocate resources on an objective and rational basis.

Sheng Songcheng, a former head of the Financial Survey and Statistics Department at the People’s Bank of China, is executive deputy director of the Shanghai-based CEIBS Lujiazui Institute of International Finance.

This story has been updated to correct how much the proportion of China’s total imports and exports accounted for by the U.S over the first four months of 2019 had fallen from the whole of 2018.