Sofa-Maker Moving Production for U.S. Market Out of China

By Cao Yanjun and Timmy Shen 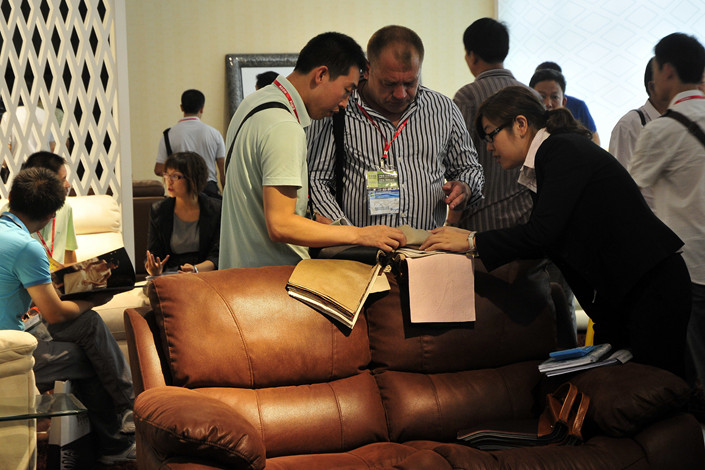 Hong Kong-listed Man Wah Holdings Ltd., one of China’s largest recliner sofa suppliers, plans to transfer production to Vietnam from the Chinese mainland, in a bid to cushion the impact of the Sino-U.S. trade war.

The trade war between China and the U.S. has increased uncertainties in both markets. To allay the impact, Man Wah acquired a factory in Vietnam in June. Construction of the facility is expected to wrap up in the fourth quarter of this year.

The company bought the factory because it plans to transfer production of all of its products bound for the U.S. from the Chinese mainland to Vietnam, said William Guy Ray, president of Man Wah USA Inc., on Tuesday at a briefing for the release of its annual earnings report.

Man Wah currently has production facilities in several Chinese cities, including Chongqing, Tianjin and Huizhou in the southern province of Guangdong.

Chairman Wong Man Li said at the briefing that the Vietnam factory may put more pressure on the company in the short term, but it will pay off in the long-run. The factory’s roughly $300 million price tag is well above Man Wah’s annual profit of HK$1.4 billion ($178 million) in its latest fiscal year, which ended on March 31.

On May 10, the U.S. raised additional tariffs on $200 billion worth of Chinese goods, including some textile-made furniture, from 10% to 25%.

Man Wah is not the only company moving production from the mainland to Vietnam. Several multinationals have begun moving their production chains to the Southeast Asian country, in part due to the trade war, as it becomes more integrated into the global economy and trade system.

Headquartered in Hong Kong, Man Wah primarily sells sofa and ancillary products in China and North America. In the latest fiscal year, it reported revenues of HK$5.5 billion and HK$4.1 billion in the two markets, respectively, according to its earnings report. The figures represented 48.8% and 36.8% of its HK$11.26 billion in total revenue.

Despite uncertainties from the trade war, the sofa supplier’s North America revenue increased by 15.5% year-on-year in the fiscal year of 2019, outpacing revenue growth in other markets, the report showed.

Man Wah paid HK$99.5 million in customs duty on goods exported to the U.S., according to the earnings report. That figure amounted to less than 1% of the company’s total revenue.

It didn’t disclose the duty figure in its previous annual report.

This story has been updated to correct the date in May that the U.S. raised additional tariffs on Chinese goods. It was May 10.