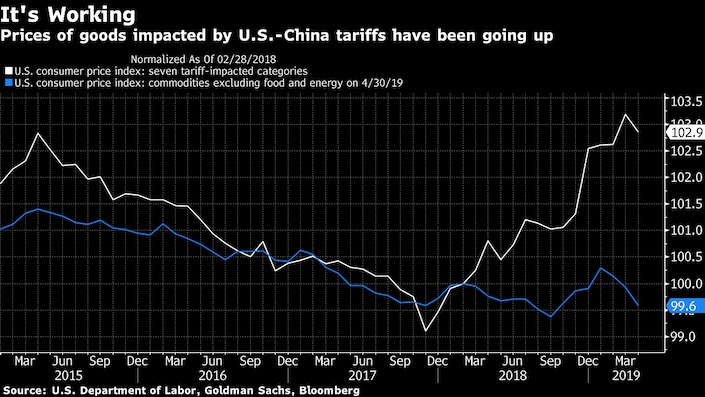 Companies in the U.S. are paying almost all the costs from President Donald Trump’s tariffs on Chinese imports, International Monetary Fund researchers said in findings that dispute the president’s assertions that China is footing the bill.

IMF researchers found that “tariff revenue collected has been borne almost entirely by U.S. importers,” according to an IMF blog post Thursday.

“Some of these tariffs have been passed on to U.S. consumers, like those on washing machines, while others have been absorbed by importing firms through lower profit margins,” the IMF said.

The report concludes what most private economists have argued for months: that China doesn’t pay U.S. tariffs, American consumers and companies do. “Consumers in the U.S. and China are unequivocally the losers from trade tensions,” the IMF said.

Co-written by IMF Chief Economist Gita Gopinath, the paper says a trade war that escalates with all the threatened tariffs will subtract about a third of a percentage point of from global gross domestic product, “with half stemming from business and market confidence effects.”

The fund in April cut its 2019 forecast for global growth to 3.3%, the lowest since the financial crisis, citing higher tariffs weighing on trade and weakness in some advanced economies.