In Depth: Domestic Medical-Device Startups Struggling To Cut Through 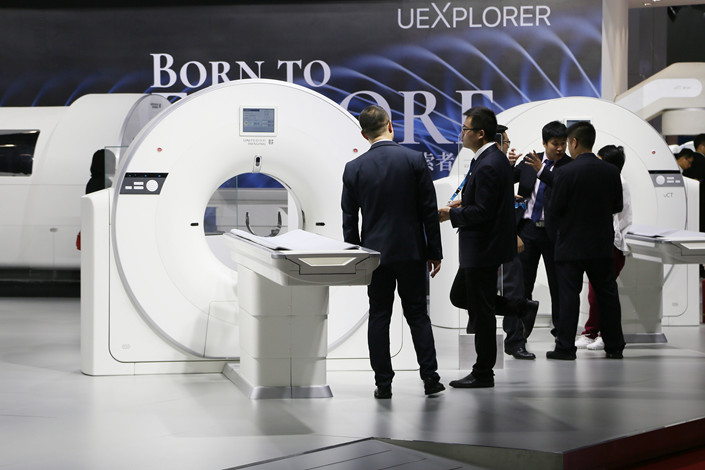 Domestic startups angling for a piece of China’s high-end medical-device market are struggling to break through in a field dominated by international brands.

Medical device entrepreneurs — who include scientist-inventors seeking to commercialize their research — have told Caixin there’s limited enthusiasm for the kind of long-term investment required in an industry where genuine breakthroughs are hard-won.

Cheaper “copycats” of foreign technology are more attractive to investors, even as questions linger over their popularity among Chinese consumers who may be unwilling to stake their life on a low-cost local brand.

The Chinese government has ambitious aims for the sector. The controversial “Made in China 2025” plan, which promotes self-reliance to break the nation’s dependence on imported technology, aims to increase the domestically produced share of sophisticated medical devices such as pacemakers and implants in Chinese hospitals to 50% by 2020, and to 70% by 2025.

As it stands, the market is valued at around 183 billion yuan ($26.5 billion) by analysts at Fitch Solutions, who project it will grow to 267 billion yuan by 2023. Government support, together with an aging population in need, has spurred its growth alongside rapid demand for other healthcare segments.

Medical devices span everything from low-tech single-use tools — like the wooden sticks used to push down on a patient’s tongue to examine the throat — all the way to high-end “implantables” like programmable microchip pacemakers.

Chinese companies have already cornered the local market for low tech items and the nation is now seeking domestic replacement of high-tech ones.

But creating a new medical device takes time and money to do research, perform clinical trials, and seek regulatory approval. It’s that lead time that leaves investors and entrepreneurs at odds.

Since it was founded in 2016 the company has reportedly sunk 20 million yuan into developing a device used to treat lung tumors. But it is yet to launch a product.

“Even if (a startup) successfully develops a new medical machine, the sales to hospitals could be low because few doctors might be familiar with it,” said Yang Zhenjun, vice president of investment bank HaoYue Capital. “So it’s a niche market.”

Another investor who asked to remain anonymous said innovative startups like AccuMed are often passed over for cheaper “copycats” of proven international high-tech devices. He said innovative products bring a higher risk.

With inadequate funding and limited manpower, domestic startups tend to team up with large international companies to promote their products. Even many established Chinese medical device manufacturers don’t have the cash flow to support startups given their limited revenue.

Much has been made of companies like Shenzhen Mindray Bio-Medical Electronics Co. Ltd., which last year posted strong double-digit growth in both revenue to 13.8 billion yuan and profit to 3.7 billion yuan.

But a report released by credit rating agency CSCI Peng Yuan in 2018 shows Mindray is the exception rather than the rule. China is home to around 16,000 medical-device makers. Nine-in-ten are small and midsize companies with average annual revenue of 23 million yuan. In 2017, only three listed Chinese medical device companies made more than 5 billion yuan in revenue. Those were Mindray, Shinva Medical Instrument Co. Ltd. and Zhejiang Dian Diagnostics Co. Ltd.

HaoYue Capital’s Yang said in contrast, international companies have the funds to promote their products by organizing academic conferences and paying to enlist high-profile doctors to endorse them — options outside the reach of domestic startups.

Yang Bin, who founded startup Gimer Medical, said his company promotes its wares to hospitals by partnering with corporations to make use of their sales staff and networks. Others seek funding from international companies as part of their strategy to enter or expand in the China market.

“We have experiences for product commercialization, connections with doctors (in public hospitals), as well as experiences to communicate with Chinese regulators and authorities. These are major reasons why some companies seek partnerships with us,” said Shi Yonghui, managing director of Medtronic China Ventures.

When doctors told an 82-year-old patient surnamed Zhao he needed an implant to replace a herniated disc in his spine, he did what many would — turn to his family for advice.

The decision fell to one of his three sons, who asked not to be named because he is a medical professional in Shanghai. “There were Chinese brands, but the doctor recommended the imported one. Based on my knowledge of Chinese medical technology I trusted the doctor,” he told Caixin.

The fact they could afford the whopping 100,000 yuan bill for the surgery was a big factor in the decision, Zhao’s son said. He and his two brothers split the cost of the surgery, which was performed at a top Shanghai hospital.

Dr. Jane Brophy, a medical sociologist at Melbourne University’s School of Government who specializes in the Chinese health system, says such views are widespread.

A series of scandals has left a “very low level of trust” domestically in the quality and safety of Chinese-made medical products, Brophy told Caixin. But she said the need for trust depends on the type of device. “It’s one thing to get a cheaper but potentially sub-standard version of a Fitbit — but another when it comes to something like a pacemaker.”

Brophy said if the basic technology could be imported from another country that had already invested in its development, there was probably little appetite for Chinese-invented products unless they were radically different from existing ones. “And then you would still come back to the hurdle of public trust.”

Zhao Runhua contributed to this report.