Analysis: Beijing’s View of the Trade War Is Very Different From Washington’s 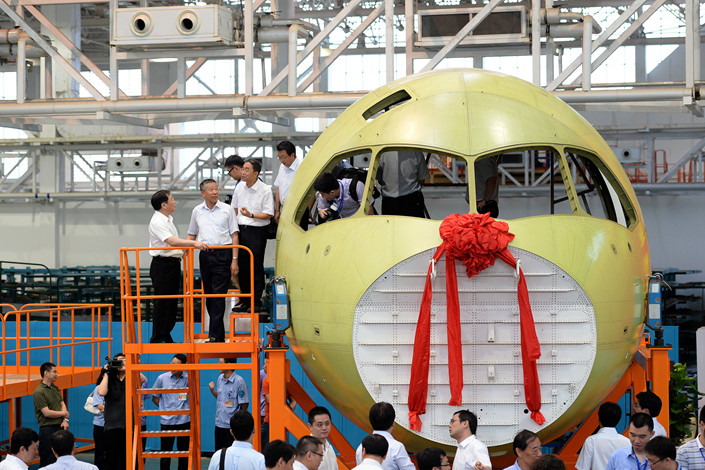 Wars generally require justification. The reason given by the U.S. for launching the trade war is that “China’s acts, policies and practices related to technology transfer, intellectual property, and innovation are unreasonable and discriminatory, and burden U.S. commerce.”

It’s a conclusion that Chinese officials and academics don’t believe stands up to scrutiny.

The Office of the U.S. Trade Representative reached its conclusion after initiating a months-long investigation under Section 301 of the Trade Act of 1974, whose major targets included China’s industrial policies, particularly the technology-related Made in China 2025 initiative. When Chinese Premier Li Keqiang signed off on a notice about the 10-year plan to move China up the high-tech value chain in 2015, he couldn’t have expected it to help trigger a U.S. investigation and eventually a trade war.

Overall, the U.S. side does seem to interpret the situation — judging from the Section 301 investigation report and unofficial documents frequently cited by the report — very differently from their Chinese counterparts, who believe that some of the accusations are misleading or lack solid evidence.

One of the key questions in the debate is whether the Chinese government has set market share targets for the 10 technology sectors directly involved in Made in China 2025.

The Trump administration believes the answer is yes. “The Made in China 2025 Notice expressly calls for China to achieve 40% ‘self-sufficiency’ by 2020, and 70% ‘self-sufficiency’ by 2025, in core components and critical materials in a wide range of industries,” the Section 301 investigation report said. “The ‘Made in China 2025’ Key Area Technology Roadmap sets explicit market share targets that are to be filled by Chinese producers both domestically and globally in dozens of high-tech industries.”

While market share targets have been widely mentioned by U.S. businesses and think tanks, some believe that the targets were set by the Chinese government. However, Chinese officials have argued that this is a misinterpretation: confusing self-sufficiency with market share, and confusing a consultation paper with a government directive.

“The technology roadmap is a report based on research and public consultation by third-party consulting agencies and experts, and is for guidance and reference, but not government instruction,” Xin Guobin, a vice minister of the Ministry of Industry and Information Technology, said in early 2018 (link in Chinese).

According to the Section 301 report, one illustrative example of “China’s use of investment restrictions to pressure technology transfer” is the “Changan Model,” which refers to the joint venture (JV) set up by Ford Motor Co. and Chinese state-owned Chongqing Changan Automobile Co. Ltd. “The model’s advantages include Changan’s control of the JV’s core production technology, the development of domestic innovation capabilities through control of that core technology,” the report cited an article (link in Chinese) published on the website of China’s top state-owned enterprise (SOE) overseer as saying.

However, the report didn’t specify in what way Changan controlled the JV’s core production technology. Nor did it provide evidence of forced technology transfer.

Another of the report’s examples is the state-owned Commercial Aircraft Corp. of China Ltd. (COMAC). The report cited a COMAC press release (link in Chinese) as saying that the company pushed for 16 international suppliers to partner with domestic enterprises to develop key technologies for the C919 jetliner. Then it cited a white paper by the American Chamber of Commerce in China as saying “indigenous innovation industrial policy in the aerospace sector is forcing U.S. companies to form joint ventures … or localize manufacturing in order to participate in domestic aircraft programs such as the C919.”

Still, the report didn’t give any solid evidence of forced technology transfer.

The Section 301 report cited the U.S.-China Business Council’s member survey for 2017, which said that 19% of responding companies had stated that in the last year they had been “directly asked to transfer technology to China.” Of the 19%, 67% said that the request came from a company, 33% said that it came from a central government entity, and 25% said that it came from a local government entity. “There are instances when companies are asked to transfer technology and they cannot either get an acceptable licensing fee or otherwise mitigate the request. In those circumstances, companies choose either to withdraw from the proposed transaction or transfer the technology, even though unacceptable,” the survey said.

During business negotiations, domestic companies seeking technology transfers from their foreign counterparts on a voluntary basis aren’t violating the rules of the World Trade Organization (WTO). Foreign companies clearly understand what benefits they can get through partnerships with Chinese companies, which means such cooperation is mutually beneficial, Yu Yongding, a member of the government-backed Chinese Academy of Social Sciences, said in a column (link in Chinese).

“While rejecting the unreasonable accusations of the Section 301 investigation report, it should be noted that China still has many problems in terms of access for foreign investment and restrictions on (foreign) ownership,” Yu said. “Corruption, (official) inaction and bureaucracy definitely has an adverse impact on the correct implementation of policies for foreign investment.”

Recently, China has promised that it will prohibit local governments and officials from forcing foreign companies to transfer technology to their Chinese counterparts.

The Section 301 report also cited multiple studies as saying that China’s outbound direct investment “is also driven by nonmarket factors,” and “these factors stem from the Chinese government’s extensive intervention — in the Chinese economy in general, and in foreign investment in particular — to achieve industrial policy objectives.”

Still, the report presented no solid evidence for this accusation. The U.S. assumes that “China’s government not only has a clearly defined investment strategy, but also that an army of obedient firms is willingly carrying it out,” Yu said in his column. Yet data show that Chinese firms don’t always invest “in a rational way,” he said. “Instead, companies are making independent — and often irrational — investment decisions, which sometimes lead to large losses.”

“Core technologies can’t be purchased with (only) money,” Xin said at a press briefing (link in Chinese) in 2017. “Developed countries have always set restrictions for us in terms of some technologies, equipment and products. … The Chinese government has never mandated (domestic companies to acquire or merge with foreign companies). Made in China 2025 has no such requirements, either.”

What are the U.S.’s real concerns?

Admittedly, some of the U.S. report’s accusations reflect long-running concerns among U.S. politicians and businesses: China could eventually get ahead of the U.S. economically or even militarily. “Once domestic firms achieve self-sufficiency and close the technology gap, China may erect additional barriers to foreign companies,” the Section 301 report cited a U.S. Chamber of Commerce report as saying.

In addition, some U.S. companies have faced obstacles when doing business in China, but the U.S.’s previous nontariff measures have failed to press China to make real changes. That’s why some of them have hoorayed the trade war.

One of the biggest concerns listed in the Section 301 report is cyber intrusions and theft. “For over a decade, the Chinese government has conducted and supported cyber intrusions into U.S. commercial networks targeting confidential business information,” the report said.

In Yu’s opinion (link in Chinese), there are always winners and losers in cyber wars; it makes no sense for the U.S. to pretend to be an innocent victim, as its capabilities in this arena are a cut above the rest of the world.

As for intellectual property protection, China has made progress in recent years, and will accept the U.S.’s concepts and methodologies in this aspect, Zhang Wenkui, an expert at the Development Research Center of the State Council, told Caixin. “This won’t be a main obstacle in trade talks.”

That said, China still has plenty of room to improve its measures against intellectual property theft, which is easier said than done.

Another concern is about China’s government subsidies to SOEs, which discriminate against the domestic private sector as well as foreign companies.

Although it’s hard to identify, let alone take enforcement action against, subsidies that violate WTO rules, it’s true that it’s easier for SOEs to obtain government subsidies than it is for other types of companies due to their natural links with governments, Zhang said.

Zeng Jia and Jeremy Cappello Lee contributed to this article.