By Ji Siqi and Ren Qiuyu 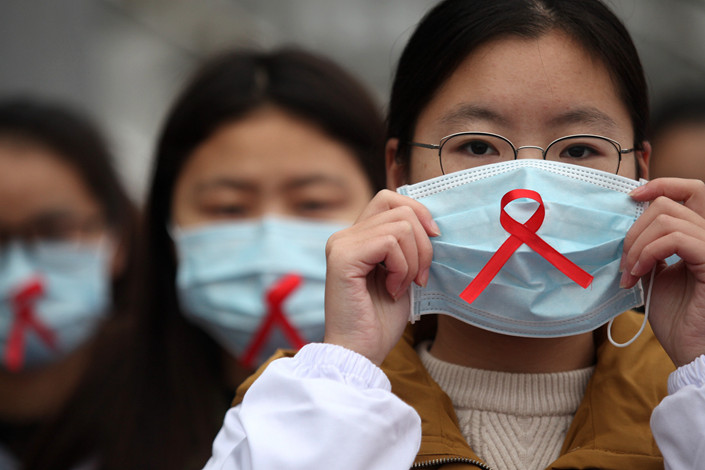 (Beijing) — China must take swift action to arrest an increase in rates of HIV among college students, three experts have written in an opinion piece for the international journal Science.

The authors point to poor sex education in schools and changing attitudes to premarital sex as major contributors to the growing infection rate, which they said had increased 30% to 50% among college students in recent years.

They urge policymakers to spread public awareness of the trend and call for “aggressive prevention and treatment measures.”

“Recent surveys indicate that about half of college students received sex education, which is usually minimal (does not include precautions on HIV and sexually transmitted diseases (STDs)), conservative and heteronormative (which perpetuates a stigma associated with homosexuality and HIV infection),” said the researchers, two of whom are affiliated with Tsinghua University and one of whom works at the Chinese Center for Disease Control and Prevention (China CDC).

Breaking with a tradition that has seen Chinese statistics on the sensitive topic of HIV and AIDS closely guarded, the National Health Commission (NHC) announced at a press conference in November that at the end of September 2018, 850,000 people in the country were living with HIV/AIDS.

Co-author Linqi Zhang told Caixin the statistics about HIV rates among college students were based on CDC China survey data from the years 2012-2015. “We do not have new data on the testing results,” Zhang said by email.

He said the comment piece was intended to raise awareness, particularly among college administrators and students. Education and health care professionals need to team up to “tackle this sensitive and important” issue, he added.

In 2015 the annual number of new HIV cases among students in China increased to 3,236 from 482 in 2008, according to data from the NHC. More than three-quarters of people diagnosed that year were aged between 18 and 22.

While previously in China HIV/AIDS was transmitted through drug use or blood collection, the main mode of transmission now is through sex. The NHC estimated in November that 90% of people with HIV/AIDS were infected through sexual transmission, compared with 43.6% in 2005.

In December 2018, a research team from the Department of Psychology at Beijing Normal University published a report on minority students at universities in China, focusing on LGBTQ students. According to the report, fewer than one in 10 students said that LGBTQ information was included in the sex education curriculum.

This indicates a gap in sex education in Chinese high schools and increases the risk of gay men being infected with HIV. It also further deepens the stigma associated with HIV/AIDS among gay men.

According to data from the China CDC, men who have sex with men (MSM) had the highest HIV infection rate among all Chinese people in 2015. According to a correspondence paper published in The Lancet Public Health last year, inadequate discrimination laws alongside traditional values meant 90% of Chinese MSM will marry women, with their wives becoming a high risk group.

The NHC warned in November that roughly 30% of people infected with HIV in China would not know their status.

The opinion piece called on policymakers to launch education campaigns that take advantage of all channels used by students, including the internet and social media.

“Colleges also could provide a readily accessible means of testing for infections,” the article adds. “In 2018, China’s CDC made anonymous HIV urine-testing services available through vending machines in over 40 universities. This not only provides access to HIV/AIDS testing, but also improves awareness and enhances students’ motivation for HIV protection. This pilot approach certainly could be scaled up to a national level.”

Some researchers have said that the uptick in HIV/AIDS infections could be the result of more widespread testing and awareness, and the 0.09% prevalence rate in China remains lower than that of the U.S.

However, the authors of the opinion piece said that “the challenge is for China to show a much stronger — and faster — will to act” to address the rising number of infections.