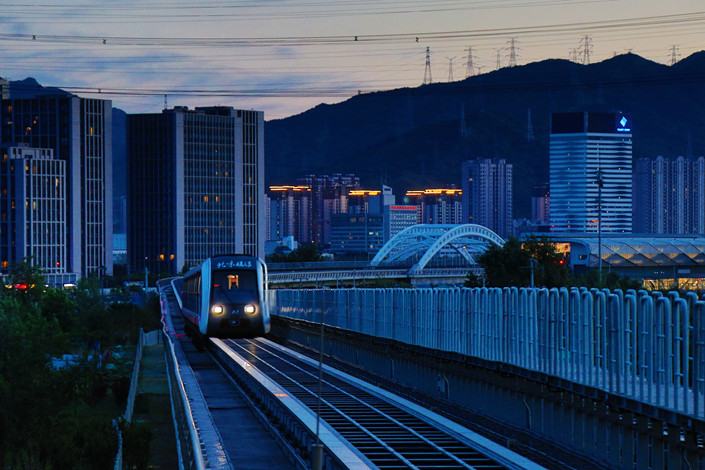 A train runs along a magnetic levitation rail in Beijing on Thursday. Photo: VCG

Global economic conditions have stabilized in first quarter of 2019, though latest macro data show fading momentum, proving that the early macro spring could be followed by a short-lived summer.

Significant downside risks remain, chief among them the ongoing trade dispute between the U.S. and China which, if it escalates, could have global ramifications.

In early May, a steady stream of positive news gave the impression that a U.S.-China trade deal could be reached. However, on May 10, the U.S. decided to increase tariffs on $200 billion of Chinese goods from 10% to 25%, representing a significant escalation of the trade war. On Sunday, China released a white paper formalizing its stance on the negotiation with the U.S., alluding to the hard work involved in achieving progress.

Overall, we estimate the impacts of a trade war on global economic growth as roughly unchanged from our last assessment in the fourth quarter of 2018. In scenario 1, U.S. tariffs of 25% on all Chinese imports would reduce global growth by around 0.2-0.5 percentage points. At the same time, we believe the impact of the trade war on global economic growth is expected to weigh longer than previously expected and could be more severe if negative sentiment and growth feedback loops materialize.

At this juncture, the main impact would be on the U.S. and China themselves. However, compared with our last assessment, with slightly stronger macroeconomic conditions, China is now in a better position to weather the shock. Stimulus measures are beginning to feed through into the economy as reflected by the strong growth performance in the first quarter.

In China, real gross domestic product (GDP) growth stabilized at 6.4% in the first quarter, with consumption contributing 65%, reflecting the resilience of domestic demand in the face of external headwinds. This is a result of the government’s efforts to make the more domestic-driven service sector, rather than trade and investment, the key growth engine of the economy.

The government’s stimulus measures have also supported growth. China has set a slightly higher fiscal deficit ratio at 2.8% for 2019, up from 2.6% in 2018. This demonstrates willingness to apply stimulus, at the risk of higher leverage, to ensure stable economic growth and provide a cushion against any shocks from possible failure to secure a trade deal with the U.S.

The U.S. has also reported better-than-expected economic performance in the first quarter. More than half of the 3.1% annualized GDP growth was driven by the volatile inventory and net export categories. Final domestic demand, however, was much weaker. As such and given the geopolitical tensions, we believe global recessionary fears will increase again. With respect to the U.S. specifically, we see a 35% probability of recession in 2020, above the consensus forecast.

We have revised up, marginally, our full-year 2019 growth forecasts for U.S. to 2.5% (from 2.2%) and for China to 6.3% (from 6.1%). This is also taking into account global leading indicators, which have improved since the start of the second quarter. For instance, manufacturing PMIs in the U.S., U.K., the euro area and China were in expansionary territory in April, and less contractionary in Japan.

On the monetary front, after the dovish shift in Federal Reserve policy, central banks globally have gone into “wait-and-see” mode, which in our view, reduces the risk of worsening of macro conditions leading to excessive tightening of financial conditions. All the major central banks left policy unchanged in April (with some minor tweaks), as we had expected. The People’s Bank of China is more cautious with the use of conventional tools, instead implementing targeted medium-term liquidity loans to steer funds toward specific sectors. It also further lowered the reserve requirement ratio for some rural commercial banks to 8% (effective May 15) as a vehicle to boost lending to small and midsize enterprises.

We expect the Fed, the European Central Bank and the Bank of England (BoE) to keep rates unchanged this year. China also faces less urgency to ease monetary policy. Overall, the central bank easing bias — the put for markets — is alive as long as inflationary pressures remain in check. Of any, the BoE could be the first to move, contingent on developments on the Brexit front.

Keep a watchful eye on inflation

We see a rising risk of inflationary pressure, which could weaken the central bank’s easing bias. Underlying inflation is already picking up gradually in an environment of tight labor markets and accelerating wage growth.

Oil prices have rebounded from the turn-of-the-year lows (up almost 40% from 2018 lows), which will push inflation somewhat higher. In China, the headline consumer inflation rebounded to 2.5% in April, and factory-gate inflation rose to 0.9% alongside rising oil prices. With central banks wary of adverse financial market reactions triggered by monetary normalization, and with interest rates put on hold for longer, inflation could increase to above target levels. This risk is higher in the U.S. than in Europe and China.

Jérôme Haegeli is group chief economist for Swiss Re and the World Bank’s co-chair for the global infrastructure facility.