China to Audit 77 Drugmakers in Fight Against Health Care Kickbacks

By Liang Zhen and Tang Ziyi 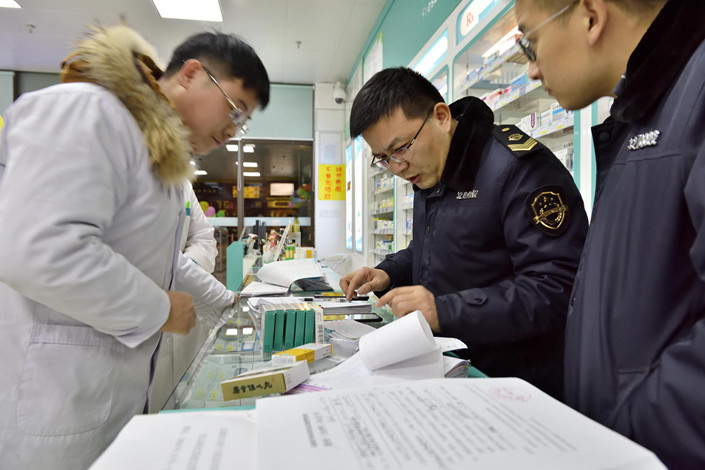 Law enforcement officers check purchase certificates and the quality of drugs at a pharmacy in East China’s Jiangsu province on Jan. 29. Photo: VCG

China is intensifying scrutiny of illegal kickbacks paid by pharmaceutical companies as part of efforts to drive down drug prices, analysts say, as it rolls out a plan to audit 77 drugmakers across the country.

Industry observers have linked the audit to a Beijing initiative to tackle the entrenched system of bribery in the health care industry. In China, some drugmakers and company representatives routinely bribe doctors and hospital administrators to convince them to carry and prescribe certain brands. Auditors will try to determine whether there are inconsistencies in the pharmaceutical companies’ books.

The move comes weeks after two of China’s largest listed drugmakers were probed by regulators. Kangmei Pharmaceutical Co. Ltd. confirmed it falsified transaction records to overstate its cash holdings on hand by 29.9 billion yuan ($4.3 billion). In a response to a Shanghai Stock Exchange query, Shandong Buchang Pharmaceuticals Co. Ltd., whose chairman was separately embroiled in a college admissions bribery scandal, said that it’s common for a pharmaceutical company to have a high promotion costs. Buchang spent 90% of its sales costs on so-called “academic promotion” events in 2018.

Chen Hao, a medical policy researcher at Huazhong University of Science and Technology, said pharmaceutical companies in China typically counted kickbacks, or “red envelops,” given to doctors among their expenses for academic conferences and other events in order to mislead regulators.

In China many physicians rely on bribes from patients and drug sales representatives for the bulk of their income due to their low base salaries. Pharmaceutical companies, which offer bribes to doctors, recuperate the costs by raising drug prices.

Chen said he believed inconsistencies would turn up in the books of most of the audited companies.

Kickbacks can persuade doctors to overprescribe expensive drugs that patients may not need, and which could even put their health at risk, experts previously told Caixin.

Chen blamed the practice for China’s high drug prices, which he likened to “stealing” from the state-backed medical insurance system and patients.

China has launched new policies in recent years to streamline the drug distribution chain in efforts to curb high prices. In 2017 it launched a nationwide “two-invoice system” to reduce intermediary selling by limiting the maximum number of invoices between drugmakers and hospitals to two.

The audit is likely a way for the government to check companies’ accounts in order to understand whether the “two-invoice system” is working, or whether companies have found new methods to hide kickbacks, Chen said.

“At the end of the day, (pharmaceutical companies) can reach illegal objectives through legal methods,” Guo said.