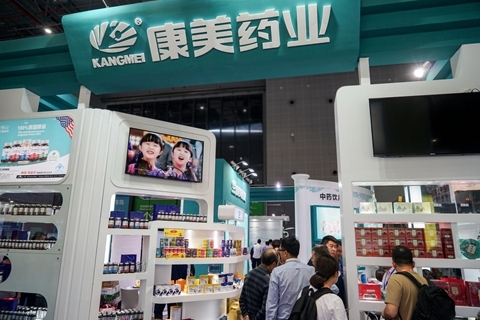 One of China’s largest listed drugmakers has asked the Shanghai stock exchange to suspend trading of its shares from Monday as it tries to limit the damage after regulators confirmed the company fabricated its financial reports between 2016 and 2018.

Kangmei tried on Saturday to try to limit the damage, confirming in a stock filing (link in Chinese) that the company moved 8.88 billion yuan ($1.28 billion) through affiliated companies to purchase its own shares. It admitted that the practice made it “difficult for investors to judge the company’s prospects and investors’ rights and interests may have been damaged,” in a filing with the Shanghai exchange.

The filing announced that the company had asked the exchange to suspend trading of its shares from Monday, May 20. Trading in the company’s shares would then be moved to the risk warning board, where stock price changes would be limited to a daily movement of 5% to curb volatility.

The company’s shares have been in tumult since April 30, when it disclosed that regulators were investigating suspicions that it overstated its cash reserves on hand by 29.9 billion yuan ($4.3 billion). Since then, shares have fallen by over a third, with declines regularly hitting the stock exchange’s 10% daily movement limit.

Several audit professionals told Caixin they were concerned that there may be problems in Kangmei’s financials beyond accounting errors, given the vague language and lack of logic in its corrected financial statement. The company may have intentionally inflated its cash holding and inventories to boost profit, they said.

But earlier in the month company founder and chairman Ma Xingtian described the overstatement as an “accounting error” resulting from loopholes in internal controls and financial management. Correcting for the errors, the company’s net profits in 2016 and 2017 were reduced by half.

Kangmei has previously been involved in several bribery cases involving government officials. According to court documents released last June, the company paid Cai Ming, former director of the drug safety supervision department at the Guangdong Province Food and Drug Administration, 300,000 yuan to help Kangmei and 27 other pharmaceutical companies obtain drug approvals and drug safety certificates in 2014 and 2015. Cai was convicted of accepting bribes and sentenced to eight years in prison.

In February, the company’s financial position put it at risk of defaulting on $300 million of its bonds. The crisis was averted after the Guangdong provincial government stepped in with financial help.

The fallout from the financial scandal has also hit Kangmei’s accounting firm, GP Certified Public Accountants Co. Ltd., with the company losing two customers last week on concerns over its role in the accounting errors. It is likely to face the loss of further business as more than 40 of its clients have yet to hold their annual shareholder meetings to decide on accounting partners. Data from market information provider WindInfo showed that GP Certified was the auditor of 92 listed companies in 2018.