CX Daily: How China's Ministry of Finance, Regulators and Governments Are Trying to Save Zhenjiang 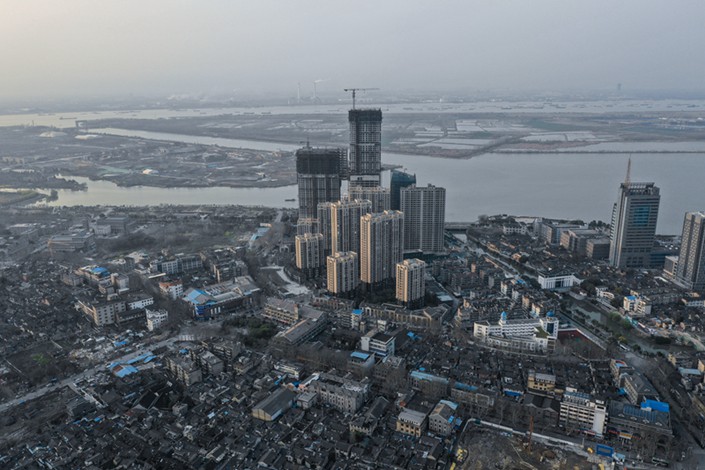 How China's Ministry of Finance, regulators and governments are trying to save Zhenjiang, pt. 2

As we explored in Part 1 of our series, 2019 marks the beginning of a three-year peak debt repayment period for local government financing vehicles (LGFVs), meaning Zhenjiang’s situation is dire. Any arrangement hammered out is being closely watched for signs of what policymakers will be prepared to accept in the hunt for a solution for dealing with hidden liabilities across the country.

Under an agreement with the MOF last year, Zhenjiang was supposed to cut expenditures and sell off assets before it would receive financial support from the province and elsewhere, we learned. But, it turns out, local officials are not even done compiling a list of what the city and its LGFVs own, valuing the assets and verifying their ownership.

Meanwhile, local officials are also pinning hopes on a huge increase in the quota for sales of special purpose bonds. They also hatched a plan with the local branch of the China Development Bank (CDB), which is heavily involved in LGFV financing, to perhaps receive bailouts.

But wherever Zhenjiang looks, there lie obstacles. Check out Part 2 of our series.

China's exports of goods rose 14.2% YOY to $198.7 billion in March, growing at the fastest pace in five months, government data showed Friday. That compared with a 20.7% decline in February and was ahead of the median forecast of a 6.5% increase in a Bloomberg survey of economists.

Meanwhile, imports fell 7.6% YOY to $166 billion in March after a 5.2% slide in February. Imports missed the Bloomberg median forecast of a 0.2% increase. The trade surplus rose to $32.7 billion from February’s $4.1 billion.

Malpass said that China is naturally evolving from being a major borrower from the World Bank to a smaller borrower and is also becoming a bigger donor and shareholder. Before being unanimously elected president April 4, he was the U.S. Treasury’s undersecretary for international affairs under President Donald Trump. He has joined trade delegations for negotiations over a U.S.-China trade deal.

The government of Xianyang illegally borrowed 1.14 billion yuan ($170 million) off the books from two local government financing vehicles (LGFVs) for infrastructure projects between 2017 and 2018, the Shaanxi Provincial Finance Department said. It's the latest example of the mounds of hidden local government debt that China is working to clean up.

Nine officials of the Xianyang administration committee and the two LGFVs were put under investigation or given formal warnings or verbal reprimands, the Shaanxi Provincial Finance Department said. In the next step, the government and regulators will punish the financial institutions that provided guarantees for the illegal borrowings, the department said.

PBOC deputy: Financial opening-up is a path China must follow

Chen Yulu, deputy governor of the People’s Bank of China, said China will open up its financial sector “across the board” and create a “win-win” situation for institutions and investors.

At a keynote speech delivered Wednesday at the Caixin Roundtable in Washington, Cheng outlined several changes that China will make to better embrace foreign investors and integrate with global markets, including further easing restrictions on foreign investors’ holdings and better adopting the approach of pre-establishment national treatment and the negative list. Cheng ranks second in the central bank’s leadership after Governor Yi Gang.

The country’s Prime Minister Mahathir Mohamad, had said that the 688-kilometer (428-mile) East Coast Rail Link contained “damaging terms” and that it saddled Southeast Asia’s third-largest economy with excessive debt. But after nearly a year of negotiations, Malaysia on Friday said Malaysia Rail Link Sdn Bhd has signed a supplementary agreement with CCCC to resume the project at a much reduced cost.

It would seem that concern over whether China’s consumers will ditch their cars for ride-hailing is intensifying. After an initial July announcement, more details have emerged for what will be a 9.76 billion yuan ($1.46 billion) ride-hailing and new-energy vehicle joint venture created by state-owned automakers Chongqing Changan Automobile Co. Ltd., China FAW Group Corp. and Dongfeng Motor Corp.

The three car makers will each hold a 15% stake in the venture based in Nanjing, East China’s Jiangsu province. Electronics retailer Suning.com Co. Ltd. will be the biggest shareholder, with a 19% stake. Other prominent investors include Tencent Holdings Ltd. and Alibaba Group Holding Ltd.

BP bows out of fracking in China

BP PLC is set to stop drilling for shale gas in the southwestern province of Sichuan, becoming the latest international oil major to quit this kind of project in China.

The British oil company will formally announce the move after holding a meeting with its local partner China National Petroleum Corp. to negotiate the exit terms, sources told us. BP is joining other international oil and gas giants including Exxon Mobil, ConocoPhillips, Royal Dutch Shell and ENI, that have stopped fracking in China, reflecting the unique challenges of developing shale gas in China such as complex geology and low well productivity.

The website of Visual China Group (VCG), China’s biggest stock photo provider and a partner of Getty Images, was down Friday after its commercial claims to the world’s first photograph of a black hole triggered accusations of copyright theft.

The company announced on Thursday that commercial users in China would need to seek VCG’s approval before using photos of the black hole downloaded from its site. But Chinese social media users cast doubt on whether VCG had obtained permission from the scientists who made the image. Online commenters also found VCG claimed to own copyright to photos of China’s national flag and badge.