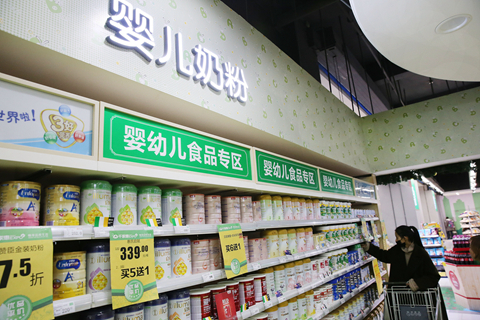 Will China’s baby formula makers ever overcome the melamine contamination scandal that killed six infants in 2008?

Not without continuing to regain confidence and stabilizing supply, experts told Caixin, in response to a recent government plan to boost the percentage of formula on the Chinese market that comes from domestic suppliers.

China’s top planners said last week that they hope to see the share of domestically produced formula used by consumers in China rise to 60%. The current share is around 40%, analysts estimate. The government also hopes to promote consolidation in the industry through mergers and acquisitions, to increase efficiency.

This will be a challenge as there remains a large gap in brand recognition of imported and China-made baby formula among Chinese people 11 years after melamine-tainted formula from well-known domestic dairy brands killed six infants and sickened more than 300,000, one industry insider told Caixin.

The source said that many domestic brands had improved significantly in terms of safety and quality, but the biggest challenge for producers was still to “restore market confidence.”

At the same time, China’s dairy farmers are usually small players vulnerable to price fluctuations, and ambiguous regulations have caused a deterioration in the business environment, forcing farmers out of the industry, dairy analyst Wang Dingmian said.

Additionally, many larger domestic formula producers are reluctant to acquire and use the products of smaller companies because they don’t trust the safety standards of smaller producers, said Song Liang, another dairy industry analyst.