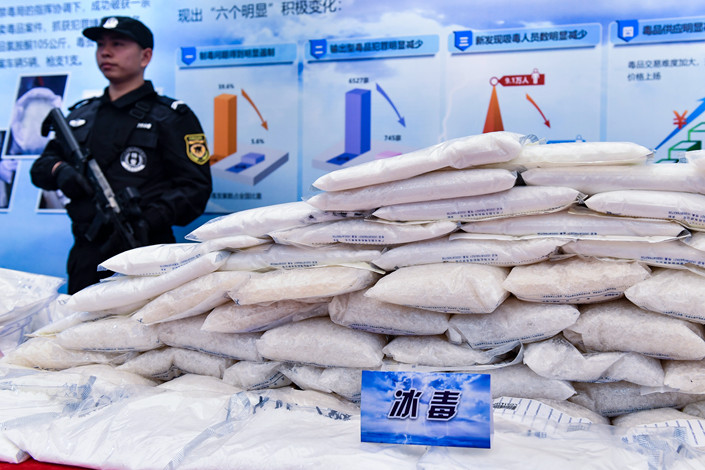 As evidence, it points to figures on drug busts at the border and elsewhere. But the increasing politicization of illegal drugs in China amid trade war tensions with the U.S. has left some experts questioning the conclusions.

Drugs smuggled in from overseas are a source of “increasing harm” and a “potential threat” to the health of the nation, China’s National Narcotics Control Commission (CNNCC) said in a report released in hard copy at a press conference last week.

The report found Chinese seizures of illegal, mostly synthetic drugs from the Golden Triangle — which straddles Laos, Myanmar and Thailand — rose 17.6% year-on-year to 29.6 tons in 2018. The commission also reported seizing 1.4 tons of cocaine from South America last year, up 3.4 times from the year before.

But even taken at face value, those figures “don’t necessarily support the conclusions that drug production has decreased in China or that the percentage of foreign-produced drugs entering China has increased,” said Jeffrey Higgins, a retired special supervisory agent with the U.S. Drug Enforcement Administration.

The reduction in seizures at home, for instance, could also be explained by a lack of investigative success, a reduction in funding, the element of chance, or the lack of political will to curb drug trafficking, Higgins said. Or the figures could have been “created from whole cloth to further a narrative that China is controlling its illicit drug trade.”

Meanwhile, increased foreign drug seizures could be explained by ramped-up border security rather than an increase in the actual quantity of foreign drugs being smuggled in, Higgins said. They could also be skewed by a relatively small number of large seizures. However U.N. data does suggest methamphetamine production in Southeast Asia has increased, which Higgins said could correspond with more imports into China.

China has been under immense pressure to expand a domestic crackdown on illicit drugs. The country is said to be one of the world’s major manufacturers of the powerful synthetic opioid fentanyl, which the Trump administration has regularly name-checked in trade negotiations in efforts to ramp up pressure.

A laboratory-made drug 50 to 100 times more potent than morphine, fentanyl and its analogs have been described as an “epidemic within an epidemic” in the U.S., where they contributed to around 29,000 of the nearly 50,000 opioid deaths and two-in-five of the total drug overdose deaths in 2017.

In December, China agreed to list the drug as a controlled substance in a move that the White House called a “wonderful humanitarian gesture.”

“China claims they are taking efforts to control their opioid market and crack down on Fentanyl analogues. That may be true, but even if their intentions are genuine, it is very difficult to eliminate clandestine labs and legitimate labs dual-purposed for illicit usage,” Higgins said.

“More importantly, China has little incentive to assist the United States with an American opioid epidemic and strong motivation to appear that they are doing so.”

Gloria Lai, Asia regional director of the International Drug Policy Consortium, a global nongovernment organization that aims to curb drug-related harm, said increases in cultivation, production and trafficking of drugs in areas outside China were “obvious reason” for the rise in incoming drug seizures. But there were several other possible explanations, including “increased law enforcement suppression activities, and also increased demand for drugs by consumers in China.”

Lai said those engaged in the illegal trade “constantly adapt their tactics” to avoid detection. “It is therefore important to note the serious limitations of law enforcement agencies in ever being able to eliminate or even reduce drug markets, and the futility of investing heavily in law enforcement strategies and tough punishment for all drug-related activities,” Lai told Caixin. She said this was demonstrated in China, “which has implemented severely punitive drug policy measures for well over a century but still sees large volumes of drug supply.”

Lai said better responses were needed to manage drug-related harms and “advance the health and welfare of people who use drugs and their families and communities.”

The CNNCC report singled out the online drug trade as a major new trafficking method in China. Police arrested a total of 2,062 suspects and confiscated and 247 kilograms of drugs purchased online 2018, the report said.

According to the report, China had 2.4 million illegal drug users in 2018, an apparent drop of 5.8% from the year before. Methamphetamine and heroin were the most commonly used illegal drugs, and were taken by 56.1% and 37% of drug users respectively, it said.