Battered Interbank Market to Get $580 Million Boost From Brokerages 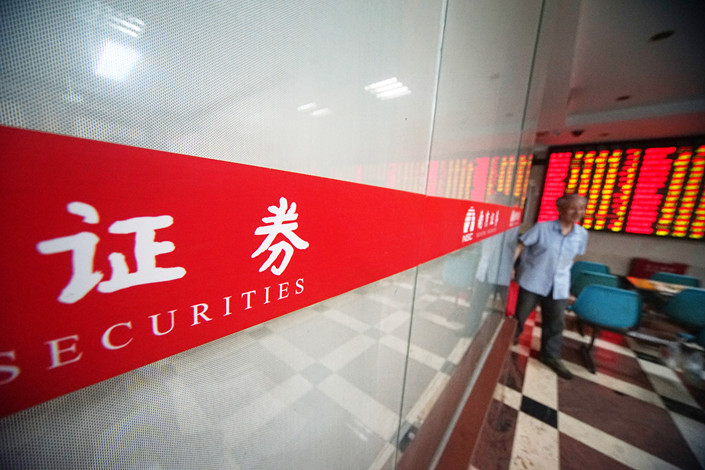 Two of China’s major securities companies are planning to issue short-term commercial paper after the central bank raised their short-term debt quotas in an effort to boost liquidity to nonbank institutions amid growing stress in the interbank market. But with institutions reluctant to pay the interest rates brokerages are demanding on their loans, the money may not flow to the companies regulators are seeking to help.

Guotai Junan Securities Co. Ltd. (link in Chinese) and Citic Securities Co. Ltd. (link in Chinese) are each aiming to sell 2 billion yuan ($290 million) of short-term commercial paper to “raise more working capital,” according to filings made to the National Interbank Funding Center on Monday. The additional funds will enable them to offer loans backed by collateral to other non-bank financial institutions (NBFI).

Boosting the fundraising quotas for securities firms is the latest move by the People’s Bank of China (PBOC) to calm the interbank market following the state takeover of Baoshang Bank, a regional lender based in northern China, in May. The announcements by the two companies followed meetings between regulators, banks and brokerages last week to discuss ways of easing a liquidity crunch triggered by the seizure.

The interbank market oils the daily wheels of the country’s financial system and provides most of the short-term funding for banks and NBFI. Big banks, the source of most of the money in the market, have become more risk averse and wary of providing funds to smaller banks and NBFI, especially after the central bank put an upper ceiling on the repayment of Baoshang Bank’s liabilities, promising to guarantee full payment of deposits and interbank liabilities only up to 50 million yuan.

When banks and NBFI borrow from each other they do so using repurchase agreements which require them to post assets as collateral. As concerns grew about the potential impact of Baoshang Bank’s collapse on the banking system, institutions became more risk averse and trust in the market diminished, making lenders more choosy about who to do deals with and what kind of bonds they would accept as collateral — traders have told Caixin that some banks would not even accept bonds with ratings of AA+.

Smaller banks also found negotiable certificates of deposit (NCDs), a major tool for them to borrow money and bolster their own liquidity, more difficult to sell, and both issuance and transactions fell. That meant they had less money available to lend to NBFI, including securities firms and trusts, and to buy their products.

NBFI subsequently began to experience a credit crunch as they struggled to get money to repay their debts, redeem financial products sold to customers and buy corporate bonds. Some defaulted on financial products and repurchase agreements. As these institutions play an important role in supporting the real economy and in the allocation of households’ assets, they need to be supported to prevent further defaults, analysts at TF Securities wrote in a research note on June 19.

The actions of the PBOC and other regulators to calm market jitters and ensure sufficient liquidity in the interbank market have brought interest rates in the money market back down after they surged following the Baoshang Bank takeover. The overnight weighted average interbank pledged repo rate (DR001), which reflects the cost of borrowing between depository institutions in the interbank market, dropped to 0.9931% on Monday, the lowest since Dec. 15, 2015. That’s down from 2.79% on May 28, four days after the authorities took control of the bank.

The overnight Shanghai Interbank Offered Rate (Shibor), a gauge of interest rates banks are prepared to offer for lending unsecured funds to other banks, dropped to 1%, the lowest since Sept.1, 2009.

R001, the repo rate that reflects the cost of borrowing among banks and NBFI in the interbank market, also decreased, indicating the liquidity crunch faced by the broader market has subsided.

The question now is whether the money will end up being used for the purpose specified by the central bank. A person close to the PBOC told Caixin that while it won’t be an easy task, regulators have set rigid targets for the brokerages.

The China Securities Regulatory Commission (CSRC) has told securities firms to provide liquidity for the asset management products of brokerages and certain fund management companies, a trader in the proprietary trading department of a major brokerage told Caixin. Reports of transactions should be submitted daily to the regulator. Brokerages will accept as collateral bonds with a credit rating as low as AA and give priority to counterparties with which they do regular business, the person said.

Even so, some market participants doubt whether all the additional liquidity can be used to relieve the credit crunch. Major brokerages have to pay around 3% interest on their short-term commercial paper, and the interest rate NBFI will have to pay to borrow from them will end up at around 3.5%, which is very high considering the seven-day repo rate is around 2%, a bond trader at a brokerage told Caixin. NBFI may not be prepared to pay that much and even if they can, they may not have the necessary collateral required by the brokerage, he said.

If the securities firms can’t lend to NBFI will the money be used instead by their proprietary trading business for more profitable activities such as pledged-share lending or margin financing, the trader said. To head off that possibility, regulators may need to impose a limit on brokerages’ proprietary business, he said.

An investment manager with a small securities firm told Caixin this week that a major brokerage firm and an NBFI were in talks over a loan but couldn’t reach a deal because the brokerage was demanding an interest rate of 7% and a big discount on the collateral being offered, which the borrower couldn’t accept.