By Ke Baili and Yang Rui 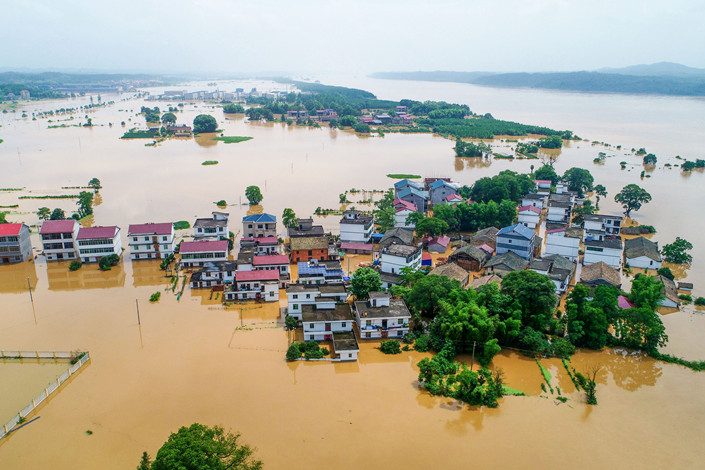 China, the world's biggest contributor to greenhouse gas emissions, will host the first regional office of an organization chaired by Ban Ki-moon, Bill Gates and World Bank CEO Kristalina Georgieva that aims to support efforts to adapt to the disastrous effects of climate change.

“There are many ways nature has warned humanity — severe flooding, long spells of drought, and extreme weather patterns,” former U.N. Secretary General Ban Ki-moon told Caixin on Thursday, referencing forest fires in California this year and cyclones in the Dominican Republic. “We cannot negotiate with nature. Nature goes its own way. We have to adjust and adapt,” he said.

Chinese Premier Li Keqiang officially launched the Global Center on Adaptation’s first regional office in Beijing on Thursday during a visit to China by Prime Minister Mark Rutte of the Netherlands, where the center was founded. The center's goal will be to build resilience to climate change and help bring adaptation efforts that have worked in other parts of the world to China and vice versa.

China has been criticized as the world's largest emitter of greenhouse gases, said Ban, but the country is meeting its climate goals ahead of time. Global efforts are not on track however, after the withdrawal of the U.S. from the Paris Agreement, which he said had a political and psychological impact on many countries.

China has been key in developing green technology over the past two decades, investing more in renewable energy than the U.S. and the EU combined in 2017.

China's water resources will be one of the center’s first focusses, Ban said, with plans to support the development of “sponge cities” across the country which are intended to prevent flooding. “The ambition should be to expand that to all the cities in China,” said Ban. China's food and agricultural security, which is under threat from floods and droughts, will be the other priority, said Verkooijen.

China's restrictions on emissions from its coal power and steel industries were looser last winter than the year before, with some observers blaming the extra pressure the country was facing from slowing economic growth and the trade war with the U.S. The country's economy grew 6.6% in 2018, the lowest rate since 1990.

China should “be practical,” as a country which has enjoyed extremely high economic growth rates and is still doing very well by global standards, said Ban. The “polluting now and cleaning up later” model is a thing of the past, politically, morally, and economically, said Verkooijen, pointing to a World Bank report published last week that claimed a $1 investment in more resilient infrastructure can yield a return of $4.

China has recognised that “while mitigation alone is not enough, the costs of adaptation are less than the costs of doing business as usual,” said Verkooijen in a press release accompanying the announcement.

China's economic clout and the Belt and Road Initiative, its ambitious overseas infrastructure development plan, also give it much power to advocate the importance of climate issues in developing countries, said Ban.

Belt and Road projects include high carbon-producing coal-fired power plants, however. State-backed Chinese lenders are financing or looking to finance a quarter of coal projects taking place overseas, a report found in January. The government should thoroughly assess climate-related risks, particularly with infrastructure projects along the Belt and Road, said Ban. All infrastructure investment should be carbon neutral, he said.

Sarah Price contributed to this report