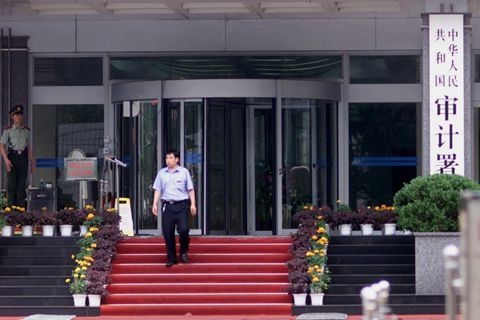 The NAO said it found five commercial banks that provided a combined 50 billion yuan of credit that was linked to borrowers’ deposits and purchase of wealth management products.Photo: VCG

The State Council asked the National Audit Office (NAO) to conduct the audit on the enforcement of central government's 2018 budget. In its report issued Wednesday, the NAO said it found five commercial banks that provided a combined 50 billion yuan ($7.3 billion) of credit that was linked to borrowers’ deposits and purchase of wealth management products.

These are not new issues in the banking sector. A 2012 rule issued by the banking regulator specifically prohibited such practices by banks.

Under a series of policies to encourage lending to small and private businesses rolled out since last year, banks are under pressure to reach goals for small business loans while maintaining profits. This has prompted some banks to use disguised ways to boost revenue, such as asking corporate borrowers to transfer their loans into deposits, according to market participants.

In addition to access to conventional bank loans, private businesses also have multiple private financing channels, but borrowing costs are very high, said Hu Zejun, auditor general of the NAO. The interest rates offered by microfinance companies are generally 10% to 20%, and some private and online borrowing costs are as high as 30%, Hu said.

Sometime banks require private businesses to pay back their current loans before renewing, so borrowers have to resort to high-cost channels for bridge loans. A survey of 393 companies found that some had to pay bridge loan interest rates as high as 108%, according to the report.

Hu also reported on the implementation of the policy measures encouraging lending to small and private businesses. The report found that credit coverage has been expanded, but difficulties in obtaining financing and high costs have not been fundamentally alleviated.

The report found that some financial institutions in three provinces covered up more than 100 billion yuan of nonperforming loans through fraudulent reporting.

The auditor also found that 42 rural banks had nonperforming loan ratios higher than the 5% warning line set by the banking regulator and well above the national average of about 2%, the report said. The rising ratios highlight the impact of tighter regulations and have caught market attention as risky loans could easily turn sour amid an economic slowdown.