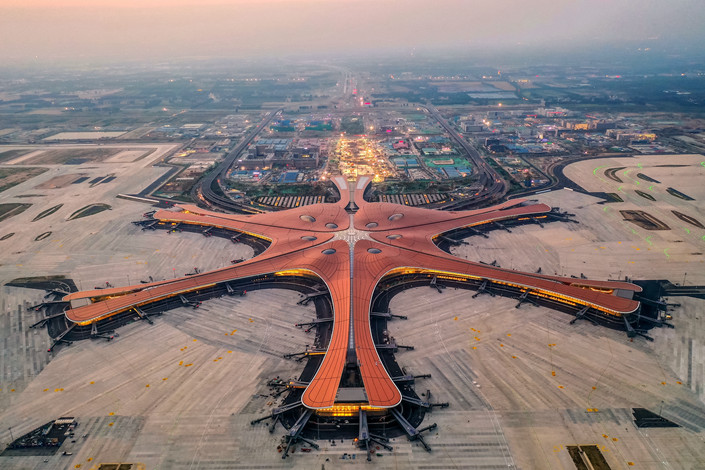 Operations at the new Beijing Daxing International Airport will start by the end of September. Photo: VCG

(Bloomberg) — Beijing’s second international airport has been completed — and it’s expected to become one of the world’s busiest.

Designed to take the pressure off the overcrowded Beijing Capital International Airport, the new site south of the city will be able to handle 72 million passengers a year by 2025 and 100 million by 2040.

Combined, the two airports will handle 170 million fliers annually by 2025, according to official estimates.

China’s growing middle class is fueling a travel boom, and the world’s second-largest economy may displace the U.S. as the largest aviation market by 2022. With the new $12.9 billion airport, Beijing is joining a short list of major cities such as London, New York and Tokyo that have multiple international airports.

Operations at the new Beijing Daxing International Airport will start by the end of September following six major test runs, the official Xinhua News Agency reported. Road and rail links, including a high-speed subway line, are already in place.

Carriers such as China Eastern Airlines Corp. and China Southern Airlines Co. will start flying from the new facility later this year. The transition should be completed by the winter of 2021, according to the Civil Aviation Administration of China.

Daxing will add flight routes at a faster pace than the existing airport, Zhou said. The new airport will allow China Eastern and China Southern to increase their presence in Beijing, he said.