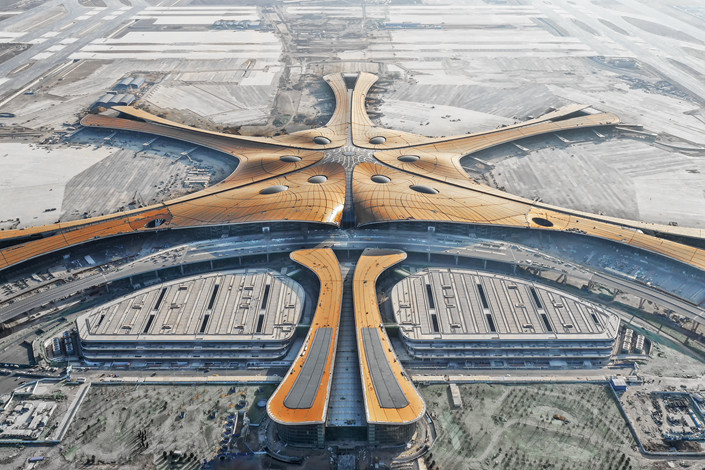 An aerial view of Beijing Daxing International Airport under construction in Beijing on Jan. 2. Photo: IC

As the Chinese capital gears up to open one of the world’s biggest airports by September, a host of carriers are jostling to operate highly popular routes to South Korea and France.

According to the country’s civil aviation authority, seven airlines have applied to fly from the new Beijing Daxing International Airport to Seoul, while four have done so for the Daxing-Paris route. The authority did not name the specific Seoul or Paris airports involved.

South Korea and France are currently the most sought-after routes at the Daxing airport, after China inked aviation agreements with both countries to increase flight frequencies amid stronger diplomatic ties.

In March, Beijing and Seoul held a round of aviation talks, signing a memorandum of understanding to add 14 weekly flights between Beijing and Seoul to support the development of the new Daxing airport. As part of the agreement, seven additional weekly trips have been allocated for the Seoul Incheon-Shanghai and Busan-Shanghai services.

“The China-South Korea flights have hit turbulence in the last few years in the wake of the THAAD controversy,” aviation specialist Lin Zhijie told Caixin. “Now the routes have resumed their growth momentum, and carriers want to tap that.”

Bilateral relations soured after Seoul agreed to a U.S. plan to deploy a missile defense system, called Terminal High Altitude Area Defense, or THAAD, in mid-2016. That fueled Chinese boycotts of South Korean businesses and also dampened tourism to the once popular destination.

A bilateral aviation deal signed by China and France in March 2017 stipulated that flights between the two sides will be increased to 126 per week over the next three years, up from 50 flights per week prior to the deal.

China has been on an infrastructure spending spree over the last decade, with a total of 234 airports built across the country in that time. In December, China’s aviation regulator said it is aiming to almost double the number to 450 by 2035.

The latter, located in the municipality’s northeast, is one of the most congested airports in the world. It is designed to handle 82 million passengers a year, a number it exceeded by 12 million passengers in 2016. Beijing’s second civilian airport — the decades-old Beijing Nanyuan Airport — has an annual capacity of only 6 million.

Daxing airport is located 46 kilometers (28.6 miles) south of the city center. It is designed to eventually handle 100 million passengers a year.