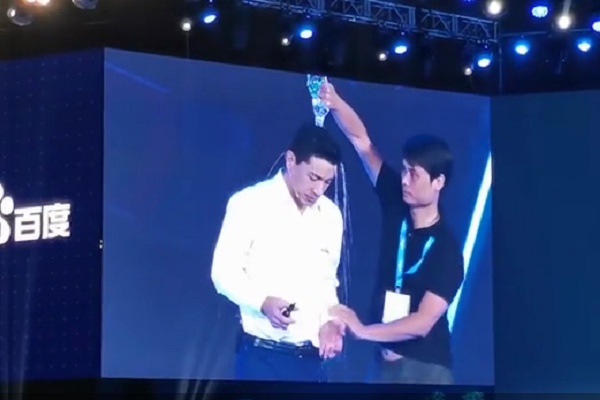 It was meant to be a day of carefully scripted moments showcasing cutting-edge technology. But that’s not the way things began at the annual developer conference put on by search giant Baidu on Wednesday and Thursday in Beijing.

CEO and co-founder Robin Li was giving a keynote speech on smart transportation early at the event when he got doused by bottle of water poured over his head by a man who rushed onto the stage.

Looking up, Li controlled his anger and surprise and asked, “What’s your problem?” as the audience of over 1,000, looked on. The crowd, including Baidu partners, developers, investors and global media, didn’t realize until later that the act was not a stunt.

The man, whose motive was unknown, was quickly taken away by security.

Li later said there will be different things happening on Baidu’s journey to transition from its roots as a search engine to an expert in artificial intelligence (AI) development. He added that Baidu’s determination in that journey won’t change.