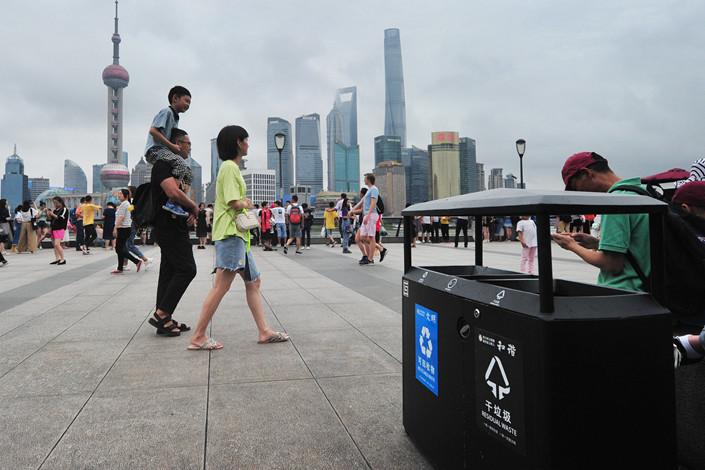 As Shanghai introduced new trash sorting guidelines, what is now the world’s largest trash incinerator has begun operating in earnest.

With the completion of its second phase, the Laogang Renewable Resource Recycling Center has increased its daily garbage-burning capacity by 6,000 tons, boosting the plant’s total annual incineration capacity to 3 million tons.

The official goal is to increase the number of waste incinerators in the city and increase the incineration rate of so-called “dry waste,” or non-compostable waste, according to Tang Jiafu, deputy director of the Shanghai Landscaping and City Appearance Administrative Bureau. At a press conference on June 28, Tang said that 80% of all municipal domestic garbage will be incinerated by 2020.

Although people in multiple cities in China have raised concerns over the polluting aspects of incineration plants — they are known to emit dioxins, heavy metals and other pollutants — the central government aims to dispose of nearly one-third of the country’s trash with waste-to-energy plants by 2030.

Wu Yuefeng, the center’s chief engineer, told the Shanghai Daily that “the slag of the burned waste can be recycled as building material.”

According to Wu, the plant will be able to handle nearly one-third of household garbage generated in Shanghai.

The new trash classification system implemented from July 1 is also part of this push, though it remains unclear how much this will help. The State Council’s plan aims for the new system to be implemented in 46 cities by 2020, with each city reaching a utilization rate of more than 35% by that time. However, industry insiders told Caixin that this goal is “too high” and will be difficult to reach.

An official from Shanghai’s appearance bureau told Caixin that current waste reduction targets in Shanghai are “realistic.” According to the municipal plan, the city aims to reduce its daily amount of dry waste to 181,000 tons by 2020, only 15.4% lower than the 2018 target.

While the garbage classification system may help, the official worried that it will be difficult to reduce the overall amount of waste due to the growing population and rising economic growth. “The annual growth rate of the amount of garbage is generally 4%,” he said. “If the population also grows, it may be even higher.”

He told Caixin that his district has promoted separating “dry” and “wet” waste for many years, but that housing renovations in recent years have caused an influx of people moving in. He is not optimistic that the amount of dry garbage will decline by next year.

Incineration will contribute drastically to cutting the amount of non-compostable waste in the city’s landfills, Wu said.