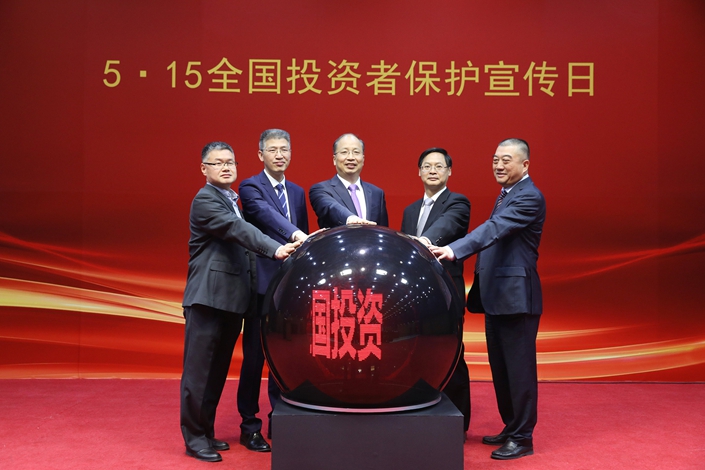 China’s securities regulator is considering allowing brokerages to tap a bailout fund if they run into liquidity problems, according to a draft regulation issued earlier this month.

Regulators are looking into how the SIPF can take a bigger role in compensating investors who lose money due to fraud or other unlawful acts by listed companies, a representative at the organization told Caixin via email. Funds raised from fining such companies could go to the SIPF, rather than state coffers, they said, where they could be used to create a dedicated compensation fund that would pay out to investors who have been burned by illegal activity in China’s securities market.

Regulators could learn from the U.S.’ Federal Account for Investor Restitution Fund (FAIR Fund) — which is a similar mechanism given legal support in the U.S. in 2002 — they suggested.

In China’s securities market, fraud cases frequently result in huge investor losses, but the complex proceedings, long wait times and huge costs to settle such matters serve as obstacles to investors. China has 150 million investors, the largest and most active group of investors in the world, Yan Qingmin, a deputy head of the securities regulator, said at an event on May 15. Of those, 95% are small and midsize investors.

The issue of protecting investors is about the livelihood of millions of people, he said.

Here are four important things to know about the SIPF.

How was the SIPF created?

The SIPF was born during a crisis in China’s securities industry. From 2002 to 2006, several brokerages failed due to poor risk management and a sluggish market. Since 2004, several have been caught embezzling client funds.

In June 2005, the State Council, China’s cabinet, agreed to create the SIPF, a joint effort of the China Securities Regulatory Commission (CSRC), the Ministry of Finance and the People’s Bank of China, the central bank. In August that year, the fund was established with 6.3 billion yuan ($916 million) in registered capital provided by the Ministry of Finance.

“It was modeled after the SIPC,” he told Caixin, referring to the Securities Investor Protection Corp., a nonprofit company in the U.S. whose mission is to “restore customer cash and securities left in the hands of bankrupt or otherwise financially troubled brokerage firms.”

Since 2004, the SIPF has been involved in the bankruptcy liquidations of 24 brokerages. It has repaid investors a total of 22.5 billion yuan, including 6.3 billion yuan that was used to buy customers’ securities.

How is the SIPF funded?

There are several different ways the SIPF gets funded. Securities brokerages are required to pay 0.5% to 5% of their annual revenue to the fund. The amount depends on each brokerage’s risk level rating. The higher the level, the more they have to pay. Currently, about 30% of the SIPF’s funding comes from these assessments on brokerages.

In the nearly 14 years since it was started, the SIPF has raised 113.1 billion yuan. At the end of May, its balance (link in Chinese) was 70.9 billion yuan.

The SIPF also gets funding from a portion of brokerage fees that the Shanghai and Shenzhen stock exchanges charge. Other funding sources include compensation income from brokerage liquidations, as well as interest on deposits and investments.

In addition, the SIPF can also apply for loans from the central bank.

What does the SIPF do?

In recent years, the SIPF’s job has grown beyond just protecting investors from brokerage failures.

One additional function is to monitor the capital flows on the securities market. The monitoring system, called the “Eagle Eye,” can oversee some 230 million accounts at 102 brokerages, 23 commercial banks and China Securities Depository and Clearing Corp. Ltd., which offers securities registration, clearing and settlement services for the country’s two major stock exchanges.

According to China’s Securities Law, the investor funds that brokerages hold should be deposited in commercial banks. Brokerages should not include those funds on their own balance sheets.

Since Eagle Eye was set up in 2013, no investor funds have been embezzled from a brokerage, a source familiar with the SIPF said.

The SIPF is also trying new things to assist investors. In 2012, it took over managing a special fund (link in Chinese) that was set up by the brokerage firm of a listed company, Wanfu Biotechnology, to compensate its investors for their losses from a case of financial fraud that preceded its initial public offering.

It also oversaw two other similar funds in 2014 and 2016. Together, the three funds doled out 509 million yuan in compensation to 34,306 investors.

As the number of dispute cases rises, the SIPF has been assigned the jobs of mediating between investors, brokerage firms and listed companies, as well as advising the courts on such cases. In 2018, Beijing No. 1 Intermediate People’s Court entrusted the SIPF to mediate 274 cases, the fund said.

The SIPF had also been entrusted to advise the court on how to calculate compensation and determine how many investors should receive restitution funds.

What is expected for the SIPF in the future?

None of this has cost the SIPF much. In 2018, the fund raised 9.1 billion yuan, but only spent 2.2 billion yuan, with 8 million yuan spent on dealing with risks and 26 million yuan on monitoring the stock market, according to its annual report.

“The huge amount of money (that it has) should not sit idle in fixed deposits,” said Tang, the law professor. “We should be concerned about its inefficiency.”

A source in the CSRC’s investor protection department said that in the future, the SIPF could follow the example of the FAIR Fund and set up a special fund to compensate investors for losses stemming from listed companies breaking the law, Caixin reported (link in Chinese). The FAIR Fund was introduced in 2002 by the Securities and Exchange Commission under the Sarbanes-Oxley Act.

However, such a reform would require China to amend its Securities Law, the source said.