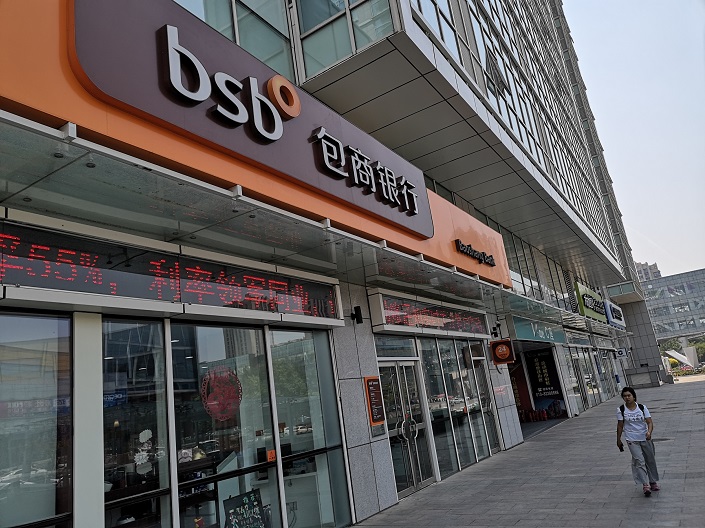 The government takeover of Baoshang Bank in May put China’s national deposit insurance fund to the test for the first time since it was set up more than four years ago. Photo: VCG

The government takeover of Baoshang Bank in May put China’s national deposit insurance fund to the test for the first time since it was set up more than four years ago.

It was the first direct takeover of a commercial bank by Chinese regulators in 20 years. Authorities moved to contain risks of the small private lender associated with the embattled billionaire tycoon Xiao Jianhua’s conglomerate, Tomorrow Holding Group. Xiao was detained in 2017 and is believed to be under investigation by anti-graft authorities.

China set up the deposit insurance fund in 2015. The concept of deposit insurance was born in the U.S. in the aftermath of the Great Depression as a way to protect the interests of depositors when banks failed. The Chinese fund’s capital comes from insurance premiums paid by financial institutions and assets from liquidated insured institutions, among other sources. Premiums make up the bulk of the fund’s income.

Previously, China relied on an administrative approach to fending off deposit losses at high-risk institutions, based on the central bank's function as the lender of last resort. This created problems including the lack of hard constraints on budgets and deadlines for risk management, and the lack of an effective accountability mechanism. Shareholders and operators of high-risk institutions did not bear the responsibility for risk and pay the corresponding costs, creating moral hazard, or a willingness to take on more risk because someone else would bear the consequences, according to banking experts.

The Baoshang takeover put the spotlight on doubts that continue to plague the nascent deposit insurance system, including the fund’s small size relative to the country’s total deposits, vague responsibilities described by deposit insurance regulations, and a lack of independence from the central bank.

Under China’s new system, when banks face failure and there’s a chance depositors will lose money, the deposit insurance fund can guarantee repayment of deposits through loans and other means, up to 500,000 yuan per depositor.

Caixin previously learned that the deposit insurance fund accumulated more than 100 billion yuan by early 2019. At that size, the fund isn’t big enough to handle high-risk banks independently and is still under the control of the central bank’s Financial Stability Bureau.

But the size of China’s fund has been growing steadily since 2015, thanks in part to China’s high savings rate and steady growth in the country’s total deposits. One senior banking analyst who asked not to be named said China’s deposit insurance fund was accumulating capital at a reasonable pace. He used Japan’s deposit insurance fund as a benchmark, pointing out that Japan began to operate its fund formally only after nearly 20 years of accumulation.

The target ratio needs to balance security with efficiency, Liu Mingyan, a researcher at China Minsheng Bank, wrote in 2015. If a heavier premium is imposed on insured banks to expand the fund, banks’ profits could suffer and banks would be incentivized to rely more on nondeposit sources of funds like bonds and interbank financing, which don’t add to deposit insurance costs, Liu said.

In China, financial authorities adopted a system combining a benchmark rate with a differential rate based on individual institutions’ risk level to control banks’ moral hazard.

“Every bank has a set of algorithms, a variety of indicators, a very thick book," one source close to the central bank told Caixin.

The rates applicable to different banks have not been publicly disclosed, but Caixin learned that the central bank ranks banking institutions in eight levels reflecting their risk-assessment ratings, with deposit insurance premium rates ranging from 0.02% to 0.16%, while one industry insider said that the average annual premium paid was 0.05%.

Even though the deposit insurance fund was established in 2015, a truly independent operating entity has not yet materialized, people close to the central bank told Caixin.

Industry insiders said they expect the fund to reach a size of more than 200 billion yuan before it can be operated by an independent institution.

Multiple ministries remain skeptical about the special purpose vehicle set up to deal with Baoshang Bank, Caixin learned. The Ministry of Finance, the China Banking and Insurance Regulatory Commission and the central bank were initially locked in a tug-of-war over who would control the institution running the fund once it was established.

According to one central bank staffer, more than 50 people from multiple branches of the central bank have been seconded to the deposit insurance business center.

"Up to now, none of the (fund’s income from) premiums has been used,” the central banker said. “They’re even afraid to touch the interest earnings generated by premiums.”

The costs incurred by the staff of the deposit insurance business center, including room, board and travel expenses, are currently taken out of the central bank’s budget, mainly from the branches of the bank where the seconded personnel originally worked, the person said.

"If the regulations are not amended, it will be difficult for depository institutions to play an effective role in risk treatment,” a person close to the central bank told Caixin.

“The imperfect risk assessment and monitoring mechanism, the imperfect information-sharing mechanism, the inadequacy of corrective measures and efforts all restrict the deposit insurance system from playing its central role in financial risk management,” Jin Penghui, a member of the Chinese People’s Political Consultative Conference and president of the Shanghai Branch of the central bank, wrote in a policy proposal earlier this year.

According to senior regulators, the relative success of the FDIC model in the United States is partly because the fund is able to intervene and take preemptive measures when a bank's capital adequacy ratio falls below a certain level. This helps to minimize the use of deposit insurance funds, preventing the insurance system from simply becoming an ATM for troubled banks.

In the second half of 2015, China’s central bank launched a deposit insurance rating system combining quantitative modeling with qualitative evaluation, aimed at helping regulators identify institutions that require intervention to limit risk. The assessment system has since been applied to more than 3,800 financial institutions.

In 2017, 426 financial institutions were rated as high-risk. By the end of June 2018, the central bank had taken early corrective measures against 194 insured institutions, including requiring the addition of capital, limiting asset growth, restricting the granting of credit for major transactions and reducing the institutions’ leverage ratio.

In addition to these measures, the central bank should also restrict activities by high-risk banks including the distribution of dividends, equity investment, the repurchase of capital instruments, the operation of high-risk assets, and the establishment of new institutions or businesses, said Wang Jingwu, head of the central bank’s Financial Stability Bureau.

This story has been updated to provide additional information about Wang Jingwu and to clarify that Baoshang Bank was the first commercial bank to be taken over by Chinese regulators in 20 years.