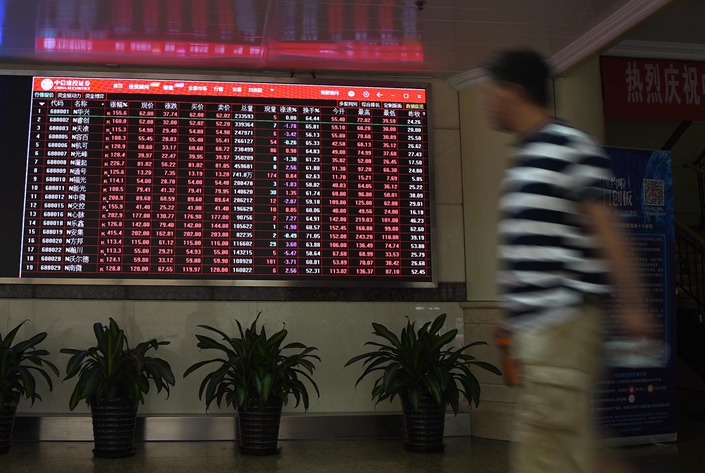 An investor walks past a display showing market movements at a securities trading department in Beijing on July 22. Photo: VCG

The turbo-charged performance of Shanghai’s new high-tech board, officially known as the STAR Market, has been staggering.

Despite the innovations adopted by the Nasdaq-like board — a market-based mechanism to price the shares of initial public offerings (IPO) and no limit on company valuations — the wave of funds that rushed into the market on July 22, its first trading day, sent prices surging. One stock, Anji Microelectronics Technology (Shanghai) Co. Ltd. was up by more than 500% at its peak.

The 25 stocks that made their debut closed up an average of almost 140% on their IPO prices and total turnover was 48.5 billion yuan ($7 billion), 70% of that of the long-established tech-heavy ChiNext board in Shenzhen, while four shares finished more than 200% higher. As relative calm descended on Tuesday, some stocks actually fell, but on Wednesday all 25 companies rose, with some prices jumping almost 50%.

This kind of frenzy certainly is no doubt related to the fact that there are no daily limits on share-price movements in the first five trading days following an IPO. The rule is designed to accommodate heavy trading and volatility as the market and prices find their equilibrium. And indeed turnover was heavy — on the first day, all 25 companies saw more than 65% of their shares change hands, with turnover in Anji stock rising to 86%.

However, these well-intentioned policies may well have underestimated the strength of the idle funds sloshing around in the A-share market — mostly in the hands of large retail investors and small midsized private funds that may be better disposed toward a market where there is no controlling force effectively influencing stock prices.

As STAR Market stocks surged on the first day, most institutional investors sold off their holdings. In contrast, retail investors piled in, which cushioned the shock from institutional selling. The investment analysis reports and risk warnings from experts were swept away in the hype. Did valuations even matter anymore? At that moment, capital was swallowed up by raw emotion, and emotion dominated everything.

At the end of a frenzied first day, some analysts pointed out that because closing prices on the first day were much higher than opening prices and turnover was high, investors that bought in at a lower price might sell on the second trading day. But this argument failed to take into account the logic of hot money. Those with hot money in their hands won’t easily give up the opportunity to keep speculating as long as there’s enough hype to sustain market sentiment. If we look at the subsequent performance of the 25 STAR Market stocks, there was little profit-taking on the second day and shares resumed their upward path on the third day.

There are two stand-out features of the STAR Market that separate it from the other boards in China — short-selling of individual stocks is allowed and margin trading is permitted from day one. But regulators have at the same time stuck to the T+1 trading mechanism, where settlement occurs one day after shares are bought or sold. So investors can’t buy and sell the same shares on the same day, which makes these features less attractive because of the risk involved in holding the shares until the next day. In the current market, where going long on a stock is the norm, only a few will dare to wade in to short-selling.

Speculation and trading that follows the greater fool theory might last for some time, but eventually prices will become more rational and long-term capital will enter the market. Regulators should be patient and let the market adjust by itself. But as this game plays out and repeats itself, there will be a lot of uncertainty that could put the stock exchange and regulators under great pressure and possibly trigger some kind of intervention through administrative measures.

At the end of the day, there’s no fundamental difference between the new STAR Market and that of the SME and ChiNext boards when they were launched — they have all been wildly popular and sucked in funds from other boards.

Yes, the new tech board does have some fancy ideas such as a market-based registration system, allowing unprofitable companies to list, and encourages firms in hot sectors such as chip innovation and biomedicine. But weren’t both the SME board and the ChiNext board also dubbed China’s Nasdaq when they started? And didn’t they both have this grand vision of the capital markets supporting technological innovation?

Do we need yet another new market that has sucked money out of existing boards? We could have overhauled the capital market without this — in fact, valuations on the main boards and the ChiNext are generally on a downward trend, so now would be a good time now to relax control over IPO prices.

It is hard to carry out piecemeal, incremental reform of the national capital market without avoiding the situation where we open new loopholes even as old ones are closed. In the past, when market participants such as issuers and intermediaries took advantage of arbitrage opportunities between the boards, regulators bandaged over the cracks. To give just one example, regulators once barred backdoor listings for the ChiNext board, but later backtracked.

The capital market is essentially a platform for companies to obtain direct financing and for transfers of equity. Regulators should be there to serve as watchdogs, and market administrators such as exchanges and those who deal with securities registration, clearing and settlement should provide the infrastructure. The rest should be left to the market. The China Securities Regulatory Commission and the Shanghai Stock Exchange followed this principle when they designed the STAR Market in terms of pricing and the IPO registration system. But judging from the speculative frenzy that characterized the board’s first trading day, the new market couldn’t escape the old problems.

If new STAR Market wants to be a success, much will depend on whether there will be a broader change in the capital market environment as a whole. If the capital market can’t shake off its age-old abuses and the kind of fraud we’ve seen at companies such as Kangdexin Composite Material Group Co. Ltd. and Kangmei Pharmaceutical Co. Ltd. doesn’t get thoroughly investigated, the incremental change represented by the new high-tech board will only store up more risks for the future.

Jiang Fei is Caixin Media’s Shanghai bureau chief and a member of the editorial board. He covers China’s securities market and its regulation.