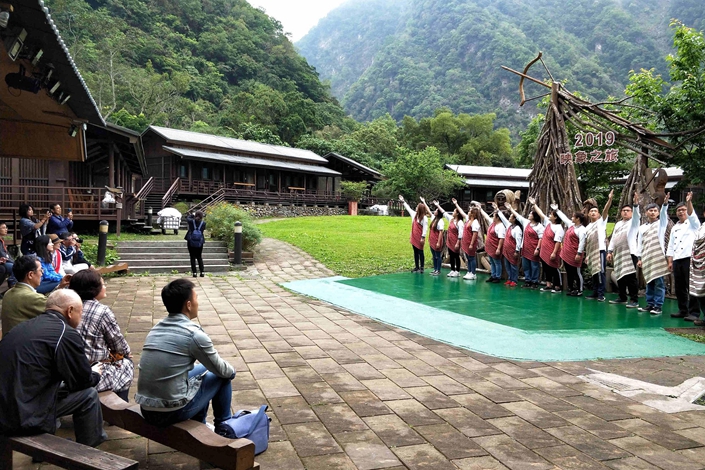 Visitors watch the staff of the Moon Village Hotel do a song-and-dance number on April 12 in Taiwan. Photo: VCG

Chinese mainland residents will no longer be permitted to travel to Taiwan outside of group tours as of Thursday, China’s Ministry of Culture and Tourism said Wednesday, citing current cross-strait relations.

The ministry said the decision was made “in view of current cross-strait relations,” without giving further explanation. Taiwan is currently gearing up for the election of its top public official in January, when Kaohsiung mayor and Kuomintang candidate Han Kuo-yu is set to face off against incumbent Tsai Ing-wen of the Democratic Progressive Party in a heated contest.

Mainland tourists accounted for 28% of all visitors to Taiwan in the first half of this year, according to the Taiwan tourism bureau. The flow of visitors from the mainland has been slowing in recent years, with 2.7 million mainland residents visiting in 2018, down from a 2015 peak of 4.2 million.

The launch of the individual travel permit program in 2011 was widely seen as a sign of improving cross-strait relations, coming just three years after mainland group tours were first allowed into Taiwan in 2008 after a decades-long ban.

Relations between Beijing and Taiwan had flourished under a previous administration led by the Kuomintang’s Ma Ying-jeou, who had a friendlier stance toward Beijing. However, the 2016 election of Tsai, whose party has long been associated with the policy of Taiwan declaring formal independence from China, has brought a cooling of relations between the two sides.