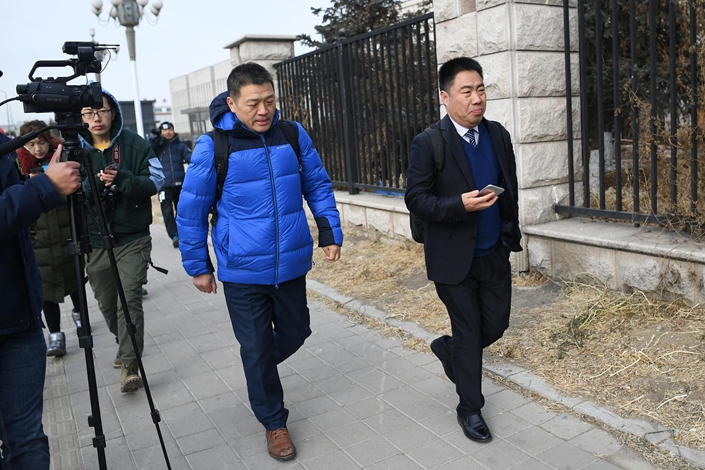 Li Jinxing (left) enters a court in Changchun, Northeast China's Jilin province, on Nov. 30, 2018. His client in this instance, Jin Zhehong, was wrongfully convicted of murder and exonerated in 2018. Photo: VCG

Prominent rights lawyer Li Jinxing was stripped of his license to practice law on the grounds that he made “improper comments” on social media, a provincial justice department has ruled.

The Shandong Provincial Department of Justice held a panel hearing in Jinan, the provincial capital, on Tuesday after Li and his representatives filed an appeal against the decision late last month. Li has been a criminal lawyer for 16 years and is known for defending a number of activists and for working to overturn wrongful convictions.

Li entrusted two legal professionals to represent him at the panel, fellow criminal lawyer Zhou Ze and He Haibo of the Tsinghua University School of Law.

He called Li a “conscientious lawyer,” whose suspension has broader implications for the profession in China. “To suspend his license certainly causes some worry about the trend of the legal system. In this case, we should discuss how to regulate lawyers’ practice and how to protect lawyers.”

The hearing, which lasted from 9 a.m. to 1 p.m., was attended by Li, Zhou, He, two officials from the Shandong justice department, and was presided over by the director of the department’s rule of law investigation department.

Li told Caixin that the hearing was strictly organized — four people who had been invited to testify were not allowed to join the hearing, and Li and his representatives were required to turn in their cell phones for the duration. After the hearing, law enforcement officers attempted to search their computers, but stopped after a negotiation.

According to the Shandong justice department, Li had made a number of “inappropriate remarks” on his Weibo account since 2017 regarding cases he was working on, which violated China’s Lawyer’s Law and guidelines for practicing law.

The law said that provincial judicial departments can revoke a lawyer’s license to practice if the lawyer violates the law within two years of the end of a previous suspension. In 2016, Li had his license suspended for one year for “disturbing court order and interfering with the normal conduct of litigation activities.”

Zhou and He argued that Li’s posts did not violate any of the provisions of the guideline to practice law. The five posts involved in the case were all normal expressions of speech and constructive criticism of state bodies and functions. There was no defamation of or attack on judicial bodies or the judicial system, nor was there intent to provoke dissatisfaction with the Communist Party of China (CPC) or the government, they said.

In one of the posts, Li joked that lawyers were treated with less dignity than Zhu Jianqiang, a pig that survived the deadly 2008 Wenchuan earthquake in Southwest China’s Sichuan province. Li made the joke after he was barred from visiting a client in detention. Zhou said that such comments were merely a critique of a detention center that violated a lawyer’s right to meet with a client and a criticism of an official’s illegal dereliction of duty.

Along with the other articles in question, Zhou and He believe that the evidence on which the suspension is based is not grounds for Li’s punishment. In addition, they and Li pointed out that the decision may not be in accordance with administrative procedures. Specifically, the basis for the administrative punishment must meet two conditions under Article 51 of the Lawyers’ Law: first, that the lawyer had already received a punishment requiring him to stop practicing; and second, another offense worthy of suspension occurs within two years after the end of the first punishment period.

However, Li and his representatives suggested that the Jinan justice department’s decision to suspend his license — on Dec. 28, 2016 — is still undergoing administrative review, rendering its effectiveness uncertain. Thus, it cannot be used as the premise for the direct suspension of his legal license.

According to He’s understanding, whether the social media posts were appropriate is up for discussion, but the posts are clearly not worth such an extreme administrative punishment.

“Under the ideal legal order, lawyers should try to speak in court and ought to be of help to the judge. But actually it turns out that in many cases, if there is no effort outside of the courtroom, fairness and justice are not available,” He wrote in his defense. “If sharp criticism is completely gone, moderate criticism becomes harsh; if moderate criticism is not allowed, silence will be considered to have an ulterior motive; if silence is no longer allowed, anything less than sycophancy will be considered a crime.”