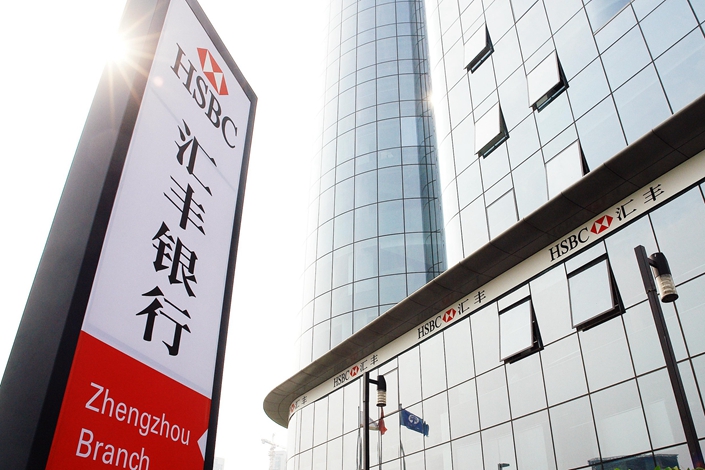 An HSBC spokesperson has denied the departure of the Greater China chief was connected to the surprise resignation of the bank’s CEO last week, to ongoing heat from Huawei, or to the bank’s recent decision to sack 4,000 staff. Photo: VCG

HSBC Holdings PLC has denied that the resignation of its Greater China head is connected with the bank’s alleged involvement in the U.S.’ investigation into telecommunications giant Huawei, an HSBC spokesperson told Caixin on Friday.

Helen Wong, chief executive of Greater China at London-based HSBC, stepped down on Friday, according to internal emails seen by Caixin, marking the bank’s second high-level executive departure in a week. Helen Wong, who joined HSBC in 1992, is leaving the bank to “pursue an external opportunity,” HSBC Asia-Pacific Chief Executive Peter Wong said in an email to staff.

An internal investigation by HSBC in late 2016 and 2017 found that Huawei Technologies Co. Ltd. maintained close financial ties to a suspected front company in Iran years after purportedly selling the unit, as the bank was trying to get the U.S. Department of Justice (DOJ) to dismiss criminal charges for the bank’s misconduct involving U.S. sanctions, according to a Reuters report in late February. The bank’s findings were later used by the DOJ to help bring its current criminal case against Meng Wanzhou, Huawei’s chief financial officer.

HSBC’s cooperation with the DOJ has led to speculation that the Chinese government would include HSBC in the “unreliable entity list” that it is developing. The list will target foreign companies, organizations and individuals that are believed to have damaged the interests of Chinese companies for noncommercial reasons.

“Regarding the ‘unreliable entity list,’ as I know, the system of an unreliable entity list is going through relevant procedures. I'd refer you to the competent authority for more details,” Chinese foreign ministry spokeswoman Hua Chunying said at the ministry’s regular press conference on Aug. 2, when asked whether HSBC would be included in the list.

“China welcomes foreign companies investing and doing business in China,” Hua said. “In the meantime, their operation in China must comply with laws and regulations.”

HSBC announced Flint’s departure after just 18 months in the top job on Aug. 5. Noel Quinn has been appointed as interim chief executive until the bank finds a successor. Neither the bank nor Flint offered a detailed explanation for his leaving.

Helen Wong, who joined HSBC in 1992, is leaving the bank to “pursue an external opportunity,” HSBC Asia-Pacific Chief Executive Peter Wong said in an email to staff.

“During her tenure as Chief Executive of Greater China she was a strong supporter of RMB internationalization and sustainable finance as well as HSBC’s presence in the Pearl River Delta,” Peter Wong wrote.

Helen Wong didn’t give a specific reason for her resignation in her farewell internal email. Caixin has confirmed the authenticity of the emails.

Caixin was unable to reach Helen Wong for comment.

In November, Hong Kong-listed Ping An Insurance (Group) Co. of China Ltd. became the largest shareholder of HSBC after raising its holdings to 7.01%.

A previous version of this story mistakenly described the number of employees that HSBC recently decided to lay off. It was nearly 4,000.