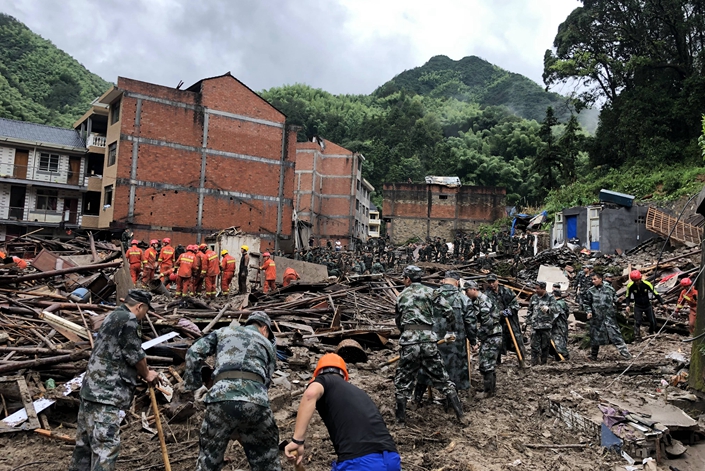 Typhoon Lekima has caused least 47 deaths on the Chinese mainland since making landfall on Saturday, according to official figures.

At least 39 people had been killed in the densely populated coastal province of Zhejiang, with nine people still unaccounted for across the province as of Monday afternoon, according to a government statement (link in Chinese).

Meanwhile, five people (link in Chinese) had been killed in eastern China’s Shandong province as of Monday morning. In landlocked Anhui province, three deaths related to the typhoon had been reported in Ningguo city as of Sunday night, city officials said (link in Chinese).

Wenzhou, a city in southeastern Zhejiang, suffered the heaviest casualties, with at least 29 people killed as of Sunday afternoon after heavy rains caused a landslide and flash floods on the outskirts of the city, according to the official Xinhua News Agency (link in Chinese).

“The water level was as high as a three- or four-story building, and rose up to that level within 10 minutes,” one staffer at a local government bureau who had witnessed the flash flood in Shanzao village, Wenzhou, told Caixin. Of the 29 people known to have been killed in Wenzhou, 23 were killed in Shanzao.

At least 6.51 million people in Zhejiang, Shanghai, Jiangsu, Anhui, Fujian and Shandong have been affected by the typhoon, including 1.46 million people who have been relocated out of Lekima’s path, according to Xinhua (link in Chinese).

Lekima, the strongest typhoon to hit Zhejiang this year, also caused transport disruptions across China, with hundreds of flights and some high-speed rail services cancelled over the weekend.

“It has been hard to enter the old town area, and the water has risen to chest level,” one resident of the Zhejiang city of Taizhou told Caixin, saying their car had been submerged for an entire evening.

China’s Ministry of Emergency Management said last week (link in Chinese) that it had sent more than 3,200 emergency response personnel to 48 response centers around the country, and the country’s meteorological agency issued a red alert — the highest level — for the typhoon on Friday, before downgrading its warning to orange on Saturday morning.

Many of the areas in the path of Lekima in Shandong had already suffered major damage from Tropical Storm Rumbia in 2018. “Last year, our greenhouses were flooded and collapsed. They have just gotten repaired this year, but are getting flooded again,” one villager from Mananhan village in Weifang city, Shandong, told Caixin.

A previous version of this story misspelled the name of Shanzao village.