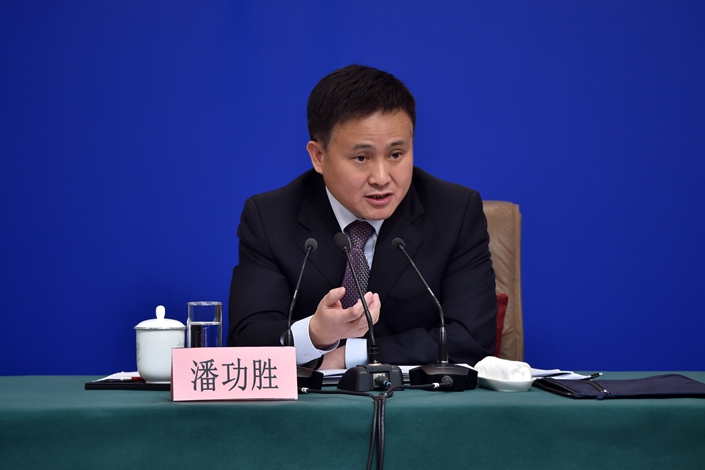 Following a wave of bond defaults last year, how has the bond market held up in the first half of 2019? Also, what’s the significance of regulators’ efforts to break the “implicit guarantee” that the government will bail out companies? Recently, Caixin asked Pan Gongsheng, a deputy governor of the People’s Bank of China (PBOC) in charge of financial markets, for answers to these questions.

Caixin: How do you view the wave of bond defaults?

Pan: Bond defaults are normal, and it’s unhealthy for a market not to have any defaults. In the past, many investors believed that bonds could not default and thus invested in bonds regardless of their ratings. However, now that the implicit guarantee — that investments will be bailed out if they sour — is broken, the pricing mechanism in the bond market can be corrected to truly reflect credit risks. We should view the default situation in an objective manner, as defaults are beneficial to the long-term development of the bond market and to a more efficient allocation of financial resources.

In the first half of this year, the value of bond defaults dropped to 44.2 billion yuan, down 46% compared with the second half of last year. The total size of defaulted bonds in the second quarter this year shrank by 14.7 billion yuan compared with the first quarter. Also, of the 32 companies that defaulted in the first half of this year, 10 had defaulted before, meaning that emerging risks were much smaller than they may have seemed.

Secondly, the overall default rate in the Chinese bond market is not that high. Compared with credit loans, at the end of 2018, the value of credit bond defaults accounted for 0.79% of the balance of credit bonds, while the ratio of nonperforming loans in China’s banking industry was 1.89%.

The credit loan market relies mainly on lending institutions’ decision-making, and in the event of a default, they can deal with risks through extensions, debt restructuring, and there’s no requirement to disclose any information. However, the bond market values information disclosure and external ratings, and has higher transparency, which could make it harder for a defaulted company to raise money later.

Do you think the mechanism for bond defaults is good enough?

According to preliminary statistics, of all the companies that defaulted on credit bonds, only a small number have repaid their debt or reached a reorganization plan. The low efficiency of tackling defaults can jeopardize investors’ enthusiasm, make it hard for companies to raise money through bond issuances, as well as increase their financing costs.

At present, the PBOC is working with relevant departments and the supreme court to study the legal issues surrounding bond defaults, and meanwhile strengthen the supervision of issuers and intermediaries. Also, the PBOC is actively developing a defaulted bond trading market, and researching the introduction of market-based bond default disposal methods.

Market participants have been concerned with the credit risks of some financial institutions following the regulatory takeover of Baoshang Bank. How do you see this situation?

Similar to the bond market, the implicit guarantee has also long existed in the interbank market. Some small and midsize financial institutions have relatively low risk awareness, relying too much on interbank business to expand, which has led to unhealthy balance sheets. It is necessary to clear out unsustainable institutions as supply-side structural reform in the financial sector continues.

The implicit guarantee was broken after the Baoshang Bank takeover. In the process of repricing financial institutions’ credit risks, it is normal for the market to show concern or avoid small and midsize institutions with unstable operations. For sure there have been some overreactions, but this is how financial markets generally work: overreacting at the beginning and turning rational over time. This also served as a good risk education opportunity for small and midsize institutions that tend to operate more radically.

Meanwhile, we must solve problems from a long-term perspective, and beware of accumulating risks that could lead to systemic risks.

To address the difficulties faced by nonbank financial institutions such as brokerages and funds, the PBOC and relevant departments have asked some top brokerages to provide liquidity support for small and midsize nonbank institutions. What are the implications of this move?

Top brokerages have a relatively good understanding of risk situations of their counterparts in the industry. If they can offer liquidity support, especially to small and midsize brokerages and funds, the potential irrational behavior of the market — which could unintentionally do harm to other institutions — could be avoided. It should be pointed out that after the market returns to normal, it will still be market entities that ultimately determine specific financing channels and methods.

The market has been closely following the phenomenon of structured bond issuance, which is the result of collaboration between issuers, brokerages and privately offered fund firms. How do you see this?

Structured bond issuance is known as a unique way for some Chinese companies to secure funding they couldn’t otherwise obtain. Under such a practice, they purchase a portion of their own offerings and pledge the bonds for loans. Such a practice, however, is harder to conduct and comes at a higher cost. The tactic began spreading in 2018 and some lower-rated privately owned companies and local government financing vehicles adopted this approach.

Structured bond issuance reflects the lack of credit differentiation and insufficient risk tolerance in China’s financial market. If the financial market had a high degree of credit differentiation, issuers that could not issue bonds in the first place might see higher financing costs when pledging bonds or even fail to get loans with such collateral, which would destroy the premise of structured bond issuance.

Similarly, if the bond market had a sufficient degree of risk tolerance, and high-risk issuers could raise funds as long as they are okay with a high cost, there’s no fertile ground for structured bond issuance.

Following the opening-up of the Chinese bond market, in 2018, the net inflow of foreign capital to the bond market totaled about $100 billion, accounting for 80% of total inflows to emerging markets. Under current circumstances, how far could such policy go?

The opening-up of the bond market is an important basis for deepening the reform of interest rate marketization and promoting the internationalization of the yuan.

Starting 2016, the opening-up of the bond market started to accelerate, with measures including expanding the types of eligible overseas institutional investors, abolishing limits on overseas institutional investors’ investment quota, and promoting the opening-up of the ratings industry. Also, among the 11 new measures released recently on further opening up the financial sector, many are related to the bond market.

A total of 1,846 overseas investors had entered the interbank market by the end of June. They held bonds worth 1.96 trillion yuan, double the figure at the end of 2015. In April this year, Bloomberg began adding yuan-denominated Chinese government and policy bank bonds to its Bloomberg Barclays Global Aggregate Bond Index, signaling the international market’s recognition of the Chinese bond market.

Although the bond market has made positive progress in opening up, there is still a big gap between China and international developed markets and some other emerging markets. At present, the balance of overseas holdings accounts for only 2.4% of the total balance of the Chinese bond market. Overseas holdings account for 8.3% of total balance of China’s sovereign bonds. Very few overseas investments are made in corporate credit bonds.