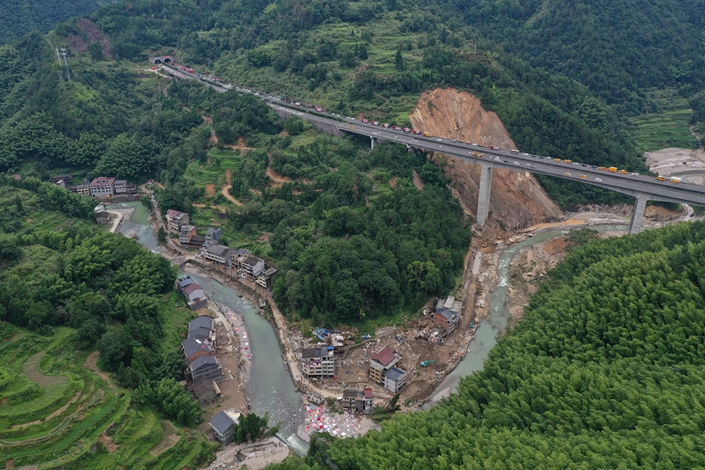 Collapsed buildings can be seen along the river Sunday in Shanzao village in Wenzhou, East China's Zhejiang province. Photo: VCG

Locals and officials have provided conflicting explanations of what caused the landslide in Zhejiang that killed dozens of people in one village after Typhoon Lekima hit the coastal East China province last week.

The landslide happened at 5 a.m. on Saturday in the mountainous Yongjia county of Wenzhou city, trapping residents and damaging homes in Shanzao village. As of Monday afternoon, 27 people from the village were confirmed dead while five remained missing. Officials say the landslide was an unforeseeable disaster caused primarily by torrential downpours triggered by the strongest typhoon to hit China this year.

But locals who saw multistory buildings swept away by the landslide told Caixin they suspected that negligence may also be partly to blame.

One hundred and twenty people live in Shanzao, which is located in a narrow valley on the banks of a tributary of the Nanxi River.

One villager who declined to be named said they thought the landslide was related to a drainage channel buried under the viaduct that passes over the village. The villager said the long-term release of water from the channel, which sits on the side of the viaduct where the landslide occurred, may have affected the stability of the land around the viaduct.

The viaduct, part of Zhejiang’s Zhuyong Expressway, was completed in January 2010.

Multiple villagers also said construction along some parts of the Nanxi tributary had narrowed the stream, making the area more prone to flooding. Some of the upstream parts of the stream had indeed been narrowed by one or two meters, Xu Wenhai, the Communist Party branch secretary of Shanzao village, confirmed.

When Caixin asked at the Monday press conference if the landslide could have been partly caused by the viaduct and the narrowing of the stream, Zhou Junwu, deputy commissioner of Yongjia, was suddenly approached by a staffer over an “urgent matter” before leaving the venue.

However, Xiang Wei, an engineering professor at China University of Geosciences, said that photos of the landslide’s aftermath did not appear to show any instability around the foundation of the viaduct.

Xu Wencheng, a 65-year-old man found dead in his destroyed home, was the 27th known victim of the landslide. Xu’s daughter, Xu Feifei, who was not present at the time of the landslide, told Caixin that her parents’ three-story home had been seriously damaged and that the first floor was covered in around 40 centimeters (15.75 inches) of mud.

When Caixin visited Shanzao on Monday, almost every house in the area showed signs of flood damage. Mao Liqin, who lived in a four-story building across from the Xu home, said she and two family members fled to the roof of their home on the morning of the landslide, but that the mud had continued to rise. Eventually, they jumped onto the hillside behind the house and climbed upward to escape.

Mao said the tide had risen up from ground level to the fourth floor in under 10 minutes.

At one spot around 50 meters (165 feet) away from the viaduct in the path of the landslide, an entire three-story building had been swept away, local residents told Caixin. The building’s foundations were still visible through the mud on Monday. Xu Chengzhong, who lived in the building but wasn’t there that evening, said five of his family members had been killed in the landslide.

Local officials, like the residents, appear to have also been taken by surprise.

Official documents show that Wenzhou’s city government initiated a typhoon emergency response at noon on Friday, meaning emergency personnel from around the city would be transferred to areas considered high-risk. Shanzao wasn’t considered one of those areas, said Chi Zhangcheng, a Yongjia county official.

The landslide was an “unexpected natural disaster,” the deputy commissioner said at the press conference on Monday.