Despite Top Planner’s Order, It Is ‘Unrealistic’ for Beijing to Drop New-Energy Car Plate Quota 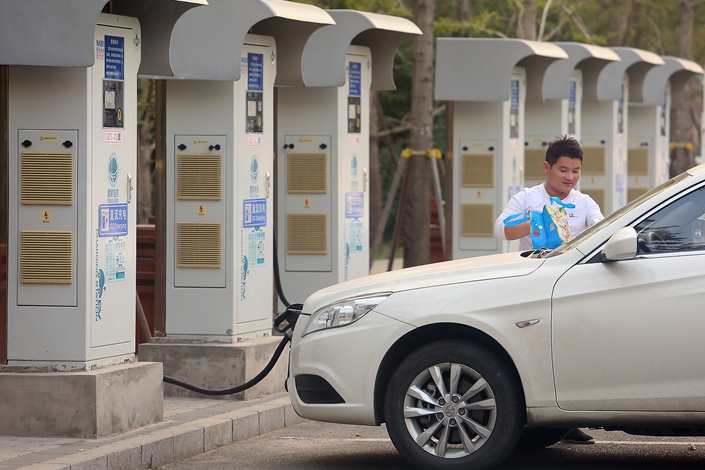 The owner of an electric car charges his vehicle at a charging station in Beijing in October 2018. Photo: VCG

Congestion concerns mean it is “unrealistic” for Beijing to drop its quota on the number of new license plates for new-energy vehicles it hands outs to residents, even though the country’s top planner has ordered all cities to do so, a source close to the local government said.

The National Development and Reform Commission (NDRC) issued a raft of policies to boost consumption in June, one of which said all limits on the issuance of license plates to those buying new-energy vehicles should be scrapped.

The NDRC has also urged major cities to consider loosening their license plate restrictions for cars that run on fossil fuels.

New-energy vehicles — which include pure electric, hybrid and fuel cell cars — have been promoted for years by China’s central government to both fight pollution and foster the country’s role in the emerging sector.

However, it is “unrealistic” for the capital to scrap its quota on new-energy cars, according to a source close to the Municipal Commission of Transport. That source said the municipal government is now more focused on combating congestion, for which the license plate quotas are an important tool. Beijing is the only part of China to have a quota for new-energy car license plates.

The source said Beijing’s plan to keep the number of cars on its roads to under 7 million has not changed.

As of the end of last year, there were 6.08 million cars in the capital, of which about 200,000 were new-energy vehicles. The city currently issues 60,000 new-energy car license plates a year, with a waiting list of 430,000 applicants, who are chosen by lottery.

Both new-energy and convention carmakers have had a tough time in China of late. New-energy vehicle sales fell 4.7% in July, marking the first monthly decline in over two years. Overall car sales fell for the first time in two decades last year, and the China Association of Automobile Manufacturers predicts this year will see another drop in sales.