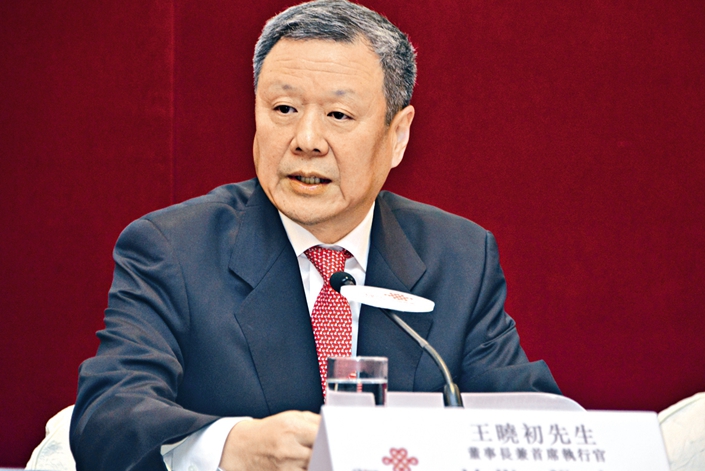 Shares of China’s three major wireless carriers rallied on Thursday, defying broader market weakness, after one of the three, China Unicom, said the trio were in discussions to share resources and costs in the construction of expensive new 5G networks.

After taking a more cautious stance in previous generations of wireless network-building, Beijing has become far more aggressive in trying to make China a leader in 5G services that will power cutting-edge services of the future like telemedicine and autonomous driving. That stance has taken on new urgency in the ongoing U.S.-China trade war, which has seen the U.S. ban American companies from selling products to leading Chinese 5G equipment-maker Huawei.

As pressure has mounted to quickly build new networks in China, many investors worried that carriers might sharply boost their spending to meet Beijing’s targets. But comments by Unicom President Wang Xiaochu at a Hong Kong event to discuss the company’s latest financial results eased those concerns.

The day after Wang made his remarks, Unicom shares were up more than 11% in late afternoon trading on Thursday in Hong Kong. China Mobile and China Telecom’s shares also posted gains of 5.3% and 6.8%, respectively. Those strong gains contrasted with just a slight gain for the benchmark Hang Seng Index, which also defied a major sell-off the previous day on Wall Street.

At the Wednesday event to discuss Unicom’s latest financial results, Wang said Beijing has been encouraging the three carriers, all state-owned, to share the high costs of 5G network construction, operation and maintenance. He also confirmed that Unicom has held discussions with both China Mobile and China Telecom about such cooperation.

“China Unicom will definitely participate in cooperation with any one or several companies,” he said, adding that a tie-up with China Telecom could make most sense due to the closeness of the two companies’ 5G spectrum. China Mobile is the country’s dominant carrier with about 60% of the market, while Unicom and China Telecom control the rest.

Unicom confirmed at the Wednesday event that it is planning about 58 billion yuan ($8.3 billion) in capital spending this year, unchanged from its forecast earlier in the year, Jefferies analyst Edison Lee wrote in a research note. He added that of the 58 billion yuan, about 8 billion yuan would go to 5G network construction.

At the meeting, Wang also said that Unicom has held discussions on potential network sharing with China Broadcasting Network Corp., a company set up in 2014 by combining many of the nation’s regional cable TV operators. Last week China Mobile confirmed it has also held similar discussions with China Broadcasting Network, which was the fourth recipient of a 5G license from China’s telecom regulator earlier this year.

Unlike the three carriers, China Broadcasting Network has little or no experience operating a wireless network and instead is focused on fixed-line broadband and cable TV services. The company is also relatively cash-poor compared to the other three 5G license recipients.

“Whether we will deepen our discussions will depend on situations at the two companies,” Wang said of the talks between Unicom and China Broadcasting Network. “But recently we have been talking a bit more with China Telecom and China Mobile.”