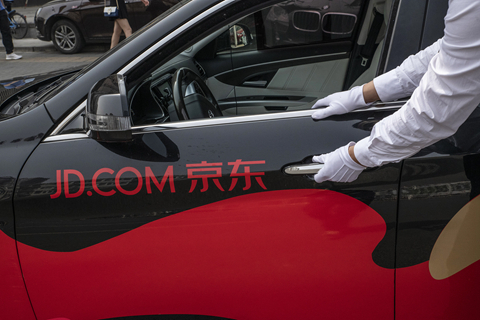 JD.com has asserted that it was unaware of the transactions involved in Camsing’s financing transactions. Photo: VCG

A former employee of China’s No. 2 e-commerce company JD.com Inc. has been detained on suspicion of involvement in the massive supply-chain financing fraud of Camsing Global, sources close to the matter told Caixin.

The employee, surnamed Xu, was a procurement executive at JD.com’s 3C division, which covers sales of computers, telecommunications and consumer electronics, a person familiar with the situation said. Xu played a key role in the Camsing case and appeared as JD.com representative in several deals involving the e-commerce company and Camsing Global affiliates since 2016, the person said.

JD.com’s human resources department told Caixin that internal records showed Xu is no longer a company employee, without giving more details. A name card of Xu obtained by Caixin showed that he was the procurement manager of the telecom products department of the 3C division.

A JD.com employee told Caixin that Xu departed in May, along with several members in his team. Caixin was unable to reach Xu for comment.

The cause of Xu’s departure is unclear. JD.com launched a series of internal restructurings late last year involving a wide range of departments.

In response to an inquiry from Caixin, JD.com said it has no information about Xi’s detention and can’t verify it.

“As the Camsing case has entered the stage of judicial investigation, we suggest that the information published by the judicial authorities shall prevail,” JD.com said.

Private entertainment-to-health group Camsing came into the public spotlight in early July when two of its listed arms confirmed that Lo Ching, Camsing’s founder, was detained by Shanghai police for criminal investigation of alleged fraud.

The news quickly sent ripples through the market as a number of fund management companies have exposure to financing projects related to Lo’s companies.

Her companies packaged up accounts receivable — money owed by customers — into asset management products and sold them to investors. The products are mainly backed by Camsing’s claims on business partners including JD.com, Suning and China Mobile. But as Lo came under investigation, many of Camsing’s business transactions with partners were questioned for their trustworthiness.

Noah detected risks from products linked to Camsing in May after the company made suspicious account changes and requested an increase in a fundraising amount related to transactions with JD.com, Caixin learned. Noah’s report on Camsing triggered the police investigation.

But JD.com and Suning denied involvement in Camsing’s financing and said the documents provided for the accounts receivable were fake, although financial institutions asserted that they sufficiently verified all the transaction documents with representatives from the companies and received actual payments from accounts owned by JD.com and Suning.

JD.com issued two statements July 9 and 10 distancing itself from Camsing and accusing Camsing of falsifying transaction documents. The company said it reported the case to police.

Analysts said it is possible that some employees of Camsing’s business partners worked from inside to collude with Camsing on fake deals, but that needs further police investigation.

Others said the questionable transactions between Camsing and the e-commerce giants may suggest some nonexistent business that retailers often use to inflate sales figures by round-tripping shipments through Camsing affiliates. The point is to make companies’ financials look better for investors.

“It is unclear whether e-commerce companies are aware that suppliers could use the transactions to obtain fake supply-chain financing,” an e-commerce industry source said.

Caixin learned that since 2015, Camsing-affiliated companies started raising funds through asset-management products backed by accounts receivable from Suning, JD.com and other business partners. The size of the fundraisings ranged between tens of millions and hundreds of millions of yuan, paying annual yields between 7% and 10%. Around a dozen financial institutions including Cofco Trust, National Trust and Donghai Ruijing Asset Management Co. have managed Camsing’s products.

A large portion of contracts with JD.com used by Camsing for financing involved smartphone purchase deals, which was overseen by Xu’s department, Caixin learned.