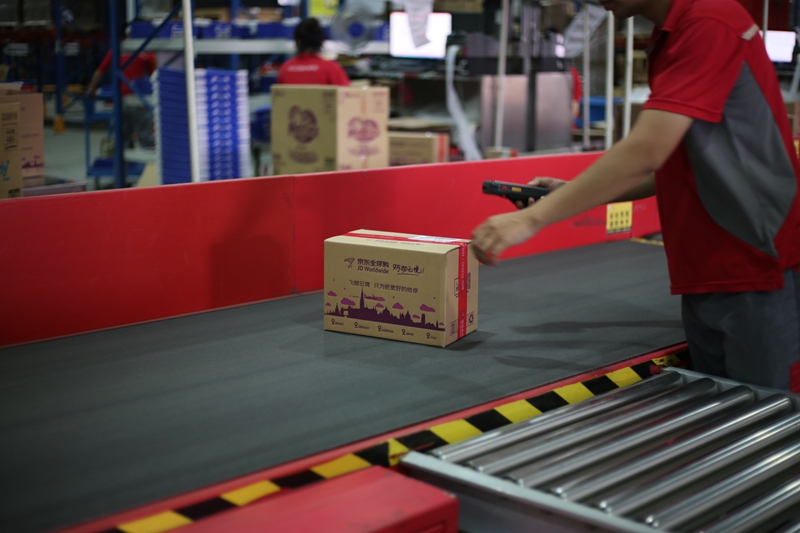 Until last week, Hong Kong businesswoman Lo Ching largely flew under the radar as she built her Camsing Global business conglomerate on a murky web of financing involving billions of yuan, including accounts receivable of e-commerce giants JD.com and Suning.com.

The 48-year-old businesswoman came under the spotlight when two listed companies she controls confirmed her detention by Shanghai police for criminal investigation of alleged fraud. The news quickly sent ripples through the market as a number of fund management companies have exposure to financing projects related to Lo’s companies.

Caixin learned that Lo was arrested June 20 on an accusation of fraud levied by Noah Holdings Ltd., which manages 3.4 billion yuan ($494 million) of asset management products for Camsing. U.S.-listed Noah later said in a statement that eight privately offered funds sold by its subsidiary Shanghai Gopher Asset Management for Camsing are in danger of default. The products were backed by accounts receivable with China’s No. 2 e-retailer JD.com, according to Noah.

The case sheds light on loopholes and potential risks in China’s often opaque supply-chain finance market, analysts said. Companies often package up their accounts receivable — money owed by customers — into asset management products and sell them to investors. This gets the selling companies their money more quickly, even at a discount, while providing an attractive return for investors based on the spread between the receivables’ face value and the discounted purchase price. The amount of securities backed by corporate accounts receivable is estimated at more than 500 billion yuan.

The fall of Camsing also shone a spotlight on the activities of some e-commerce platforms inflating sales figures by round-tripping shipments with business partners, Caixin learned. The point is to make companies’ financials look better for investors.

Sources told Caixin that police detained more than 10 Camsing employees and a staffer from Noah who was in charge of business with Camsing. Investigators are calling it “a massive case,” sources said.

The investigation set off finger-pointing among fund managers and Camsing’s business partners related to the fundraising. More asset managers may be caught up in risks related to Camsing’s financing. Yunnan International Trust Co. Ltd. followed Noah in reporting to police about 1.5 billion yuan of outstanding products it managed for Camsing that are backed by accounts receivable from e-retailer Suning.

Caixin learned that about a dozen asset management companies have handled products for Camsing and its affiliates. The four biggest asset managers, including Gopher, Yunnan International, Shanghai Mosan Factoring Co. Ltd. and Xiangcai Securities, have a combined 9 billion yuan of products outstanding.

The investment vehicles are mainly backed by Camsing’s claims on business partners including JD.com, Suning and China Mobile. JD.com and Suning denied involvement in Camsing’s financing and accused the company of falsifying transactions for the accounts receivable.

Lo rarely appears in public reports. People who know her say she is a cool-headed businesswoman. According to Camsing’s website, Lo founded Camsing in Hong Kong in 1996 with primary businesses in intellectual property incubation and brand licensing.

Nor does Lo’s personal wealth seem striking. Investment documents showed that most of the asset management products issued by Camsing and affiliates are guaranteed by Lo’s personal assets. However, public records showed that Lo’s assets totaled less than 40 million yuan including her properties, vehicles and bank deposits.

A hedge fund manager who did research on Camsing said the company’s business mainly includes electronics sales, financing services for retailers and procurement for state-owned enterprises. Although the company said its annual revenue tops 20 billion yuan, “we believe its actual revenue is only around 6 billion yuan to 7 billion yuan,” said the fund manager, whose company decided to short Camsing International’s Hong Kong-traded shares. Camsing International’s shares touched a high of HK$9.78 ($1.25) each on April 12 and dropped to HK$0.50 as of July 11.

The last time Camsing made international headlines was in May 2017 when it acquired Stan Lee’s POW! Entertainment for $11.5 million. The deal ended up in court as Lee filed suit in May 2018 accusing POW! Entertainment of colluding with Camsing to steal his name and likeness rights. The case was later dropped by Lee, who died in November.

Caixin learned that since 2015, Camsing-affiliated companies started raising funds through asset-management products backed by accounts receivable from Suning, JD.com and other business partners. The size of the fundraisings ranged between tens of millions and hundreds of millions of yuan, paying annual yields between 7% and 10%. Around a dozen financial institutions including Cofco Trust, National Trust and Donghai Ruijing Asset Management Co. have managed Camsing’s products.

In November 2015, Lo acquired Singapore-listed Jacks International for S$20.5 million ($15.1 million). The company was later renamed Camsing Healthcare as the health subsidiary of Camsing. By the end of 2018, Lo held more than 83% of Camsing Healthcare.

While acquiring listed firms, Lo pledged most of her holdings to financial institutions for loans. Records of the Hong Kong bourse showed that in 2017 and 2018, Lo repeatedly pledged her stakes in Camsing International to CSC Financial, Founder Securities and Changjiang Securities. In 2018, she pledged all her holdings in Boxin International to a Hangzhou-based investment company. The shares have been frozen by courts since her detention.

Capital flows among Camsing’s affiliated companies are dizzying, the hedge fund manager said. The company works with dozens of financial institutions to offer trust and wealth management products with funds flowing among dozens of subsidiaries, the manager said.

“The company seems starving” for capital, he said.

Following the arrest of Lo, financial institutions and Camsing’s business partners have raced to contact police claiming to be victims, Caixin learned.

Asset management companies including Gopher and Yunnan International publicly declared that they sufficiently verified all the transaction documents involved in Camsing’s fundraising projects and received actual payments from accounts owned by JD.com and Suning.

But JD.com and Suning denied involvement in Camsing’s financing and said the documents provided for the accounts receivable were fake.

“Institutions were appalled,” said a person close to the matter.

Gopher’s 3.4 billion yuan of outstanding products were backed by payments from Beijing JD Century Trade Holdings Ltd., a unit of JD.com. A person close to Gopher said the asset manager verified every transaction between JD Century and a Camsing unit and signed off on the documents with JD.com’s representatives or through mail.

Yunnan International also said its employees visited Suning’s office in Beijing and witnessed Suning representatives to sign off on documents.

Although JD.com and Suning said Camsing is a supplier, they both denied they were aware of the transactions involved in Camsing’s financing transactions. A Suning spokesperson told Caixin that all of the company’s procurement seals are kept in its Nanjing office and none of the contracts could be signed in Beijing.

But industry experts said questions remain as bank transaction records indicated that payments were made by units of JD.com and Suning to Camsing’s accounts managed by asset managers. A bank source said falsifying corporate accounts to make such payments would be very difficult.

The opaque transactions at the center of the dispute may suggest some non-existent business that retailers often use to inflate sales figures by round-tripping shipments through Camsing affiliates, separate sources said. They declined to be identified because the discussions are private.

Documents obtained by Caixin suggested some questionable transactions between Suning and its suppliers early this year. Contracts show that Guangdong Kangan, a wholesaler affiliated to Lo, signed two contracts worth a total of 117.6 million yuan ($17.1 million) to buy goods from Hangzhou Chenghe Supply Chain Management Co. Ltd. in January. Some of the goods were to be sold to Suning and shipped directly to Suning’s distribution warehouse in Nanjing by delivery company Best Express, according to the contracts and consignment notes, or delivery documents, obtained by Caixin.

Caixin’s inability to verify the deliveries suggests there were no real purchases and that the invoices were part of a continuous loop of buying and selling between Suning, Kangan and Chenghe that served to inflate the retailer’s gross merchandise volume, a metric used by the e-commerce sector to show the total value of goods sold through an online marketplace or platform. Suning did not respond to a Caixin request for comment.

The practice of faking or inflating sales figures, even among big players such as JD.com and Suning, is an open secret in the e-commerce industry, several people familiar with the matter told Caixin.

“It is unclear whether e-commerce companies are aware that suppliers could use the transactions to obtain fake supply-chain financing,” an e-commerce industry source said.

Caixin learned that Suning has engaged lawyers to investigate its business with Camsing-related companies.

Company documents showed that in 2018, Suning had accounts payable to Camsing and affiliates totaling 4.3 billion yuan, while JD.com had 1.3 billion yuan.

Liu Jiefei contributed to this story.