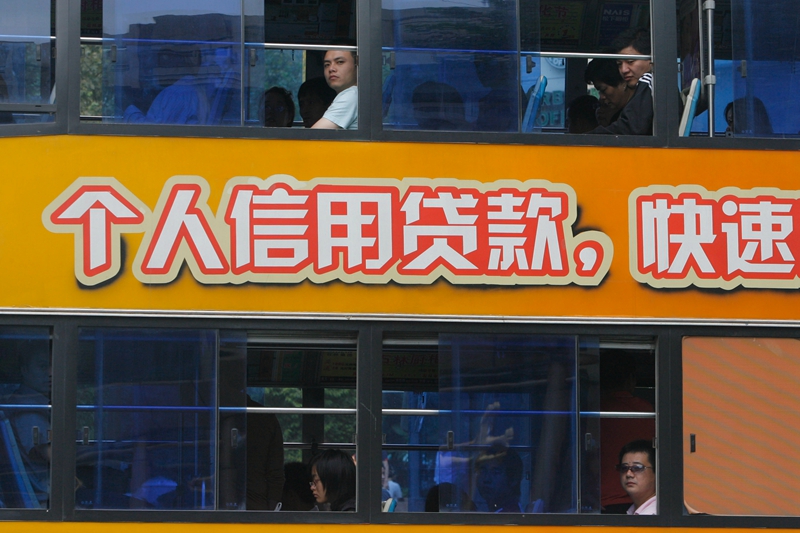 Household leverage of Chinese families reached 53.2% of GDP at the end of 2018. Photo: VCG

Like many private entrepreneurs, Wang Yin took advantage of the cheap credit provided by the government after the global Financial Crisis a decade ago. In 2009, the Wenzhou businesswoman borrowed 450 million yuan ($63.5 million) from seven local banks and poured it into the family’s stainless steel factories.

Wang, in her late 50s, invested the funds in plant expansion and stockpiling raw materials. But the market quickly changed after 2011 as rising financial market risks forced banks to tighten controls on loans, jack up interest rates and require personal loan guarantees from Wang and family members, she says.

At the same time, the Wang business suffered a slowdown. In its heyday, the Wang family owned companies with billions of yuan in assets, shipping products to 13 countries. But the operation she ran for 32 years went bust in 2014. After she sold all the assets in 2015, Wang’s company filed for bankruptcy but was still short of repaying 250 million yuan. Wang and eight family members are still under pressure to pay up.

Under Chinese law, individuals who provide personal guarantees for business-related borrowings retain liability even when their companies go bankrupt. In the 1986 Enterprise Bankruptcy Law, China set up a system for businesses to seek debt relief through restructuring and bankruptcy proceedings. However, there is no way for individuals to obtain legal relief from unaffordable debts due to the absence of personal bankruptcy law.

A bankruptcy system for individuals could provide protection for entrepreneurs who are “honest but unlucky” and allow them to make fresh start, said Ren Yimin, a bankruptcy lawyer at Capital Equity Legal Group. It would also ensure that creditors are fairly compensated and create as a standard market-exit mechanism, he said.

The risk of falling into debt is also rising for members of the general public because of easier access to consumer credit. Government data showed that about 600 million Chinese people owed total consumer debt of 37.8 trillion yuan by the end of 2018 as they borrowed for education, tourism and purchases of homes and cars. Household leverage reached 53.2% of GDP at the end of 2018, up from 44.9% in 2016, official data showed.

“The rising leverage ratio exposes Chinese families to greater debt risks in the face of unexpected incidents such as unemployment, disease, divorce or natural disaster,” said Wu Xiaoling, former vice chairwoman of the Financial and Economic Affairs Committee of the National People’s Congress (NPC) and a former central bank governor.

Efforts to set up a personal bankruptcy system have been stalled for years over concerns that some debtors might take advantage of the system to ditch their obligations. There have also been disagreements on key issues such as how much breathing room should be granted to debtors.

The pace picked up this year as some local authorities made moves to test local personal bankruptcy systems. In May, a court in Taizhou city, Zhejiang province, launched a pilot program to help individual debtors seek relief through court rulings. Authorities in Wenzhou also reportedly studied similar trials.

There are still arguments over how these local experiments could work. In July, a key policy document issued by the central government outlined a roadmap to improve the market-exit mechanism for poor businesses and proposed to set up a national personal bankruptcy system.

The accelerated efforts reflect the country’s growing desire to explore solutions for personal debt issues raised by the expansion of the private sector. Companies can be revived through bankruptcy restructurings, but the owners and their families can’t get rid of liabilities, said Capital Equity Legal Group’s Ren. Individuals cannot be temporarily relieved from their debts and receive a chance to “rise from the ashes,” Ren said.

“In practice, some entrepreneurs with such concerns often try to avoid bankruptcy of their failed business, which undermines the implementation of the Enterprise Bankruptcy Law,” Ren said.

Many entrepreneurs in Wenzhou, China’s private business hub in the eastern Zhejiang province, are mired in credit crises after years of debt-fueled business expansion hit a wall as economic growth slowed, Wang said. While some like Wang are trying to repay debts from personal assets, others may have fled or even committed suicide.

Under the most common personal bankruptcy systems like those in the U.S., Canada and Europe, debtors can enroll in debt relief or property exemption programs to have a portion of their debts forgiven by creditors, allowing them to return to normal life.

Debtors may be restricted from certain social activities or spending for a period until they sort out their finances, according to the NPC’s Wu. A personal bankruptcy system also would make the compensation to creditors more transparent, Wu said.

Without a proper exit mechanism for individuals, many debt-laden private entrepreneurs in China choose to flee, leaving creditors on the hook, analysts said. Even courts face difficulties implementing rulings in debt disputes because of the lack of assets for compensation or the absence of debtors. It also kills the possibility for reviving private companies through restructuring.

The lack of a personal bankruptcy system will undermine China’s effort to build up social integrity, said NPC’s Wu.

A 400-page regulation with 178 articles was completed in 2016 and submitted by the city government to the NPC for review. No further development has been published.

Lu Lin, a lawyer who led the drafting of the Shenzhen regulation, said national lawmakers expressed many concerns over the draft regulation and are still discussing it.

The Taizhou city government in Zhejiang made a bolder move. On May 8, the intermediate court in Taizhou issued a set of interim regulations to deal with personal debts in response to the Supreme People’s Court’s call to clean up long-stalled cases. The regulations allow debtors who have good credit records but can’t repay their debts to apply for insolvency. Although the Taizhou court didn’t designate the regulation as a personal bankruptcy rule, it follows some standard practices of common personal bankruptcy systems.

Comments on Taizhou’s experiment varied. While some experts lauded the city as a pioneer in exploring personal bankruptcy in China, others voiced concern that a local practice would undermine of the consistency of national legislation and create an opening for debtors to seek arbitrage.

Chen Xiahong, a bankruptcy law expert at the China University of Political Science and Law in Beijing, argued that there should be only one personal bankruptcy system that is applied equally nationwide.

The central government signaled the same stance. A senior official at the National Development and Regulatory Commission told media in July that building a personal bankruptcy system will start with legislations based on social consensus.

A step forward in a long journey

A document release July 16 marked a step forward. The document, issued by 13 central government ministries, for the first time call for the creation of a personal bankruptcy system in China.

The guidelines pledged efforts to solve individuals’ debt liabilities linked to business bankruptcy, allow individuals to seek forgiveness from creditors for business-related debts they guaranteed, and gradually set up a system to deal with personal bankruptcy.

Liu Junhai, a law professor at Renmin University, said the guideline provided a clear roadmap for China to move toward a personal bankruptcy system. The first step is to address the plight of entrepreneurs like Wang Yin by separating them from the liabilities of their businesses, Liu said.

But Liu said there are still many challenges facing China’s legislators and policymakers in working out a personal bankruptcy system. For instance, a lack of a sound personal credit system and a lack of transparency of personal assets of many entrepreneurs will hinder progress.

Experts are also debating more-detailed issues such as whether a special government agency should be set up to oversee personal bankruptcy cases and play the role of trustee, or whether a certain type of commercial entity should be authorized to handle the matters.

There could still be a long way to go for China’s national personal bankruptcy system as the legislation has yet to be included on the agenda of the national legislative body.

Some legal experts like Guangdong lawyer Xiao Shengfang have suggested a shortcut by amending the existing Enterprise Bankruptcy Law to include new articles regarding personal debt. Such a move may shorten the legislative procedure to three to five years, experts said.

But many others predict a longer process. According to Wu, the NPC has launched studies on issues regarding personal bankruptcy. But it will “take a while” for the system to be set up, Wu said.